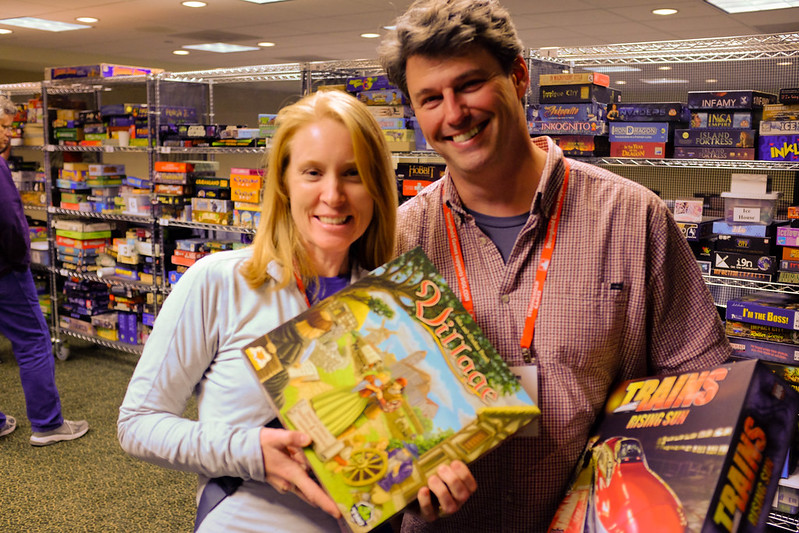 I went to BGG.CON again this year, this time Julie joined me and we hung out with friend Jim for the weekend. This was "9 out of 10" for Jim and me, so of course I'll share my previous history writing about the excellent convention.

My History of BGG.CON Posts

I screwed up my hotel reservation early in 2014 and booked the prior weekend. By the time I figured it out, the main hotel (Hyatt Regency) was full and I had to look elsewhere. I booked us a room at the Grand Hyatt. While I would have preferred to be in the main hotel, the Grand Hyatt was nicer with a better room, better views, better exercise room, and it was nice to get away from the crowd each night. It would usually take us about 10-15 minutes to get the Hyatt shuttle between the two hotels, except for the time we mistakenly boarded the Hyatt Place shuttle and headed off the DFW property. That only cost us about 40 minutes. 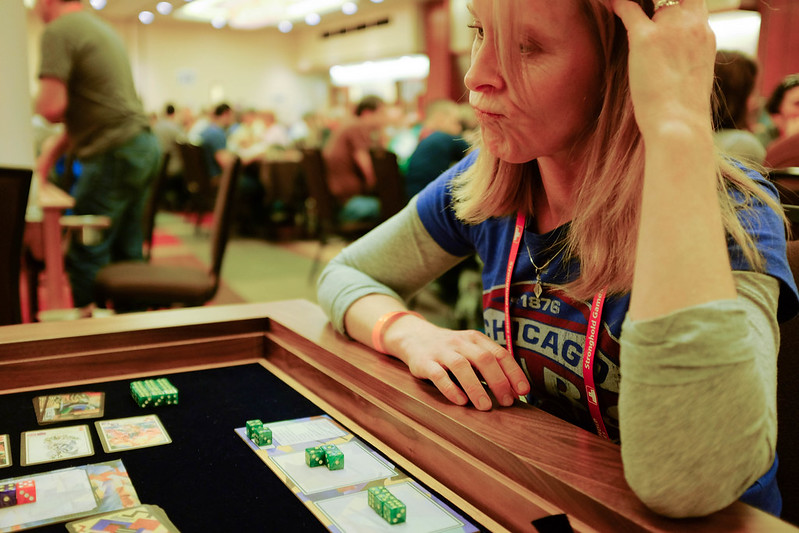 We dove right in and played CUBIST, an abstract game where you roll dice and make choices about model structures to build following certain rules. There are a number of constraints such as how you place the dice and how many models you can be working on at a time. Nice design with nice looking components. The structures look cool after you build them.

Next up was Trains: Rising Sun. I played the original Trains last year and enjoyed it enough to purchase (or have Julie buy it for a Christmas present) but it just isn't seeing the table at home. This felt very similar to the original but I think there is more map variety plus perhaps a different set of cards. Even though I don't think I'll pick it up, it is a quality game but in a crowded category of deck building games.

We finished our game playing on Thursday with the new light card game Red7. This is in the "quick playing game where you might get kicked out of a hand any second" category (like Love Letter) and was quite fun. The different colors define different rules for what sort of tableau is stronger and I'm sure I didn't come close to figuring out any sort of strategy. Jim crushed us. 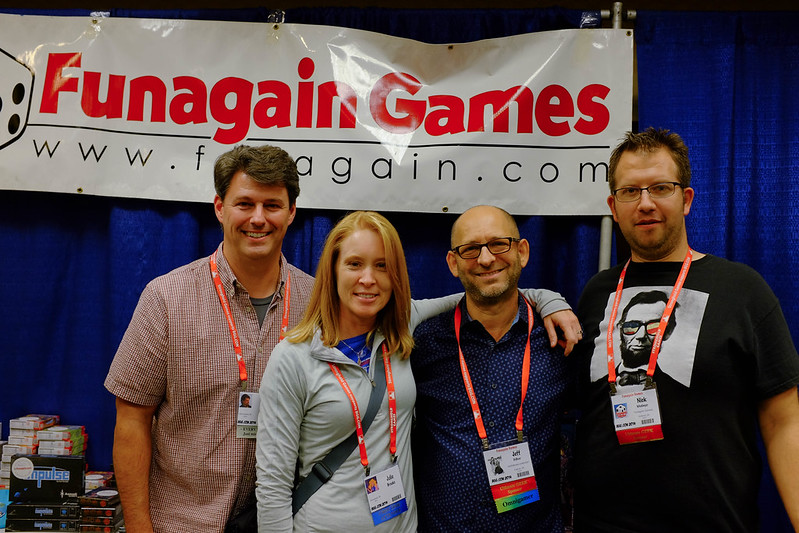 We stopped by the vendor area to say high to our friends from down south in Oregon, Jeff and Nick from Funagain.

On Friday we started with one of my old backlog games from previous conventions, Village. I was worried that this might feel just like most other Euro worker placement games I've been playing for the past 9 years, and my fears were confirmed. Not that I didn't enjoy it, but it felt very much like Pillars of the Earth combined with Stone Age to me.

Even though last year I said I probably wouldn't pick up Nations, the card civilization game, I did and played it a few times this year. Really enjoy it and it is a keeper -- in fact, I'm giving away my original copy of Through the Ages to Jacob to take back to college. The new light variant Nations: The Dice Game was just released and, as far as I know, isn't likely to be available until late Q1 2015. That's a shame because I really enjoyed this game. It has all of the quickness of its main competitor Roll Through the Ages, but I think it will have more variability and replayability. This is because there will always be a random set of cards available each age, plus random events and wars (just like the parent game). 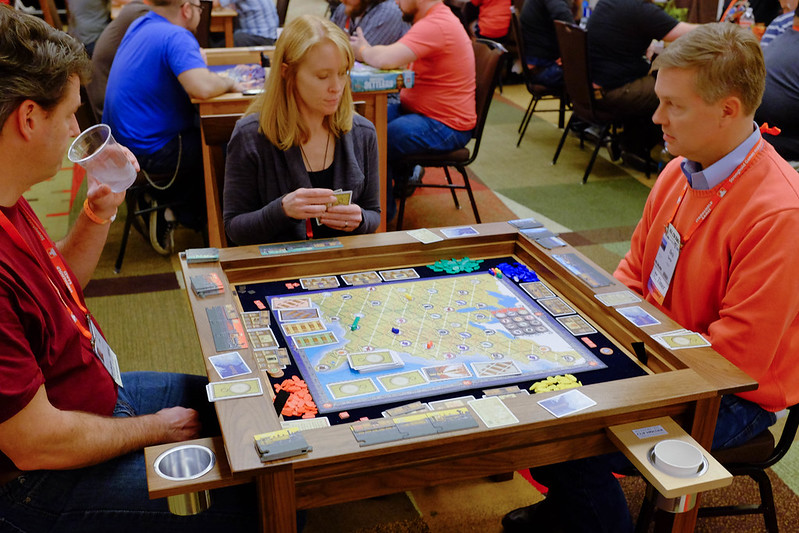 One of the big highlights for me was playing the new train / logistics game Spike. The game itself was fun -- very comparable to Ticket to Ride in that you collect cards for building routes and have bonuses for completing secret connections. Most of the points in the game will be earned however from delivering commodities to high valued destinations. The game has a brutal count-down clock with a variable end that has just the right amount of tension - can I make one more delivery or should I race to get this good off my train? Really looking forward to playing this again. What made the game even more enjoyable was our fourth -- playing companion Chris Carter. Sometimes you manage to meet really interesting people that you can learn from and enjoy chatting with, and this was one of those times.

Knowing that we would move into a heavier game later in the evening, we stuck in a couple of lighter card games. Julie and I first taught Jim how to play Love Letter, probably our favorite card game from the past year. I think we've purchased at least 5 additional copies as gifts. This should be in everyone's collection as you can teach it by playing and can fit into a quick 10 minute session. We also played the classic rummy game Wyatt Earp one of my favorites from the Mystery Rummy genre but one that I always seem to find a way to screw up the rules. 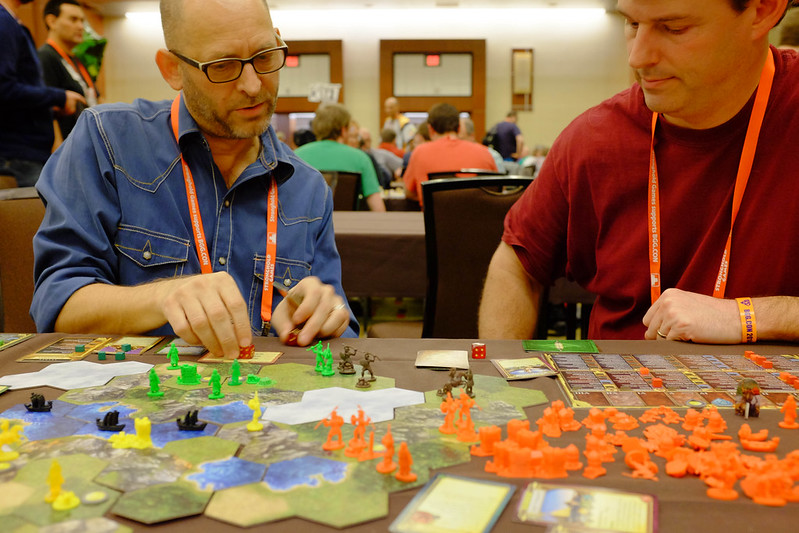 Saturday was a day to knock three games off my "want to play" list. We started with King of Tokyo, a game I had heard so much about but never played. It didn't disappoint and is great for some light-hearted gang-up-on-the-leader action. The only question now is whether to pick this game up or the newer King of New York.

The big dud of the convention was Escape: Zombie City. This is the real-time, high pressure successor to Escape: Curse of the Temple Players roll a bunch of dice rapidly trying to get combinations to allow movement to different parts of the city to prepare for the zombie invasion. Now this wasn't the best environment to play in (we couldn't use the soundtrack as the main hall was too loud), but even with a timer the game seemed far too difficult. None of us were interested in practicing to improve our chances next time around. 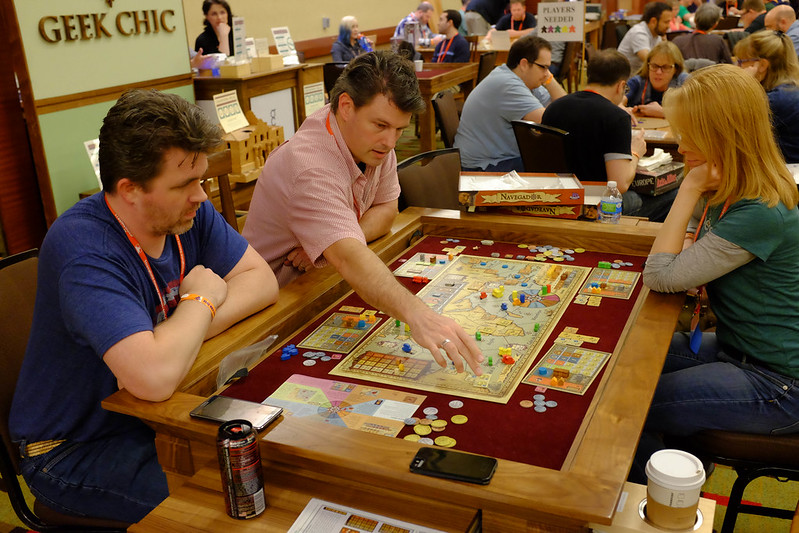 I love my rondel games and have had Navegador on the want-to-play list for a while. Julie was a bit surprised (pissed?) that I conned her into playing this longish game but hey, we got to play on one of the awesome Geek Chic tables and I think she was OK with it. I can see why some people think this is a bland Mac Gerdts game but it hit a nice spot for me. Not too much tension or angst and I felt there was plenty of freedom for folks to pursue their own path to victory.

We played the small box Gem Rush game about dwarves running around mines gathering gems. Nothing too exciting here - many other games like it and not worth getting.

Most years at BGG Jim and I play The Pillars of the Earth with the expansion and I wanted Julie to try it with us. I just traded for a copy as I think this game deserves a permanent spot in my collection. It hits a nice spot for me in the worker placement realm, partly because of theme, partly because of the graphical design, and partly because the tight arc in the game with its six turn limit. 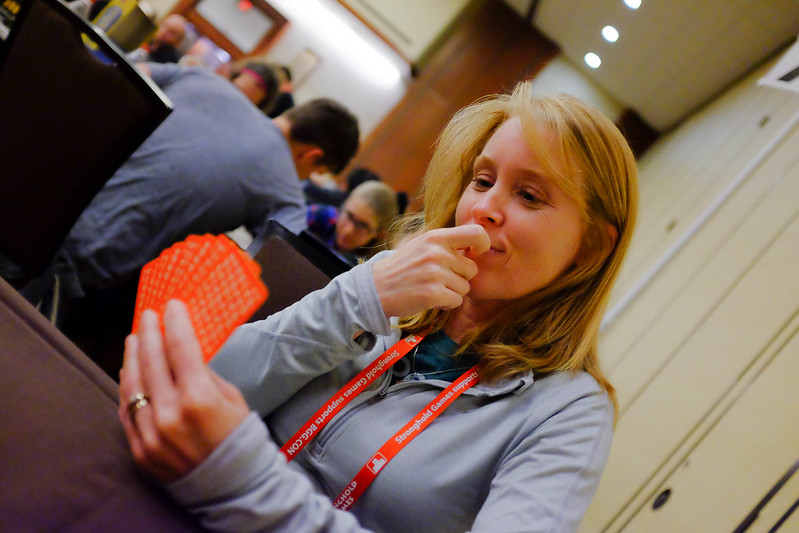 We played Tichu with Hamzy! I think Jim and I partnered against Julie and Mark. Mark is an old pro and plays in the Tichu tournament every year so that automatically made him the expert. We tried to learn from him but probably failed.

We just had a short morning on Sunday given time for packing and checkout, and we only managed to get in a play of the new Power Grid Deluxe. This is basically the same game as the original Power Grid with a nicer (maybe) presentation, different names and bits for some of the power commodities, and some differences in how the power plants come out and leave the board. Still felt like the same game to me which is just fine -- Power Grid is an all time favorite for me.

So that's a wrap. If you've hung around this far, you might be wondering what games I might pick up. Well, I'm selling off a ton of games this December and not eager to replace the shelf space. I think I'll get a King of... game, the Clash of Cultures Civilization expansion, and the Nations Dice Game. Maybe Spike but I'd like to try it again.

On a final note, I'm not sure I'll return to BGG.CON again. It is losing some of its luster, and Jim and I were wondering if we should just head to Florida next year and rent a house. With our own spouses and maybe part of our families there, plus maybe one other couple, we could probably have even more fun.