Friday started with a mini photography meetup with Mark Hamzy, Jeff Jones, and me. We enjoyed chatting about equipment, lenses, and Sony vs Canon. We also decided to jump into a game together and the result was... Supernova! 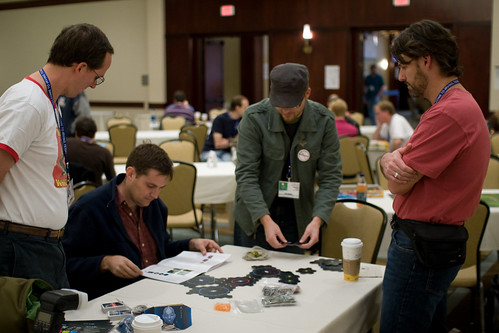 Supernova is a multi-player space conquest game that includes a bit of exploration and plenty of conflict. We were very lucky to have the designer Oliver Harrison there to teach us the game - very nice and helpful chap. Unfortunately Jim and I had the same impression of the game - too much downtime, it seems to favor attacking the weaker players, and likely unbalanced with some runaway leader issues. In this general category of games, we are both much more fond of Nexus Ops.

Jeff was eager to try After the Flood, and Jim and I were eager to apply all of the lessons we learned from our first go. This game had a very different pace as we often found ourselves stalling and seeing what the other players does, especially once our armies began marching. It was commonplace to use our workers as extra payment after a player had passed to extend our turns. 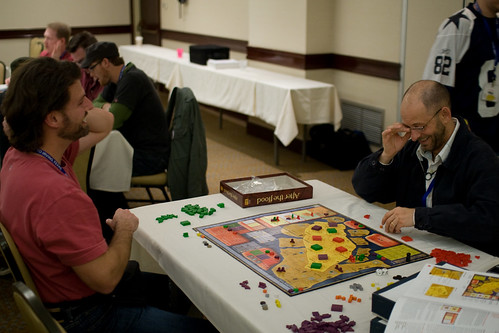 I was behind the entire game but had a nice slingshot victory at the end. I think all three of us think very highly of this game.

Jim had been lugging around the copy of Batavia that he had checked out from the library. This is a re-theme of Moderne Zeiten, a game neither Jim nor I had played so it was all new to us. 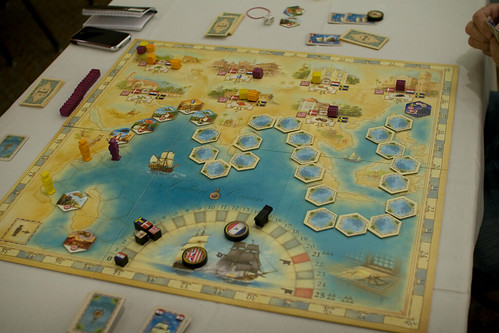 Again, Queen games is setting the bar on production quality. This is a beautiful game with a well illustrated board and high quality bits. The game was good - set collection to achieve majorities in certain goods with an interesting pirate mechanic. 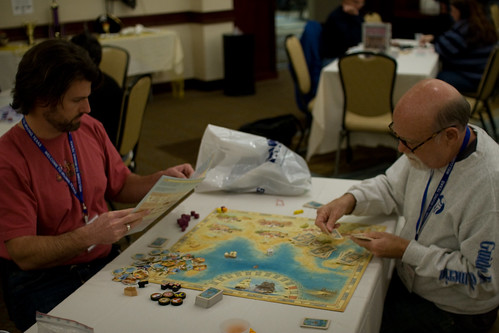 Batavia is on my wishlist - this is a good lighter-weight family game worth checking out.

Jim and I ended the day with a game of Canal Mania with Nathan Morse. Canal Mania is a game I will always play (especially when played correctly - last year at the beach we played a game where we were only bringing out a single good at a time instead of two!). Nathan played a strong game and edged us out, though Jim and I both closed the gap considerably during the final goods runoff. 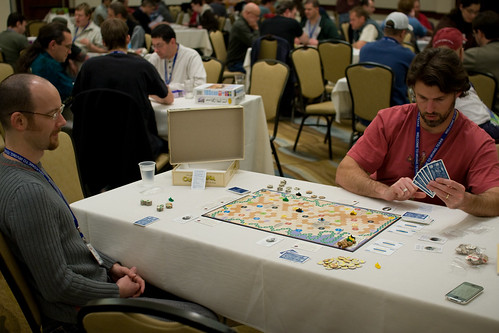