This will be my final report on BGG.CON.

We started the morning with a game of Alhambra down in the plaza courtyard (apropos, yes?). This was a six-player match with KC, Rita, Jim, Jill, and Yehuda. Sadly, I left my CF card in the laptop and didn't get any snapshots. This game is a fun pastime but I'm still mostly convinced it is a luckfest. I specialized in just a few colors and did fairly well, but couldn't manage to build a decent wall. Rita came out ahead by a single point over me for the victory.

KC took another stab at Yehuda's prototype, which was nice as he was able to get some rules clarifications. We'll be giving this one another player over the next few weeks to make sure we give it a fair evaluation. 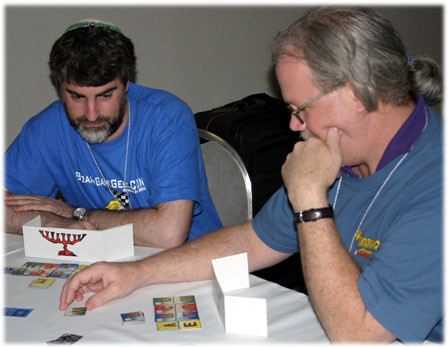 Mark Johnson and I were finally able to hook up for our pre-arranged playing of Verräter. Mark did an all-about podcast on this game a while back and it sparked my interest enough to pick up a copy at Essen. The rules aren't trivial for this game so I figured this would be a good chance to learn it from an expert. 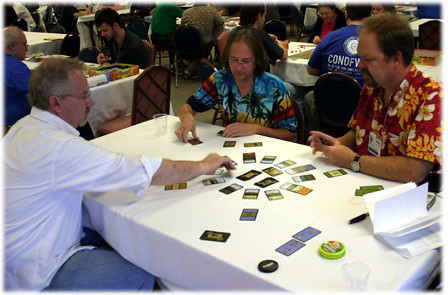 The game didn't disappoint - very deep for a seemingly light cardgame. I can see now how this game has likely influenced a few others (Puerto Rico and Citadels come to mind). I did horribly but had fun and look forward to trying it with my group.

As the convention started winding down, Ed and Susan wandered over to our booth and I talked them into trying Northwest Trek, one of KC's prototypes. This is a very light game that allows for conversation so it was nice to just relax and chat with them. It is a shame we live so far apart because I think our families have a lot in common and that our kids would hit it off. Maybe we'll see them at Gulf Games in the future… 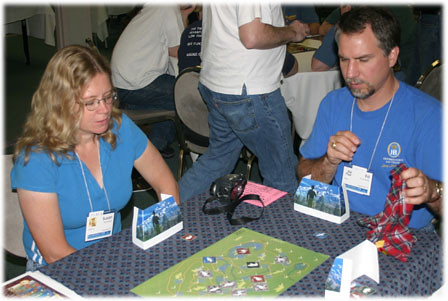 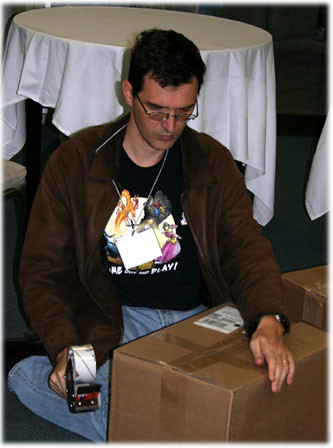 Our flight wasn't until 7:30pm, so we hung out in the plaza with Kevin Nunn to try out another of his prototypes. This one is a deeper boardgame that has some real promise and we'll be taking a closer look at it over the next few weeks. 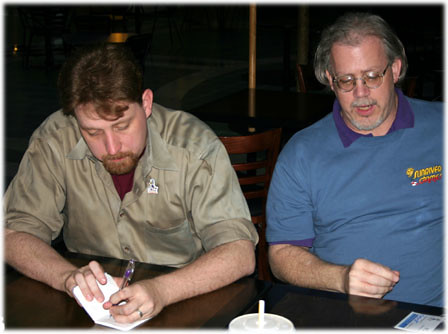 BGG.CON is a great convention and I think it will get better (and bigger) in the coming years. The community is so self-selecting that I suspect it has the feel of some of the more prominent exclusive invitations without being, well exclusive. Great job Derk and Aldie and I hope you outdo yourselves next year. We plan on returning.