Note: For those of you that have been following the Flickr photo set for BGG.CON, please note that my camera's date/time was off by about 12 hours (forward), so some of the dates taken are wrong on the photos. Sorry. The camera is fixed so things should be fine going forward.

I let KC and Rita sleep in on Saturday morning and took over booth duties during and after the flea market. My reaction to the flea market was "eh" but several folks found some good deals. I know Jim picked up a much wanted copy of Battle Cry that should be good fun with his kids.

Around 11am I taught and played in one of my few scheduled events of the weekend - Antike. Joining me were sedgtroll, Edbryan, JosephDowell, and sbabcock. 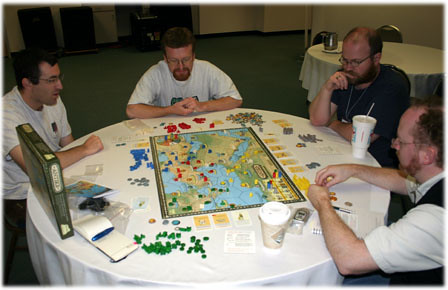 Antike is a relatively light-weight euro-style conquest game. It does involve conflict between nations (I don't think you can win this game without attacking) so is technically a wargame, though it clearly isn't a simulation. Players take on the role of civilizations. There are multiple paths to victory as players compete to earn historical figure cards for accomplishments like having 5 (or 10, or 15) cities, destroying other players' temples, being the first to acquire a certain kind of know-how, or for building temples.

On a player's turn, a player chooses between 1 of 3 types of actions - produce, build, or maneuver. The way actions are chosen is, to my knowledge, a unique mechanic in Antike. There is a wheel on the board where each player places a colored marker indicating their chosen action. At the start of the game, each player chooses any of the available actions. Thereafter, you must advance your marker around the wheel clockwise from 1 to 8 spaces to choose your next action. Advancing 1-3 spaces costs nothing; each space beyond that costs 1 resource per space. This is significant because the related production / consumption activities are always 4 spaces away. So if you want to produce marble one turn, then build a temple (which requires marble) the next turn, you'll have to pay an extra resource to choose that action. Same thing if you want to maneuver two turns in a row. This encourages players to pace themselves and work on a diverse set of activities, such as producing gold one turn, expanding their armies the next turn, then increasing know-how on the third (which uses the gold produced two turns ago). You can see the rondell in the upper left corner of the image: 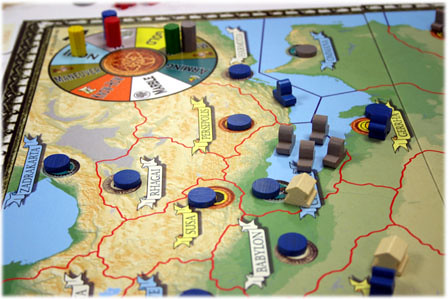 What I love about this game is that there's very little downtime for players (though it does increase throughout the game) and it plays easily in under two hours. The game board comes with two distinct maps, with the player aids on one side in English and the other side in German. This gives owners of the game two different maps to play, which is a nice bonus. Definitely consider Antike if you are looking for a short duration, low downtime conquest game.

I talked Eric Hautemont into trying out Havoc mid day on Saturday. I think he enjoyed it quite a bit and he did buy a copy. Thanks to Jill for serving as our demo monkey on Saturday.

KC spent some more time with the Beatnik Turtle folks and taught them Basecamp Delta, one of his prototypes that he recently submitted for the Hippodice competition. 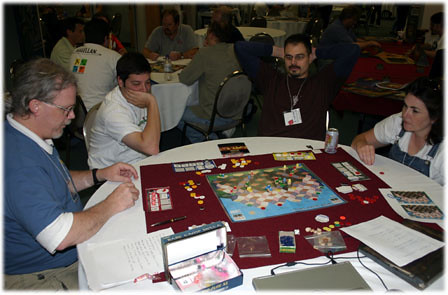 More on this later, but I did finally get some time on Sunday to play games with Ed and Susan as well as Mark Johnson. I managed to get a snapshot of Ed, Greg Wilzbach, and Mark Johnson playing the yet-to-be-released Mission: Planète Rouge with Asmodée Editions. 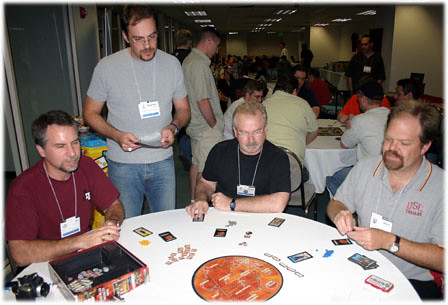 On Saturday night they held the Texas Hold 'Em tournament. I got taken out fairly early while trying to stupidly complete a flush draw. Rita did very well and ended up taking the seat I vacated shortly after I "went home". 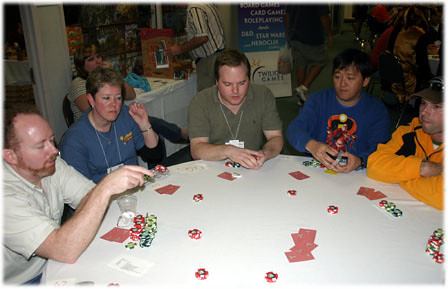 I was eager to get some rest Saturday night so I opted out of late-night gaming. I did help Jim, Jill, KC, and Rita get going in their Hoity Toity game, teaching them the rules and explaining in depth why I detest the game. I think they had the same impression, stopping the game 2 or 3 turns into it. 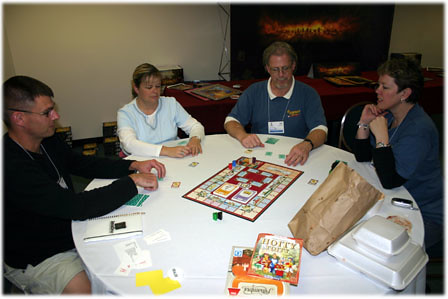