One of my only purchases at BGG.CON was the new Eagle Games release Railroad Tycoon. I held off on purchasing Age of Steam once I knew this was coming out, as I believed it would be a better fit for my family given the production style of Eagle Games. Jacob and I played a prototype demo at GenCon last summer.

Friday was a holiday for all of us, so we broke out the game for a 3-player session at home. The game was easy to setup and teach and we were off and running within 20 minutes. I was especially pleased with how easy it was for Matthew to grasp the mechanics of the game.

We started off with a battle over the northeastern links, and I managed to get the best return on investment there and jumped into the lead. Getting hotels in Boston and Baltimore didn't hurt. 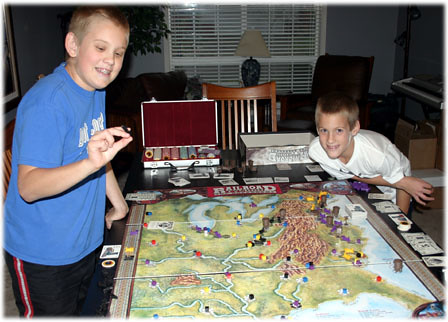 Jacob was the first to try a new area, building around Louisville and starting to accumulate some nice links there. We took notice of the number of empty cities and I realized we were close to finishing the game after only an hour of play. This was not good for me as I was behind Matthew in total number of links, and I knew that I needed my Tycoon bonus to beat Jacob. Unfortunately Matthew's bonus entailed building links out of Chicago so he wasn't slowing down his track construction any time soon, making it impossible for me to catch up. I tried to bluff Jacob out of ending the game quickly, but he wisely ignored me and forced the ending, pulling out a four point victory. Very satisfying game for all of us, and I was especially impressed with the short 75 minute playing time for our first game.

The three of us along with Ken and Brandon trekked over to Tim and Carrie's place for some Saturday evening gaming. I brought several of my new games, including RR Tycoon, Caylus, Antike, and Wits and Wagers (Eagle Games was kind enough to send me a review copy of the game).

I set up Ken, Brandon, Jacob, Tim and Doug for Railroad Tycoon. Again, the game was easy to teach and they were off and running without much more assistance from me. Tim pulled out a narrow victory over Ken, and impressions all around the table were positive. 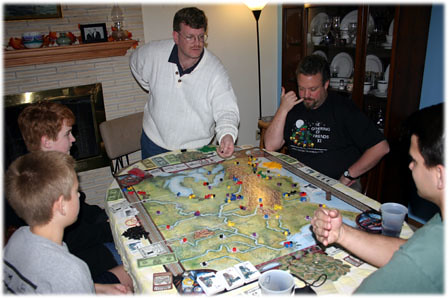 I give Eagle Games a B+ on the bits. The empty city markers are a bit gratuitous, and one of them doesn't even fit in a hex. 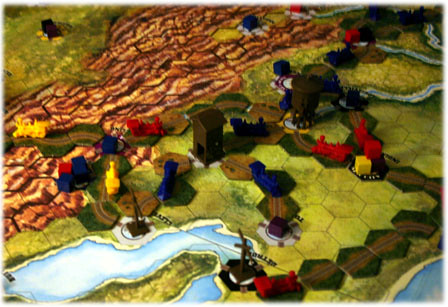 Meanwhile, I taught Doug, Matthew, and Carrie how to play Caylus. Caylus takes a while to teach - plan on 20 minutes or so, but it clicks quickly once you start playing. I warned everyone that they would likely make a sequencing error at some point in the game (e.g., not having the right resources at the right time when the buildings activate), but of course everyone did fine in this area but me. 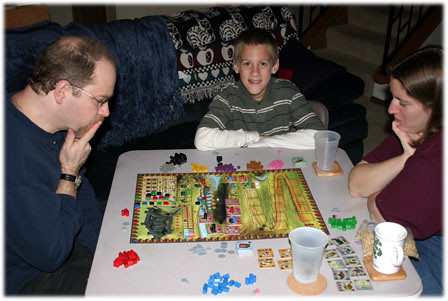 Matthew focused on generating lots of cash early in the game. Eventually I reminded him that he'll need to generate prestige at some point, so he switched gears to castle building and did quite well. I pulled out a narrow victory over Matthew, with Doug and Carrie a short distance back from him. Caylus is the kind of game where you need at least one play to start formulating any sort of strategy, so it wasn't surprising that I won. Most surprising was how well Matthew did.

We wrapped up the evening with a game of Wits and Wagers. This is a trivia game where all of the answers are numeric, positive numbers. A question is read and each player writes on a little dry erase board an answer (e.g., how tall in feet is the Empire State Building?); players have 30 seconds to answer. The answers are arranged smallest to largest on the betting mat. Players then have the opportunity (again, for 30 seconds) to place up to 2 bets on the answers. The bets that are further away from the median answer will have a bigger payoff. 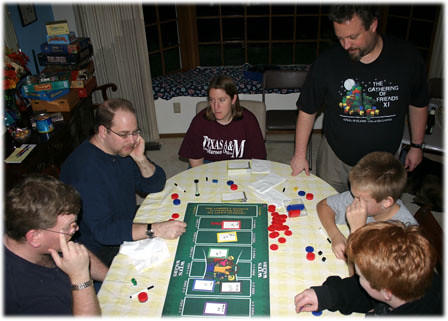 This is a very light trivia game, but is reasonably forgiving to those that don't know trivia. There are opportunities to guess and get big payoffs, but in the end I think the more you know the better you'll do. Tim finished in first place with Matthew and I (team) a close second. This will get some more play over Thanksgiving weekend and I'll post more thoughts then.