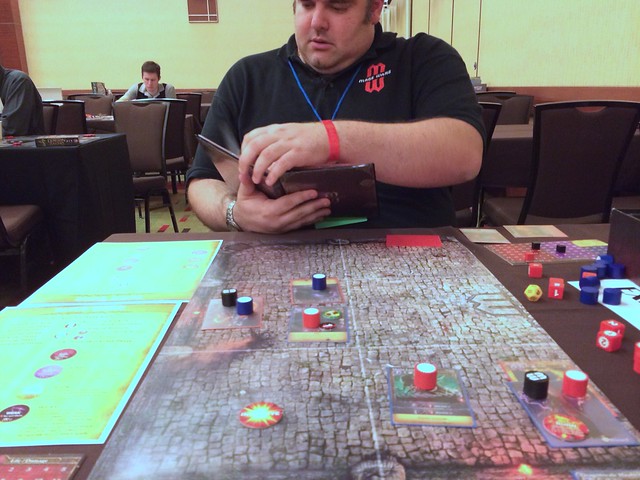 Day 1 at BGG.CON is over for me. No promises that I'll be be able to keep up with daily posting but here's a quick recap.

My first stop was the dealer room and a change to run into other people from Oregon that I haven't seen in a year `or two (Jeff D, Jennifer G, Steve E). The nice gentleman at the Mage Wars booth gave me a brief rundown of the game and let me know they were running demos in the Hot Games area so that's where I headed.

Mage Wars is a two player tactical "miniatures" game played with cards instead of figures. It uses a simple area movement system so there's no rulers or measuring involved. If you've played Summoner Wars you'll find some similarities. What sets this game apart is the innovative use of the cards. There's no deck to draw from; instead, players each build a spell book ahead of time using a point budget and have all cards available to them throughout the game. In my demo game I chose the Wizard and the deck was pre-built. I played against the Warlock; also included in the base game is the Beastmaster and Priestess. The game was easy to learn but gushing with theme and, I suspect, replayability. The game is currently ranked in the top 50 overall on BGG and seems to be holding up well. Not sure I will buy it as I've got enough games in by his genre but I would love to explore it some more. 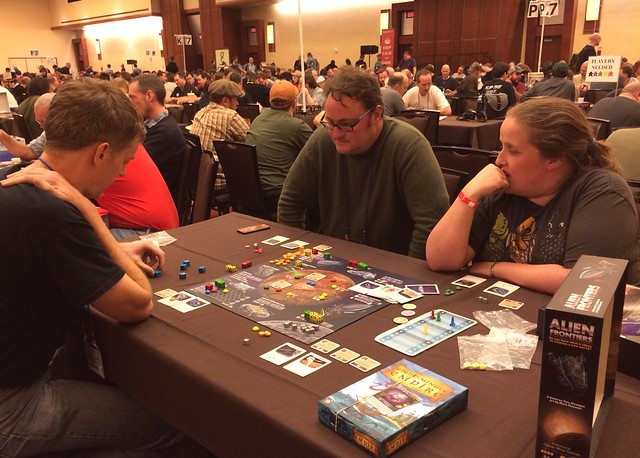 I wandered around a bit and was beckoned to come play Alien Frontiers, a game I've played just once exactly 2 years ago at BGG.CON. I enjoyed it then and after playing again I can appreciate how good this game is. The dice rolling fun isn't hampered by poor rolls because there always seems to be something worthwhile to do. I'd gladly play this again. 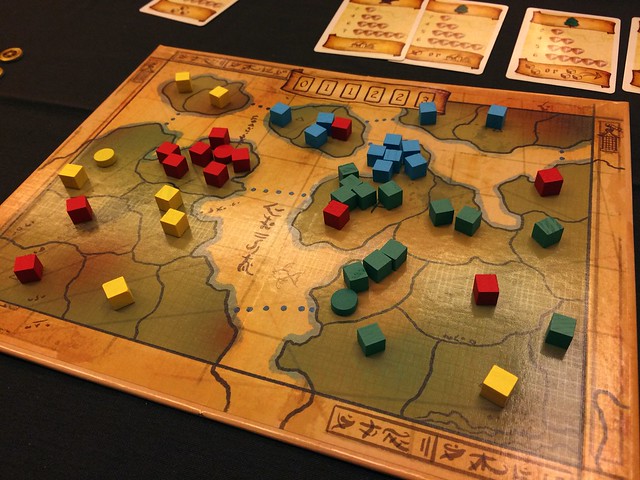 I had checked out Eight-Minute Empire from the library hoping to talk someone into playing it with me. I've seen good reviews of this game in Counter Magazine and elsewhere and the idea of a quick playing empire and exploration game is intriguing. The group I played Alien Frontiers with was happy to stick around and try it out.

This is a very solid game, and we played in about 17 minutes including some rule checking along the way. Players start with a small army of cubes all in the same location as the other players and take turns buying action cards that serve two purposes:

Points are scored by having majorities in regions on the map, having majorities in continents, and by collecting sets of commodities. There is minimal direct conflict between players (no battles and very few of the action cards that destroy cubes) but plenty of interaction as you try to spread out and control regions. This would be a great lunch-time game. They have Eight-Minute Empire: Legends in the library so I'll try to play that before the weekend is over. 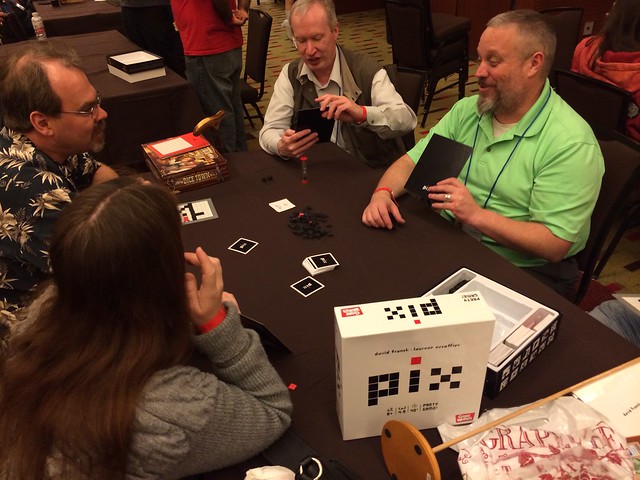 My friend Tim is here for the weekend (I first met him in Dallas at his gaming group about 9 years ago, then he moved to Portland, then moved back to Dallas) and I caught him playing an interesting looking Pictionary-style game called PIX. 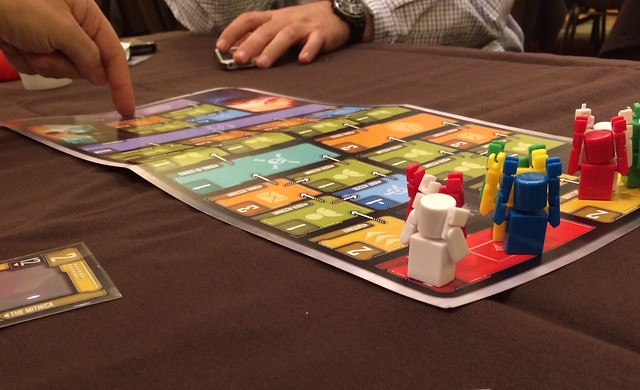 My final play of the night was a prototype trick-taking game from a Finnish designer called Blackhat. It combines card game mechanics with a board and still needs some work. I didn't exactly dislike it and there is a decent core to the game that has some promise. We played a rule or two incorrectly that might have made it better.