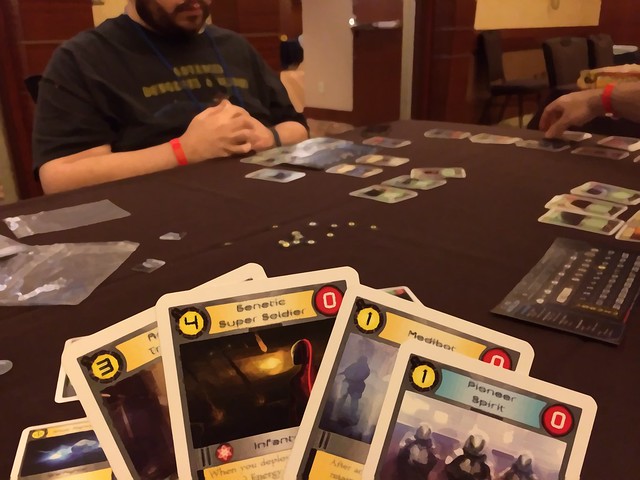 Day 2 started off on a very nice note as I joined a group of two with a willing teacher to play Core Worlds, a game that was on my list to play last year but never got played. Core Worlds is a deck building game (like Dominion, Thunderstone, etc) with similarities to the modern classic game Race for the Galaxy. Players start with identical home planets and decks (we didn't play with the optional initial drafting rules which would have allowed us to customize our starting decks a bit) and can take actions to draft new cards, deploy forces from their hands, and conquer new planets. These all cost action points and energy which are significantly constrained at the start of the game. As you conquer new planets you will likely add to your energy production.

The cards you draft help you improve your military forces and add new tactics (special events or bonuses) to help you conquer the every escalating spectrum of planets that will come into play. Players are rewarded by some specialization as the final planets in the game will give bonuses based on the types of cards that are in the deck at the end. There's a limited amount of deck tuning and pruning throughout the game as players can bury the basic military units underneath conquered planets if they participated in the battle.

Very good game and one I will consider getting. I may need to choose between this and the soon-to-be-rebooted Race for the Galaxy. 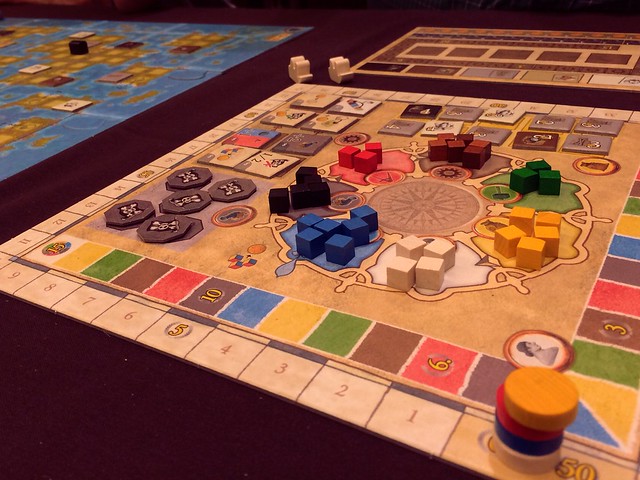 My next game was one of the new hot games released at Essen: Amerigo by Stefan Feld. Amerigo borrows the cube tower from one of my all-time favorite games Wallenstein but with a completely different application: the colored cubes that tumble out of the tower determine the actions that are available to all of the players in a given round.

The theme of the game is exploration and colonization in the Americas during the age of discovery. Players move around ships that can drop off trading posts on islands, then buy and develop structures on those islands with the hope of fully populating them and claiming victory points. Not surprisingly there are many different ways to score points in the game, though we found that if you don't stay on top of the rhythm of buying and placing structures (and keeping enough beachheads on the islands to give you room to expand) you probably won't stay in the running.

I really wanted to like the game but I think it is too long for my taste. I don't mind long games, but they need to have an arc without too much repetition and I think the last 3rd of the game dragged on. 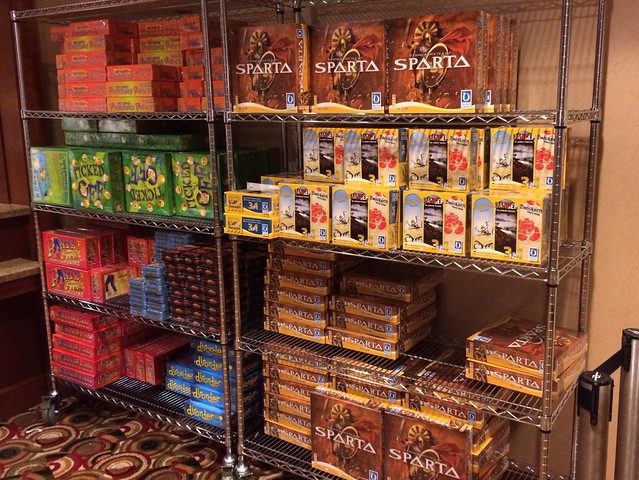 A quick diversion to show off the "prize table" for BGG.CON attendees. You get to choose one game from each of the two column racks. These are definitely overstock type games but sometimes you can find a nice pick. I chose Disorder and Venture Forth. 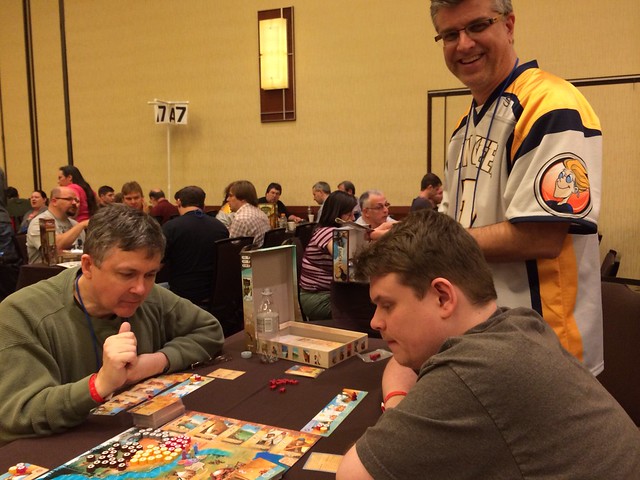 The third in my set of four biggish new games was Lewis and Clark, a game that should be right up my alley living in the Pacific Northwest and all. Game explainer extraordinaire Rick Thornquist taught us in a very efficient way and we were off and running quickly. 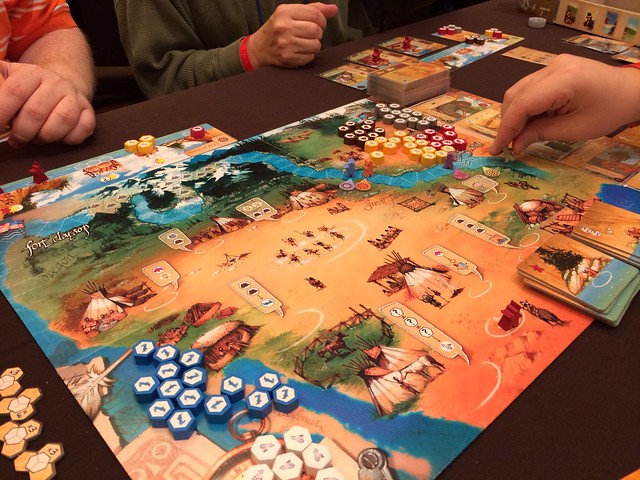 The game looks like a worker placement game and has elements of that, but is more of a hand management game in my opinion. I had a hard time grasping the various interlocking concepts and made a few foolish plays. It can be pretty punishing early on if you don't manage things well and two of us fell behind pretty early. The game is a race to Ft Clatsop at the mouth of the Columbia River and it takes a lot of planning and proper execution to get the right resources to travel effectively while lightening your load for efficient resting.

This is not a light Euro like Stone Age. I would put it right up there with Agricola and similar heavy Euro games. I would play again but am not likely to purchase. 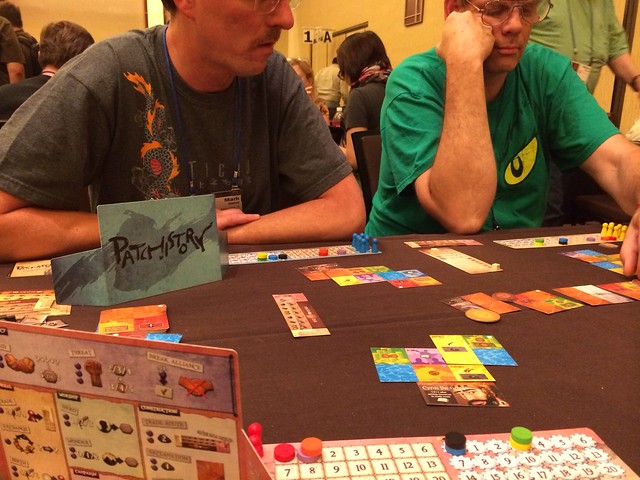 The disappointment of the night was Patchistory. I'll keep my comments short because I don't want to be overly critical. Suffice it to say that this game could have used another year of development, blind play testing, and rules editing. Unless you are ready for 3-4 hours of reading, errata checking, and online clarification I wouldn't even bother trying to play this game out of the box. It took us about 4 hours total to learn and just play through 2 of the 3 ages and things still didn't feel right rules-wise.

This is a shame as the core mechanic of acquiring tiles and layering them together to tailor your civilization is very solid. There's a good game inside here but it needs a good developer, streamlining, and a complete rewrite of the rules. 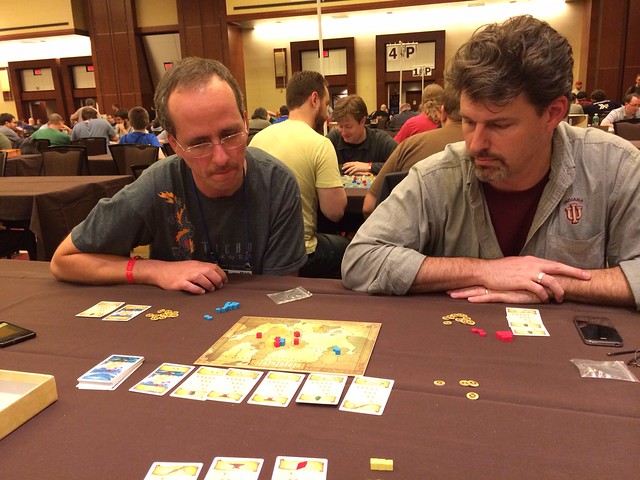 Jim Ginn finally arrived after delayed flights around 11:15pm. After a Laphroig toast in the bar we joined Mark Hamzy for another play of Eight-Minute Empire. This game is a keeper.