Hard to keep up on these reports with so little sleep. I'll try and catch up and give a brief report on how Friday went.

I finally got to play one of the bigger games on Friday, helping teach and lead a session of the new Splotter release Indonesia. Peter Drayton, his wife Julie DuBois, Todd Walker, and Jeff Wu joined me. 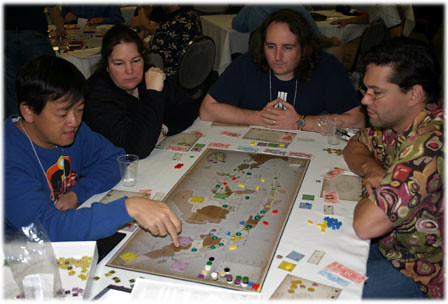 It took about an hour to teach everyone the game, and I'm certain we made a few mistakes in the early goings. Most notably, we let players build more than one city each in the first era - the rules are ambiguous in this area. There's a clarification on the geek that makes it clear that only once city per player will start each year. This is important because cities grow when they get fully supplied with goods, and more cities means more competition for goods which means slower city growth. I don't think it affected our enjoyment of the game.

This is an economic game where players operate companies trying to generate profits through the sale and shipping of different types of goods (rice, spice, rubber, oil, TV dinners) to cities. Mergers can be proposed allowing for consolidation of companies, with payoffs to the merged company owners. This results in cash distribution similar to Acquire, though there is a key difference: players don't get to cash out their companies at the end of the game, and the victory is determined by cash on hand. So most money will be gained through operating revenue.

The game could have been a lot more fiddly and less streamlined than it is - I suspect the designers spent a lot of time taking out unnecessary complexity. It took us 3-4 hours to play the game, but I suspect it can easily be played in 2-3 hours. It seems to be close to Caylus in length, maybe a tad longer. 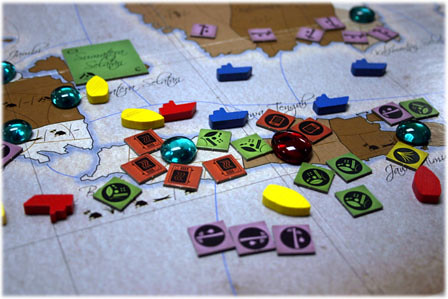 On Friday we started hanging out a lot with Jim Ginn and his wife Jill (I first met Jim and his three sons at GenCon, where they played with Jacob and Matthew). Their company has made the conference much more enjoyable (and it would have been a blast even without them). Also, on Friday evening we had the pleasure of hanging out and dining with the Beatnik Turtle dudes. Very nice folks and they are rightly Cub fans and not Sox fans. 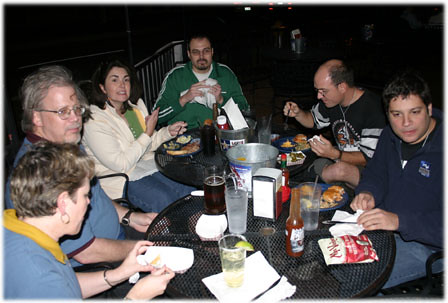 After dinner I watched and snapped some photos of Peter Sarrett's famous game show. Even as a software guy I was very impressed with the system he's put together for this game show. 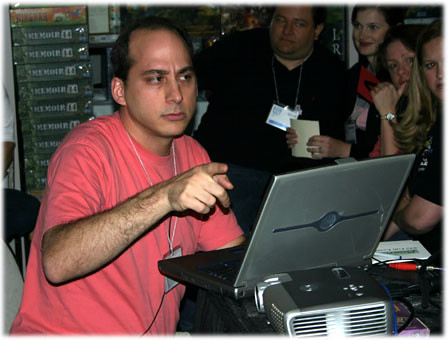 Attendees self organized into teams of four (Aldie and his team are below) to play through three rounds of challenges - mostly trivia combined with arrangement of visual clues. 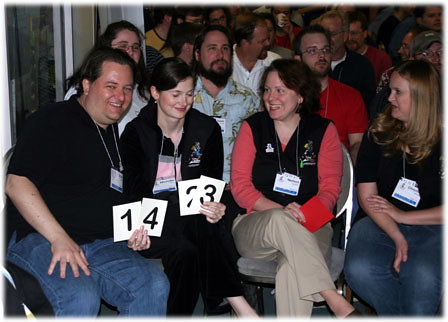 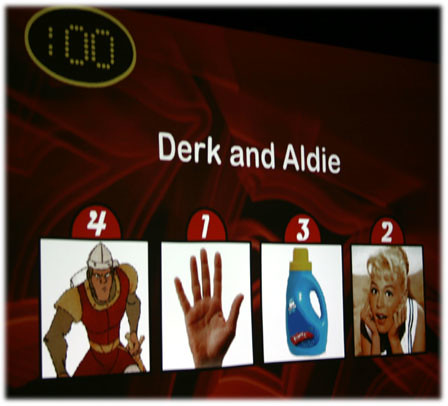 The four clues above where shown in a 2x2 grid, numbered 1-4. Players are required to organize the numbers in order to sound out the phrase (or clue indicated by a phrase). Teams are self policing and Peter quickly tallies who correctly finds each answer. I only stayed for about 20 minutes - the clues were pretty tough and a number of teams got frustrated early on and left. Very well run and organized, if a bit crowded.

The final game of the night was a game of Caylus that Jim, Jill, Rita, KC, and I started at about 12:30am (!). Sterling Babcock was desperate to play this game, so Jill very kindly stepped aside and let him join in. KC clearly learned from his mistakes in our first game, slingshotting to a huge lead at the end with a strong castle building strategy. I went for residence / prestige buildings and did well enough to finish second, but still well behind (at least 15-20 points) KC. I don't think I like the game as much with 4 (3 or 4 are preferred, haven't tried 2 yet), but it is still A-list for me right now. 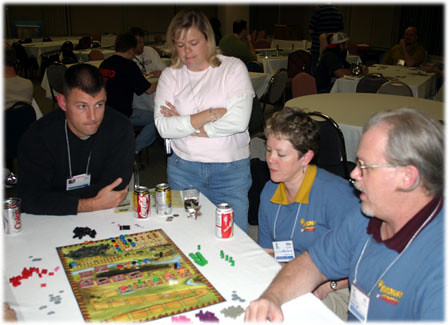 Got back to the hotel room at about 3am and had to be back on the floor by 9am. Ugh… at least I was able to let KC and Rita sleep in and get some well deserved rest. They've booked more time in the booth than I and they earned a break.