It's late but there's always time for a quick post with some photos and game comments. Probably more photos than comments today. Reminder: you can follow my photostream on Flickr to see photos throughout the day, plus extras that don't show up on the weblog.

After a quick workout and some breakfast in the morning, we headed over to the south tower, level 5, to check out the facilities. Derk and Aldie were actively engaged finalizing details, trying to find chairs, and handling general logistics concerns. I think they were most worried about getting chairs. 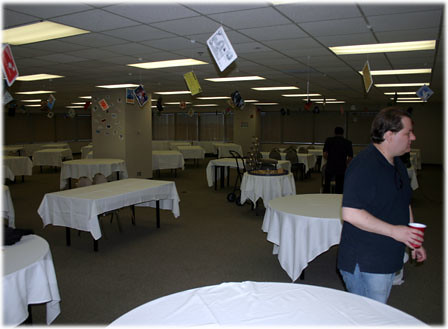 We setup our Havoc demonstration area in about an hour or less. KC and Rita did most of the work… in fact they probably did 90% of the work for the whole day. I'll make it up tomorrow. By about noon we were giving our first Havoc demos. 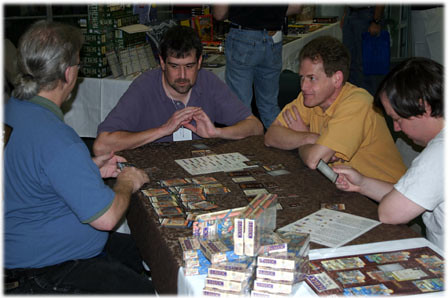 Yehuda arrived about this time as well and spent some time sorting out some game materials. 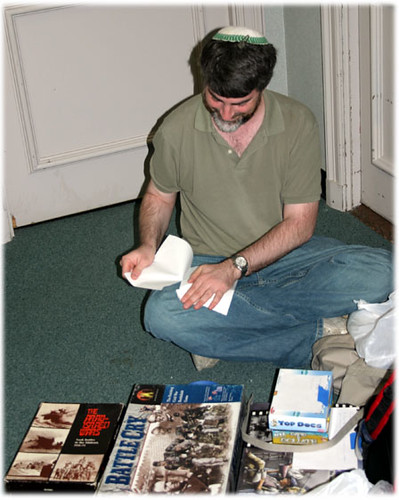 I bet Eagle Games, Z-Man Games, and Days of Wonder were all thrilled to be located close to the Sunriver Games booth - I'm sure the Havoc draw will bring a lot of traffic to their lesser known games. I told Eric and Mark (below) that they are welcome to try and sell me any of their games but that, unfortunately, I already own all of them so there's really no use. Eric decided I needed to buy a 2006 calendar. 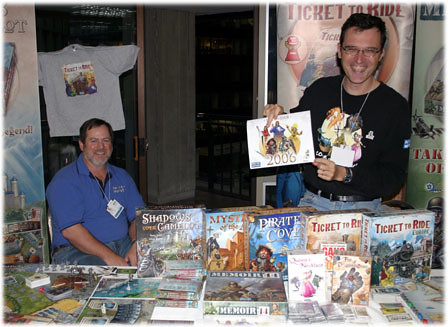 Derk and Aldie did an amazing thing - they setup three prize tables with an instant raffle upon badge pickup. I drew the lowest valued ticked (red) but picked up Plunder, a game I've been wanting to try for some time. AMAZING how much they can fit in that small box. 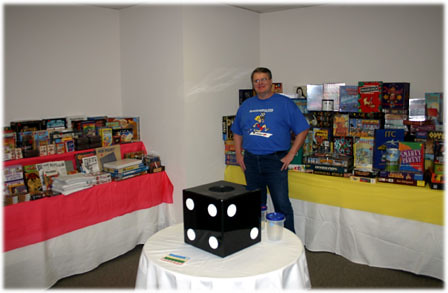 A bit after noon a couple (Numskull and BilboAtBagEnd) of gamers stopped by the Z-Man Games booth and asked to play their only copy of Siena. I overheard the request, asked if I could join in, and we headed over to the open gaming area. Gilby and EdBryan joined us so we were set with five players (gilby, edbryan, numskull, and bilbo in order left to right below). 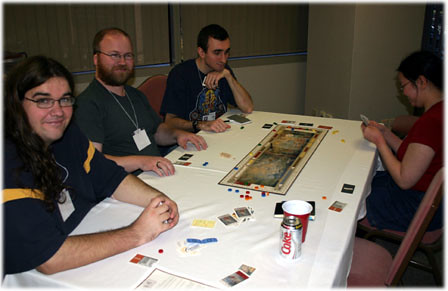 The games was incredibly difficult to read, learn, and teach on the spot. I wish I had read this before trying to digest the English rules. The game is good, maybe excellent, but unfortunately I ran out of time and had to bail out before ending. Players take on the role of peasants that move up to be merchants and finally bankers. There are some creative mechanics in the game, but I'm not sure how they all fit together. I didn't get to observe enough of the final banking phase to see how that played out. Oh, and there are prostitutes in the game. Seriously. And they entice your banker to join them in the inn. And you can distract them with girlfriends. This lead to some interesting color commentary during our play.

The game is well produced with some very nice artwork. I'll probably pick up a copy of the game once it ships. 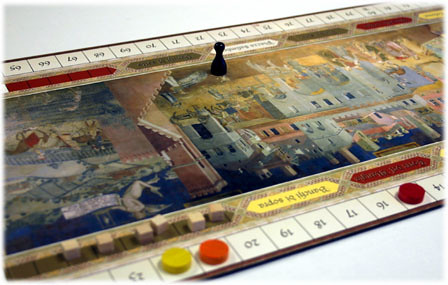 I then taught Antike to two groups, but did not play myself. I'll get a chance to play it on Saturday and will let you know what I think. General impression was that it is a solid conflict / empire game with very little player downtime.

After dinner at an Irish pub with Rita, Jeff DeBoer, and Baldboy_1, we returned to have Jeff teach KC, Rita, and me Lost Valley. This is an exploration game I picked up at Essen for a mere 10 euro based on a recommendation from Ben Corliss. I'm glad I did, because this is a great game. 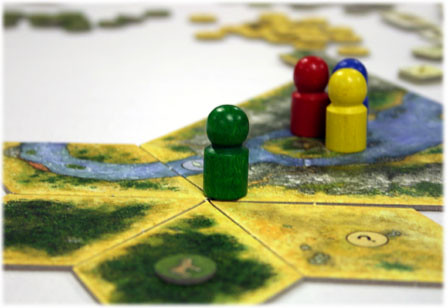 Players take on the role of explorers trying to find glory through gold panning and mining. There's an exploration / flip the tile element to the game, but the fun is in the resource management and dealing with other players' actions. KC played a superb game and wiped us clean, finishing with something like 28 points to my 15, with Rita and Jeff tied at 12. Wasn't even close, but it was still fun. 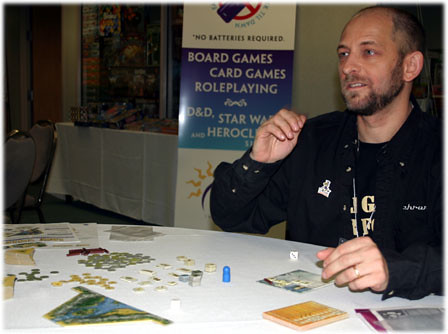 Tomorrow we'll sell some more Havoc and I hope to get in a playing of Indonesia. I also hope to pick up a copy of Railroad Tycoon - Eagle Games thinks they'll have stock by the morning. I just need to make sure we sell enough Havoc to make room for it in my bag!