Saturday was full of great gaming and even better Texas BBQ thanks to a trip to the Baby Back Shack courtesy of Tim and Carrie. The day did not start off to well, though, as Jim and I tried out the new Essen release Oregon and were disappointed. 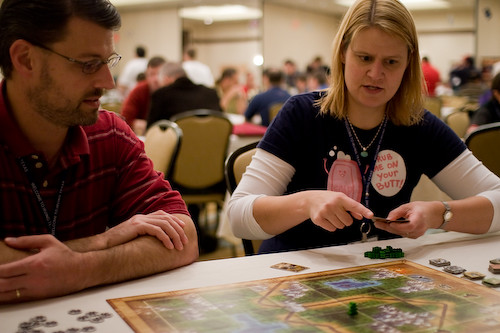 Given the name I was hoping for something thematic that might even be interesting to use in my school games class, but this is just the next game in a series of dry Euros with no connection between theme and mechanics. I can live with that - I like Knizia's Genesis quite a bit - when the mechanics are engaging and fun, but unfortunately that's not the case for Oregon. The mechanics work like this: 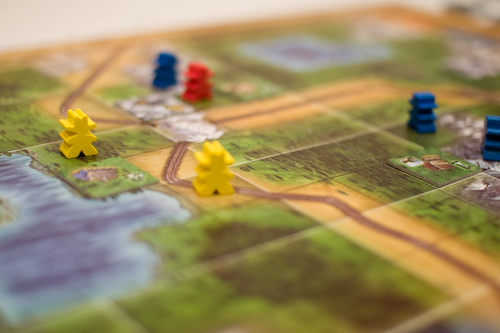 Repeat until one player runs out of meeples - that's the game. This sort of game just isn't my cup of tea any more, and I'm very happy I had a chance to play it before purchasing as I was getting close to purchasing it based on the title. 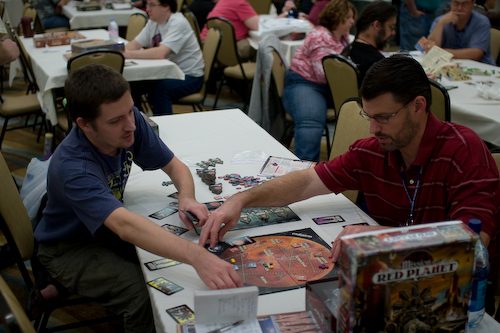 Fortunately our next game was much better. Two years ago at BGG.CON Asmodee was running pre-production demos of Mission: Red Planet but I missed out on trying it then and two years later I still hadn't played the game. Jim had checked this out of the library the night before so we sat down to teach ourselves and try it. Kris Wolff joined us and we played the game in 40 minutes and had a blast. I suspect it has already been characterized as a streamlined El Grande combined with Citadels, though it did feel a little less cut-throat than Citadels to me. I didn't do very well (Jim won) but could have won with a different hidden event card played in one region where I had a majority (monopoly) that drastically lowered my score. A game with this much action going on that can be played in 30 minutes is likely to become a purchase for me. I love the theme, but I do wish the components were higher quality.

I snuck into the admin area of the convention to dig through Greg Schloesser's bag of goodies from Essen and grabbed Cuba, a game clearly influenced by Puerto Rico but with enough differences to make it worth considering. Russell Moll joined Tim, Carrie, Jim, and I in a five player game that lasted about 1 hour 50 minutes. 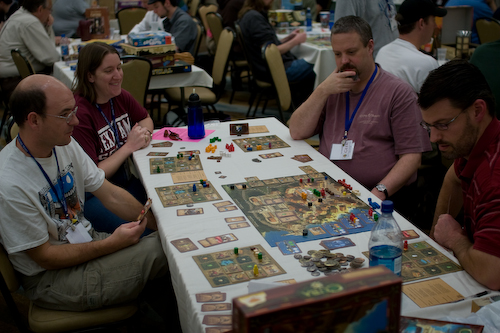 The economic system is Cuba will be familiar - a set of base resources and goods that can be turned into final products like Rum and Cigars, used to construct buildings, or sold in local or overseas markets for money and victory points. This aspect of the game is very similar to Puerto Rico, but where it differs is in the role selection process. Each player has five role cards and in a given turn will use four of them to move their economy along, selecting one at a time as you go around the all players four times. The player mat for each player also has some interesting characteristics in how you can manage the production of resources, and as you construct buildings you take away resource production slots. 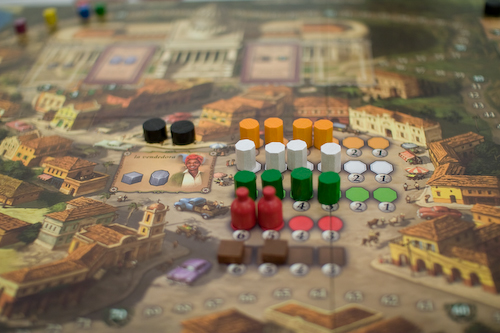 Finally, there's a game-wide context that changes throughout play as players vote on various bills to pass into laws. These effect the game by imposing taxes and tariffs while giving some rewards based on the current state of a player's economy. The voting mechanism is interesting and these bills will likely add to replayability of the game.

The quality of the components is outstanding - great colors and artwork and lots of high quality wooden bits (my favorites are the rum bottles). You probably have a good idea by now if you'll like this game. I do, and I will probably purchase this one when I can get my hands on the English version. 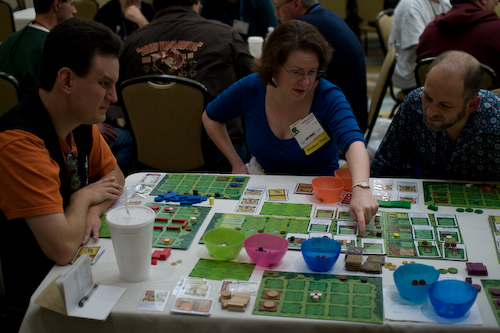 After our BBQ run and a 10 minute nap, Jim held a spot for me in a forming Agricola game with Jeff Deboer and Melissa and Will Demorris. If you listened to some people at BGG.CON, this is the NEXT BIG THING in gaming that will take the world by storm over the next year. So many people were playing it and discussing it that I felt like I had a pretty decent idea of what to expect going into the game. Agricola (I think you aren't supposed to pronounce that so it rhymes with Diet Cola, don't ask me how you do pronounce it though) has a feel like Roads and Boats in that you start with close to nothing but a set of initial conditions (a two-room house and a husband/wife) to allow you to bootstrap your engine and build a mini economy - in this case a prosperous farm. 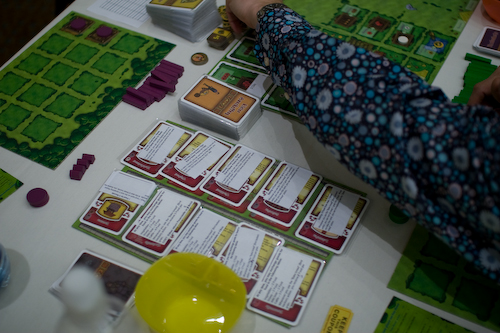 The game works and is quite good. I had only two complaints, and both were based on the fact that we were playing a pasted up version of the German edition of the game. The iconography was a challenge at times (what's the symbol for stone?) and the action selection board had parts in German that I had to just remember as the game went on. What may keep this game evergreen is the cards - I think there are over 300 of them that describe occupations and innovations relevant to period farming. The game oozes theme and the mechanics are solid, though play does feel mostly solitaire with a small amount of interaction and competition in the middle board as players choose actions.

I'm tempted to pre-order this with Z-Man games but it would be nice to know what the components are going to be like. The game is crying out for wooden bits that represent the sheep, cows, farmers, etc. as something other than discs and cubes. Zev told us they are trying to make that happen but he's not sure if he can keep the costs down to meet the price point he has set (I think $60 pre-order and $70 or $75 retail). Our game took about 3 hours and it appears to scale linearly with the number of players. Oh, and this should be an excellent solitaire game and may invite competition as players could play solo starting from the same hand of occupations and innovations and compare scores. Jim and Will managed a tie with Jeff not too far behind. I ended the game with the smallest house (at least it was stone) and fewest number of children but still had a respectable score of 26 (the winners had 34). My occupations and innovations discouraged me from expanding my house early and gave me victory points for taking a very different path than everyone else did, which added flavor to the game. 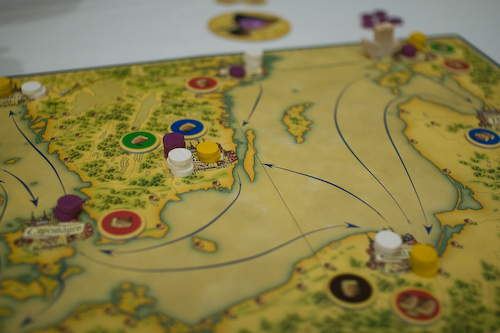 Jim has owned Hansa for a while but never played it, so Jeff and I agreed to play this fun but dry trading game of the Hanseatic League. I've never wanted to own the game, but it is fun and fairly quick - we played in about an hour. Not much to say here as this game has been out for several years. I won with 39 points, Jeff was close behind with 37. 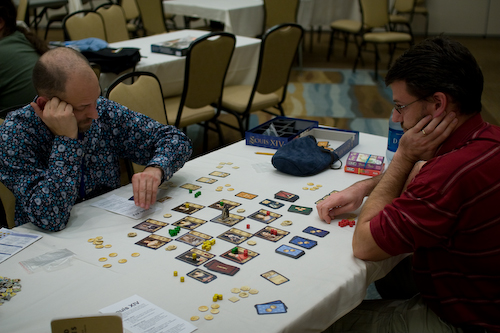 After a few beers in the bar we came back to the game room to play Louis XIV. Jeff and Jim are both sharks in this game, having played it quite a bit in their local groups. I've never played the game and wanted to try it given how much they play it. I insisted that we just start the game and allow me to make mistakes as I played, and boy did I ever. They both played extremely well and it came down to the final actions with Jim winning narrowly 51-50. There's a lot of game in that small box and I would gladly play this again, though I'm not sure that I need to own it.

That was it for Saturday - we finished at close to 3am on Sunday and the game room was still thriving with activity. I'll post a day 4 report shortly, followed by a summary of all of the games I played with recommendations.