My primary gaming buddy at BGG.CON was nowhere to be found on Sunday as he had an early flight to Indy, so I had to fend for myself to get some final gaming in as the convention wound down. I needed to catch the airport shuttle at about 3:30pm or 4:00pm so had plenty of time to play, though the game library was to close at 1pm. 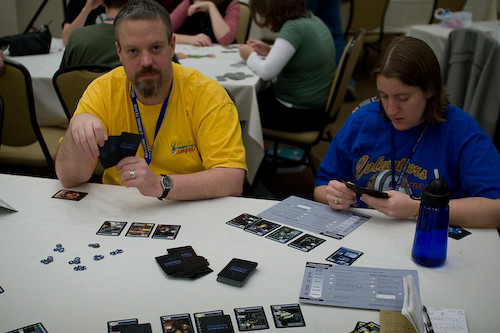 I slept in a bit more Sunday morning, waking at about 9:15am and taking time to pack and say goodbye to Greg. I was back in the game room by 10:30am and finally found Race for the Galaxy in the game library. Tim, Carrie, and Mark (Hamzy) joined me in this Tom Lehman game of galactic conquest using mechanics that will be familiar to San Juan players. San Juan is one of my favorite card games ever, so a game that takes the mechanics further and adds the possibility of expansions is sure to hit a sweet spot for me. 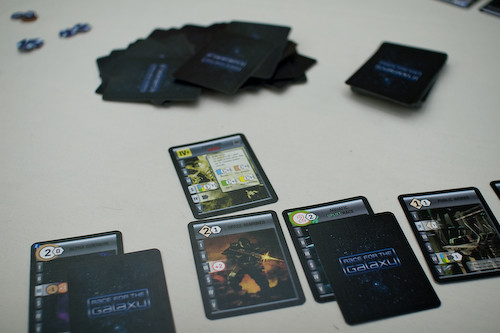 This game is very good and I found the human factors and iconography to be excellent. We were at risk of playing the game incorrectly, but Aaron Fuegi once again came to the rescue and gave us some tips as we started the game and kept us on track. I got some nice combos early that allowed me to accelerate my development of new technologies and got a nice engine going. The game ends when a player gets twelve cards in play and it was easy for me to accelerate the ending and claim the victory with 26 points, Carrie finishing second with 20. I'll definitely be putting in an order for this game and I hope it does well enough to see some expansions released. 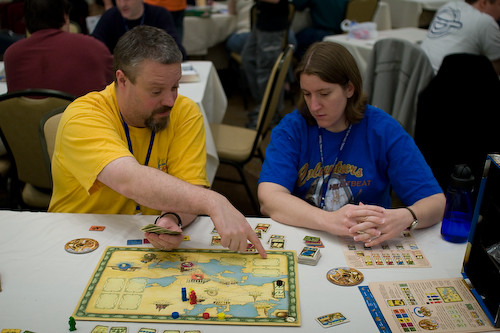 Next I pulled Thebes out of the library to try and squeeze in a game in about an hour with Tim and Carrie. Tim had played the game, Carrie had not so we took some time to teach but still managed to finish the game in just under an hour. We did play a shortened version of only 2 years instead of the prescribed 2.5 years with 3 players, but the game was fun nonetheless. I discovered that we played the first game of this incorrectly early in the convention - the debris you pull out of the excavation bags goes back in the bag after your dig, which keeps the odds of finding good stuff decreasing throughout the game. This gives a greater advantage to players that dig earlier, which I think is appropriate. Tim crushed us with 62 points, Carrie had 43, and I had 42. He had an extremely successful final dig that netted him about 18-20 points which made the difference.

Next up was Foppen, one of my favorite trick taking card games designed by Friedeman Frisse, who was at the convention. Nate Sandall joined Tim, Carrie and I and we had fun as always, though Carrie rightfully pointed out that it just isn't as much fun without Rita playing with us. Tim went from worst to first in the game and beat us with some clever play in the final hand. 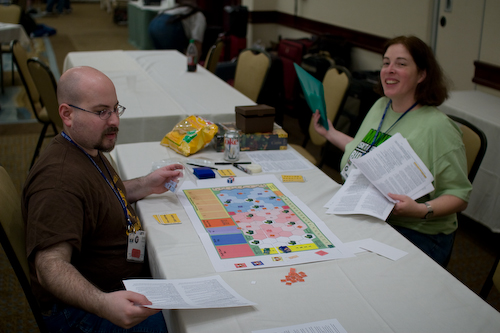 My last game of the convention was a prototype by Rick Young (Europe Engulfed, FAB: Bulge) called Leaping Lemmings. As you can surmise, this isn't a heavy wargame but is a light American style chaotic racing game. Each player has a set of lemmings he is trying to race through a canyon to leap off the cliff at the highest possible speed. Michelle Z ran the game with Jeff (Oboewan) also playing, and Jeff and I tied for the win with 14 points each. 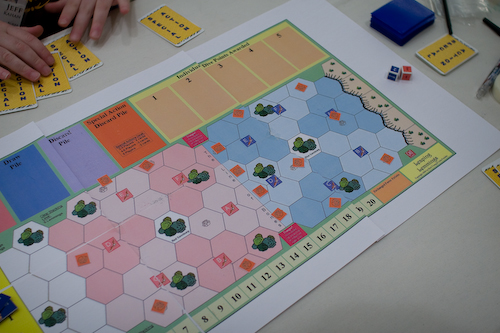 I don't have much negative to say about the game other than the action cards in the game may be very unbalanced. Still, this isn't the kind of game I like to play (it felt a bit like Zombies to me) but if a chaotic racing game with a dose of take-that works for you, this will be worth looking at.

Farewell BGG.CON - a had a fantastic time and I'll post a summary report on the convention and games I played shortly.