Last week I returned from another stellar BGG.CON gaming convention. The routine has become very attractive and fulfilling for me: play games, drink beer and eat some food at the hotel bar, go for a run, repeat. It is just the break I need after a hectic football season. My gaming trickles to nearly zero from August to October - check out this graph of games played by month from 2008-2011. 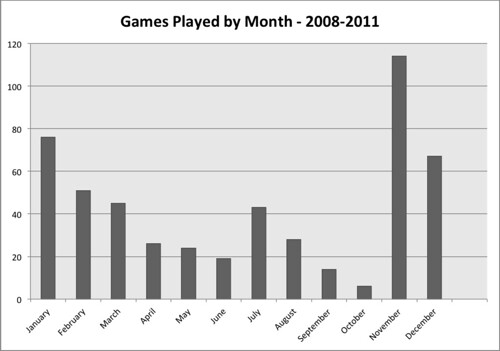 November certainly peaks every year, largely because of BGG.CON but also because I get back to hosting gaming, gaming with my local group, and gaming over the Thanksgiving holiday. December looks a bit lower than expected, but I suspect I'll get in 25-30 new game plays this coming month.

Great job Derk, Aldie, and the rest of the BGG.CON for putting on another great show. We are moving to a new venue next year so it will mix things up a bit, but I'm sure they will maintain high standards for the event.

Let's break down what I played this year.