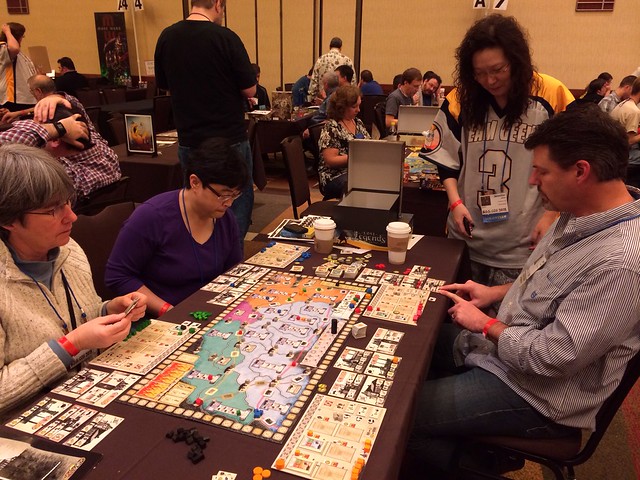 On Saturday morning Jim and I strolled through the hot games area and were invited to join a game of Kohle & Kolonie with fellow Oregonians Lorna and and Mary. This is a hard game to explain and was a bit complex with the symbology and illustration. The basic idea is to buy into coal mines, do various upgrades in your player area, send your workers out to help in the rail network, and avoid mining disasters (cue the Bee Gees song). It feels a bit like Age of Industry but has some interesting company merger mechanics as well. Decent game. 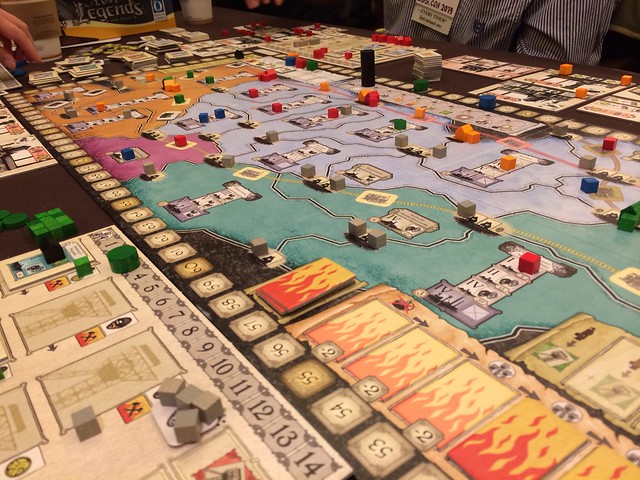 The graphic design takes some getting used to and could have used some work on distinguishing similar icons (engineers vs workers). Thanks to Jennifer G (again) for volunteering her time to teach us. 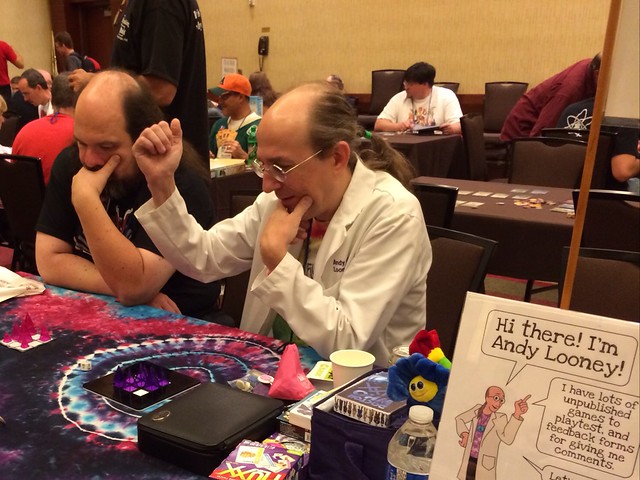 Noted designer and publisher Andy Looney was on hand running games. We still love our Fluxx! 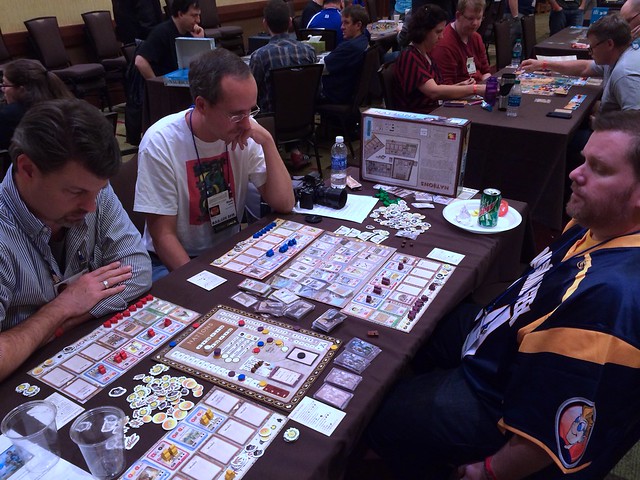 I've already played two civilization building games this weekend, so why not a third? Jim and I joined Mark and Mike for the new civ game Nations, a game comparable to Through the Ages (think civilization development without a geographical map). Each player starts with a base set of technologies that can be powered with meeples (e.g., you can pay to out a meeple on your military technology to get a soldier). Every choice like this will cost resources but ultimately produce a benefit. The game has its share of special even that happen, an arms race very similar to Through the Ages (though less punishing), and upkeep during era transitions where you pay your dues like food for soldiers. 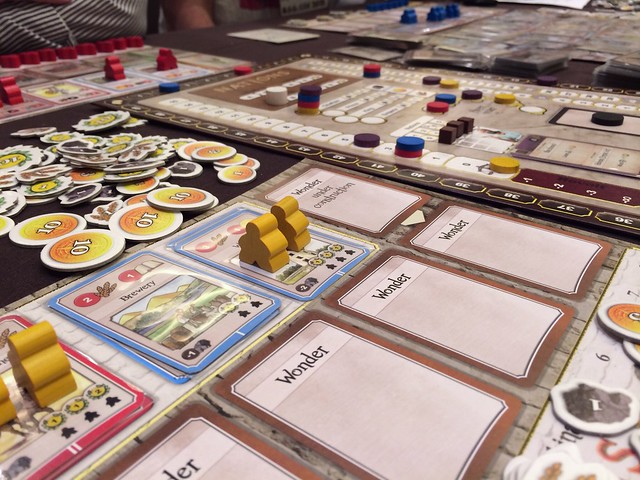 The game felt just as rich as Through the Ages but maybe a bit more streamlined and shorter. I look forward to playing again soon. 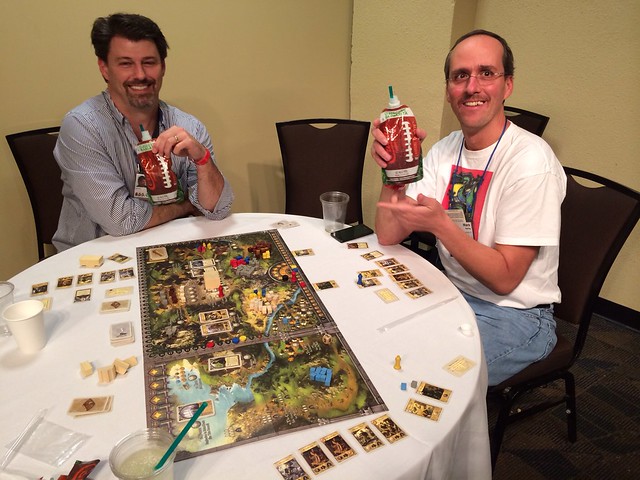 Jim and I have a tradition of trying to play Pillars of the Earth each BGG.CON, a game special to us as we played it early at the original Essen Spiel release. I view this game as the first copycat game after Caylus and like it more than the ancestor, especially with the rich theme and beautiful graphical design. Mark joined us and we played with the expansion. 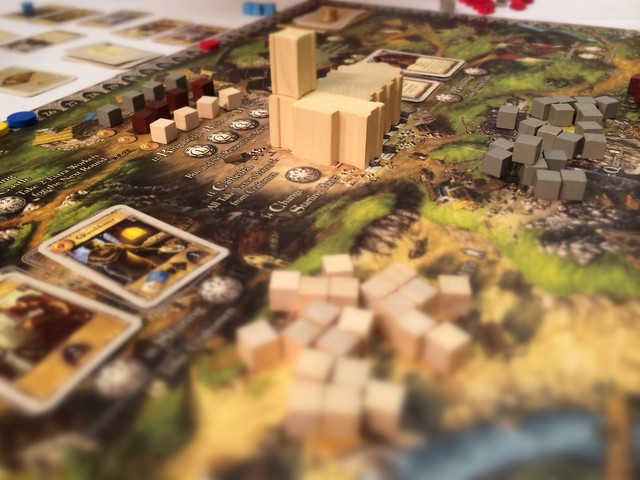 Jim got off to a great start with an early VP bonus and we were never able to catch up, though it was tighter at the end than we expected. Still love the game and we played in under two hours. 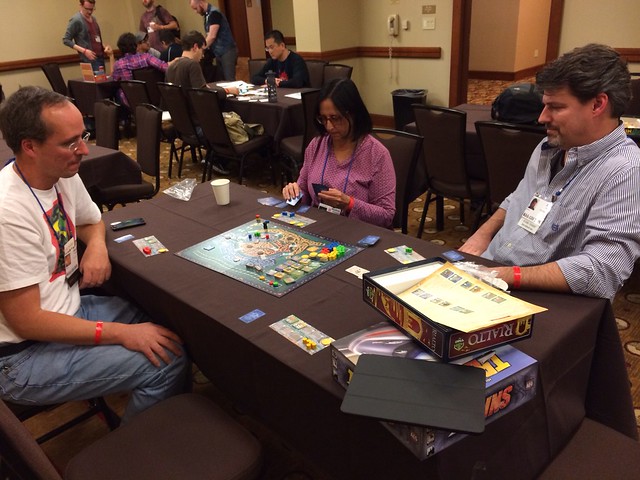 The last game of the night was the new light Euro release Rialto by Stefan Feld. My friend Nadine from Israel was able to join us for the night cap. 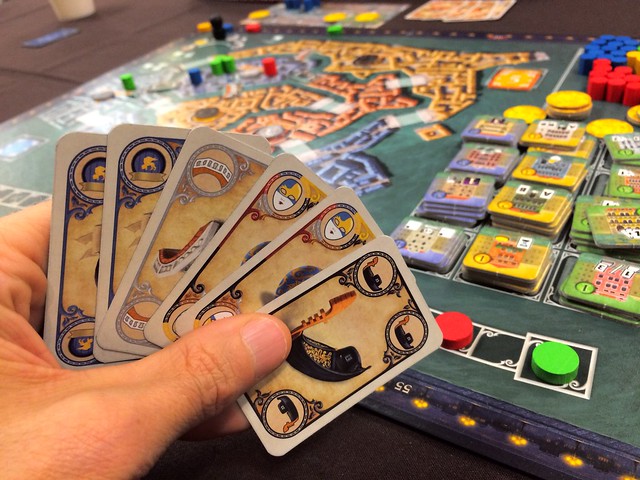 Rialto is a card drafting and area majority game with some nice twists. Players can use cards to buy special buildings that can be triggered with gold to help draw better cards, improve buildings, and other special actions. Resources are tight and there are only six total rounds. We were zoning out by the end and needed to get some sleep for our 18xx game in the morning. We still managed to swing by the bar for a nightcap whiskey first.