I’m still fighting in Carentan, but the resistance turned out to be much weaker than expected.

About a month ago I started my Solitaire Advanced Squad Leader (SASL) campaign and I’ve been making steady progress. 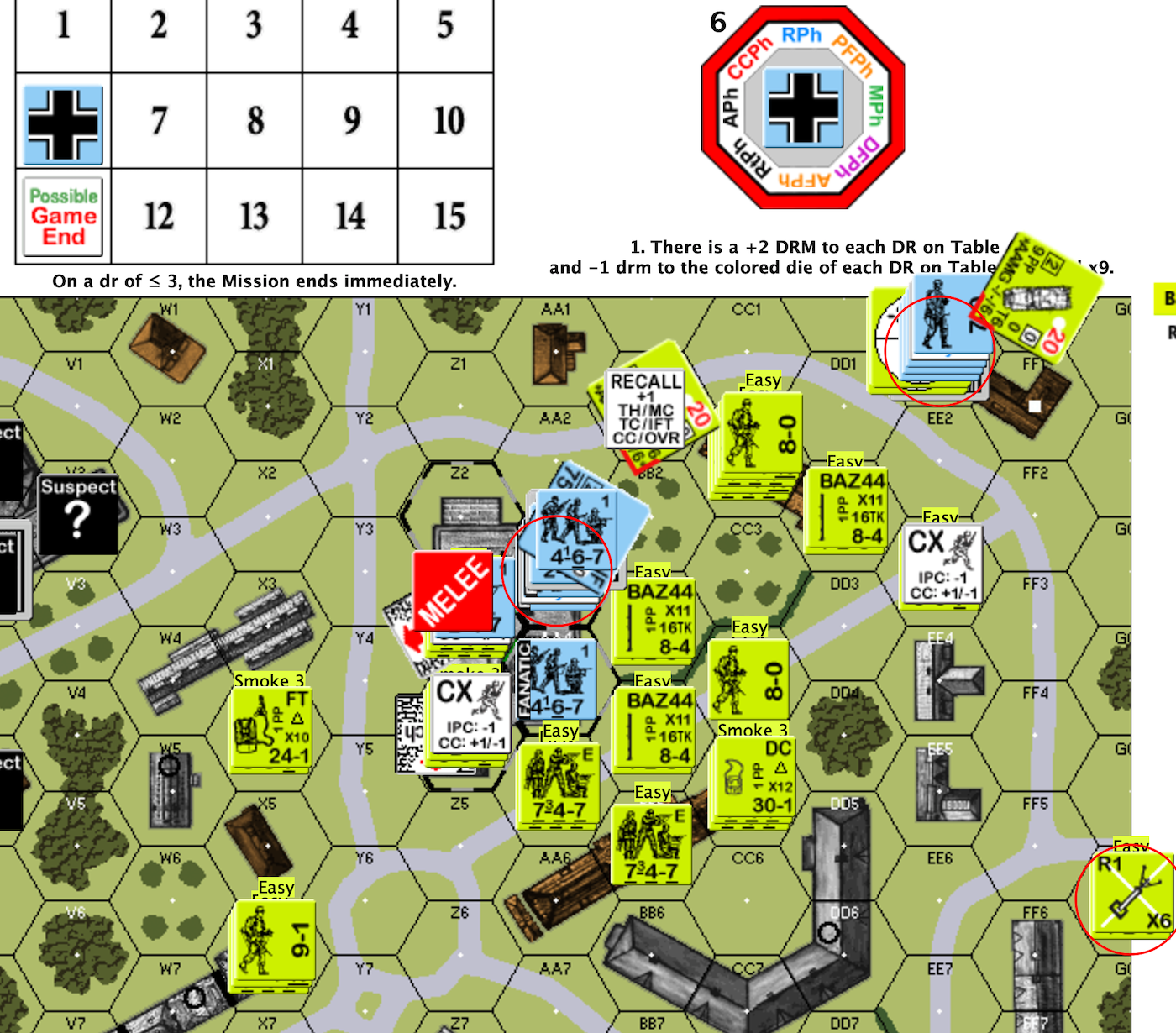 The Fortress scenario at turn 6

If you read the first post linked above, you know that I was worried about this being the first mission of the campaign. This is considered one of the toughest SASL missions. I certainly got lucky with the map setup, having a hill to run around and a place to setup my mortars. Not shown on the image above is a hill top about 10 hexes below the fortress where I have two 60mm mortars firing.

I’ve also been very lucky on activations – that’s what turns the Suspect? markers into real enemy units. So so many of those markers have poofed away with lucky die rolls for me – either a failed activation, or an activation followed by a (modified) 7 DR resulting in no unit.

So, I’ve managed to breach the fortress in two different locations with my attached combat engineers carrying demo charges. An enemy activation just happened that created an infantry gun in the upper level of the fortress but I think it is too little too late.

Now my focus is on keeping my guys alive and ready to fight the next mission. That’s the fun of a campaign! Details:

17.32 ELIMINATED: Each Directly Attached FRIENDLY unit removed by any other means (e.g., CC, KIA, K/#, Failure to Rout, Commissar rally [A25.222], Capture, Interdiction, Surrender [A15.5], Falling [B11.41], non-Survival [D5.6]; see also 17.43 & 17.621) is eliminated from the company’s OB (but is subject to Replacement in step 17.8). Each Directly Attached Weapon unpossessed/Captured at Mission end, eliminated due to Self Destruction (A9.73) or Random Destruction (A9.74) is also removed from the company OB. Place each unit/Weapon thusly eliminated in the “Eliminated from OB” box at the bottom of the SASL CG Roster.

So far I’ve only lost a half squad, and that due to a “double break” which means he will be retained. The biggest risk is that melee you see happening in the fortress, though my opponent is down to a 2-4-7 HS vs. my two 7-4-7s.