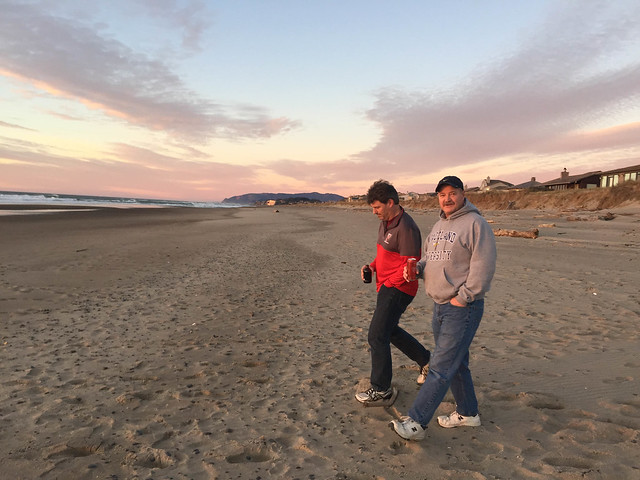 I haven't written about my Salishan gaming retreats in a while (since 2011 I think) but having just held my final one I think I should wrap things up with a post. This is mostly photos with a bit of commentary. You can see the full set of photos over on Flickr.

For this swan song event before we sell the house I was able to extend the event to a full week plus invite my friend Jim from Indiana. We designated the front part of the week (Sunday through Thursday evening) as being a wargaming / heavy gaming portion, and the remainder (Thursday through Sunday afternoon) being the vintage gaming portion. No games published after 1 Jan 2005 thank you very much. 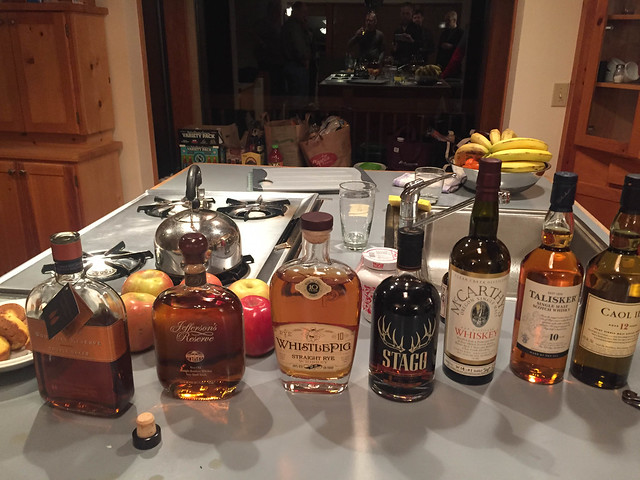 I always try to sprinkle in some special activities and we included some whiskey tasting on Sunday and Wednesday evening. 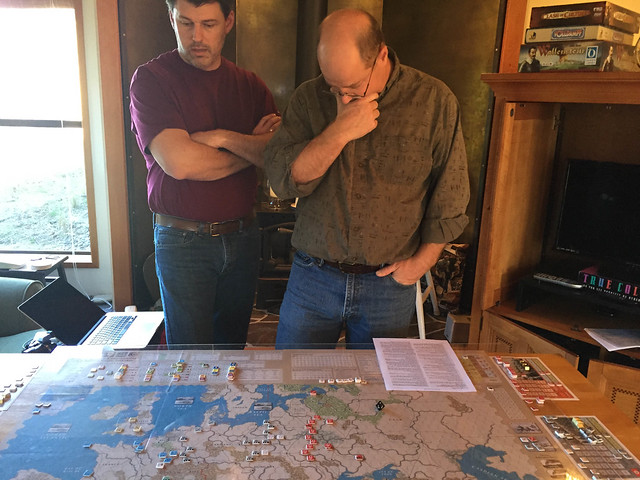 I spent Sunday playing The Supreme Commander with Jim and Ken. We borked up a key rule related to follow-on combat with armor that significantly hindered my efforts as the Germans. We also played with a less constrained diplomacy rule that sounded fun at the time but ended up with way too much wackiness. I'm taking another go at this with Ken and Doug tomorrow and can't wait. 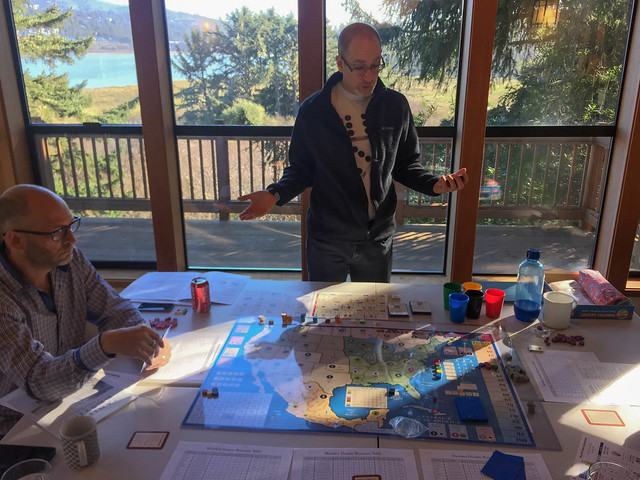 We didn't play just wargames in the front part -- heavy multiplayer strategy games were also in the mix. I finally got to play Manifest Destiny and loved it. 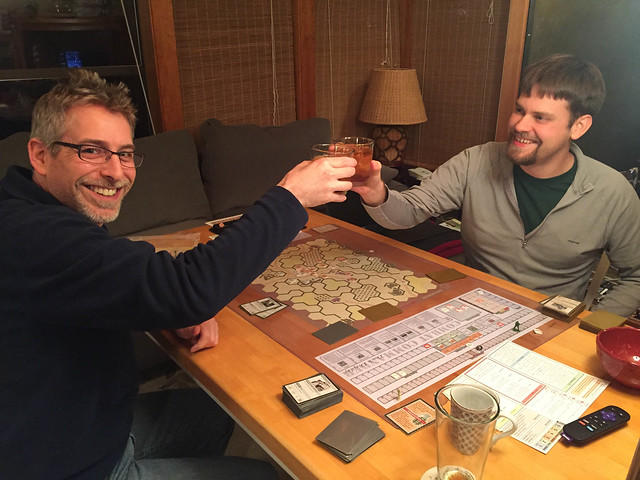 I was frequently called upon to make a batch of Old Fashioned cocktails. 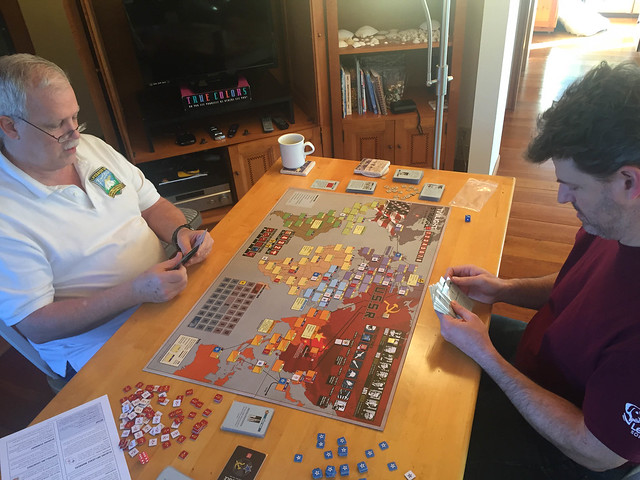 It was great seeing KC join for the full week and get more experience with wargames. 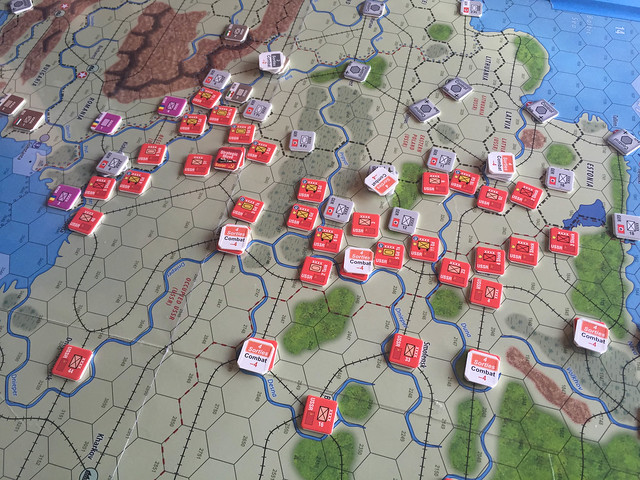 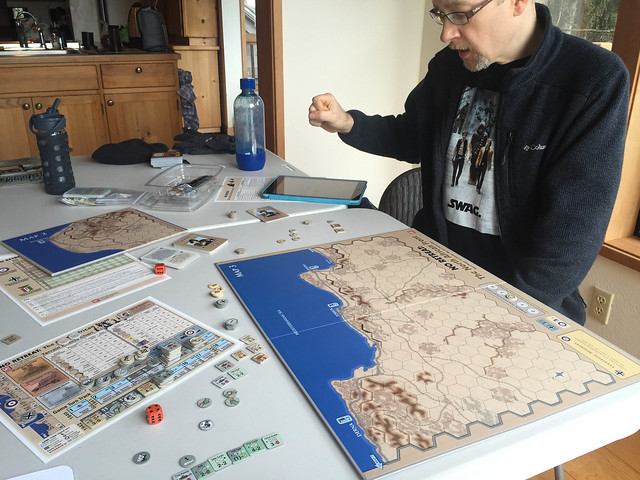 A big highlight for me was an all-day session of No Retreat: The North African Front. This game is deceptive what with its very low counter density and small maps. Make no mistake there's some complexity to this game but it really started making sense to us as we finished the scenario. 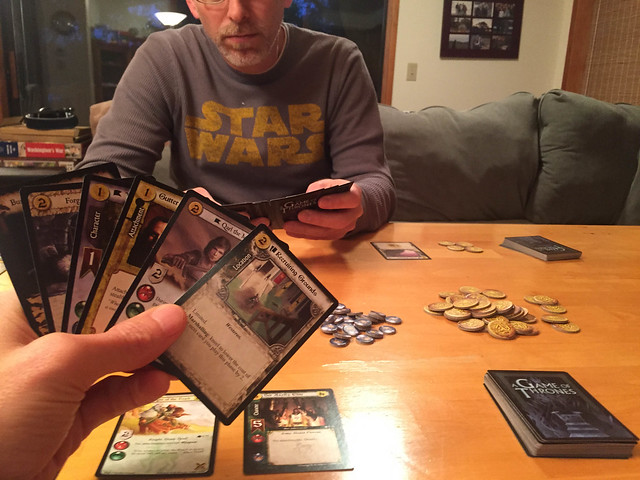 I had some old Game of Thrones Collectible Card Game boosters and draft packs sitting around at home so I ran a lightly structured sealed booster event through the week. For some it was a new gaming experience and turned them on to the current Living Card Game which is a good thing. I'm always looking for more playing partners. 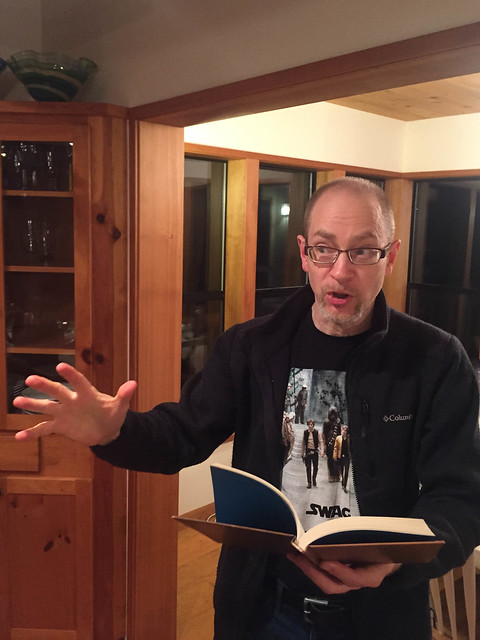 Doug blew us all away with his Star Wars Shakespeare reading and performance art as a prelude to a massive Star Wars X-Wing battle. He stole the show, maybe the entire week, with that performance. 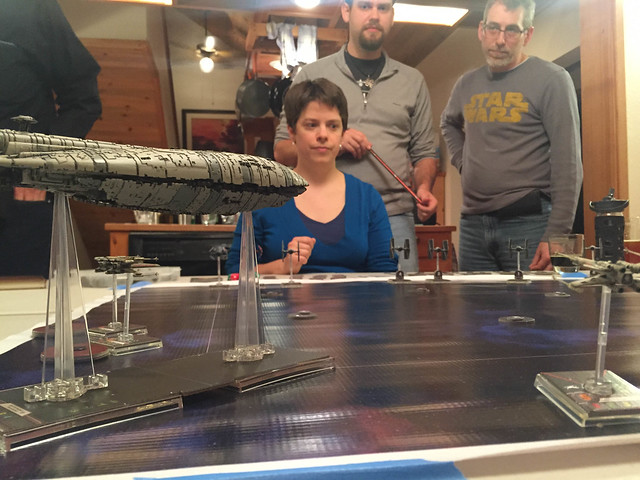 Unfortunately we let the rebel alliance down and did a terrible job protecting the rebel transport. We played Virgin Queen but the freaking protestants won in just two turns! I was the English and unable to do much to stop them. We are doing a rematch in a few weeks. 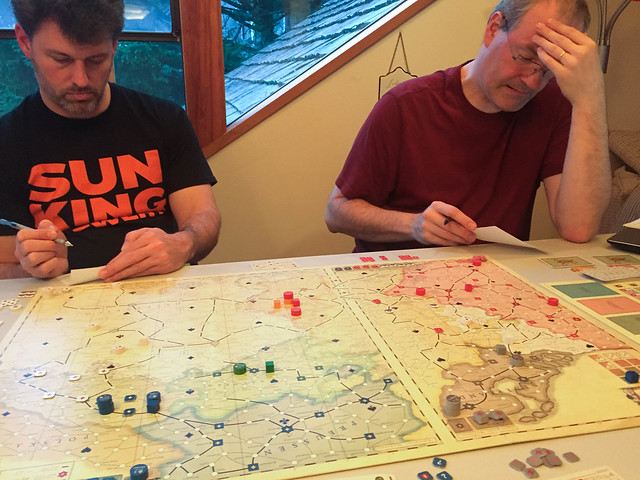 David continued his winning streak and won an early victory in Maria, an outstanding three player wargame that is the successor to Friedrich. 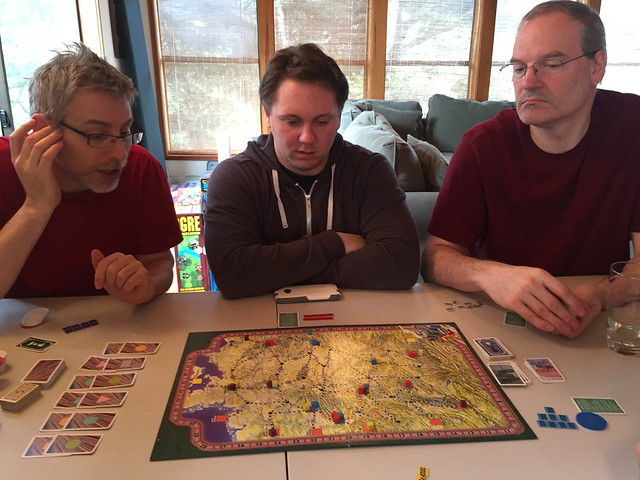 On Thursday we shifted to vintage games, and my copy of the Martin Wallace classic Volldampf was a big hit. Great choice if you want a Steam-like game with simpler choices. 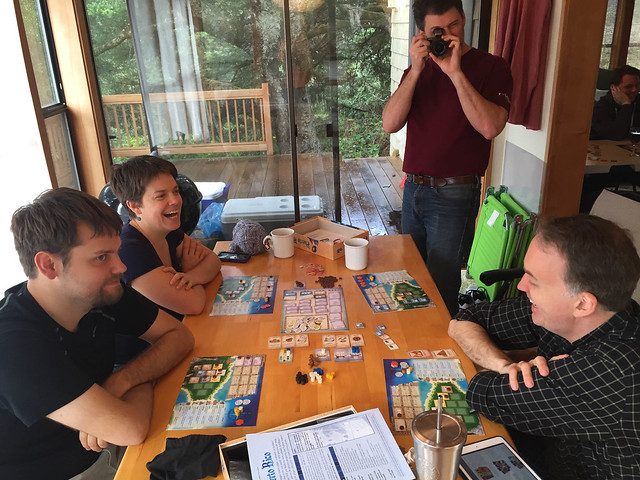 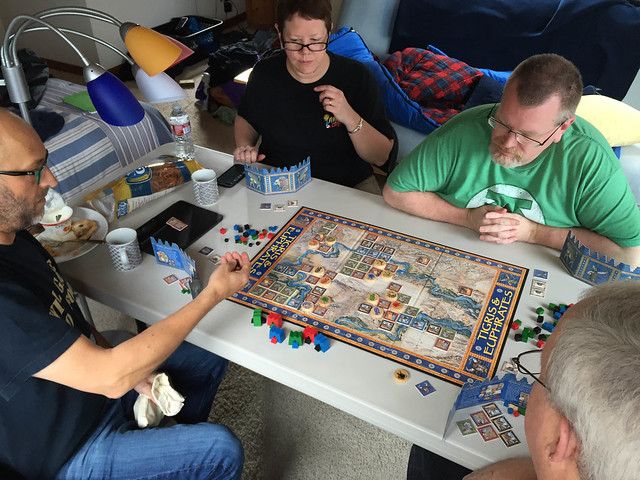 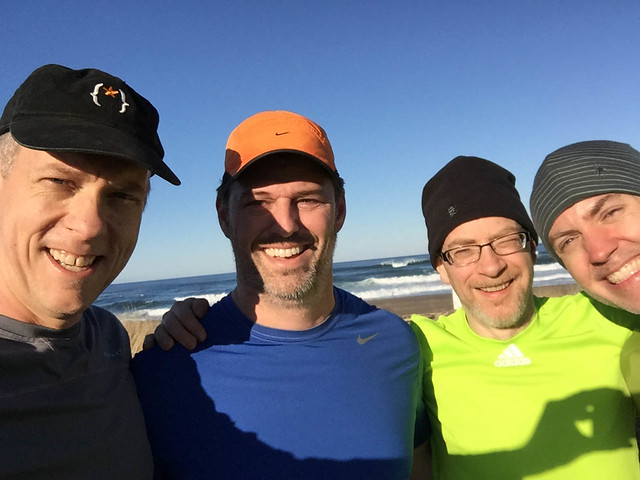 I ran with someone every morning but one, and the week ended with this highlight. I convinced Jim, Doug, and Greg to run on the beach with me at high tide and it was a nice struggle. 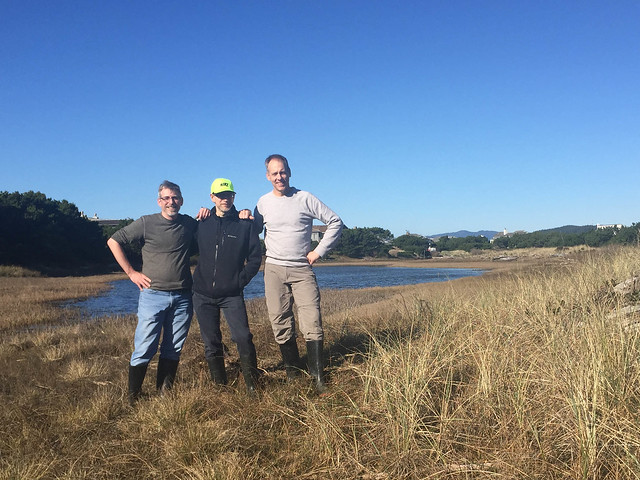 I also talked Matt and Doug into doing my 2-3 mile low tide loop by Siletz Bay and the lagoons. 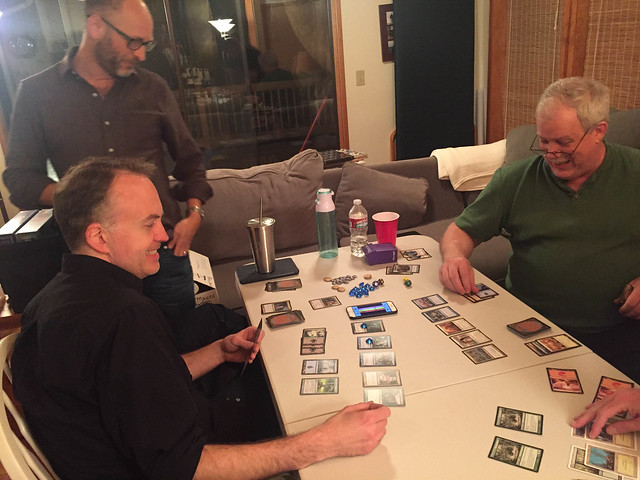 On Saturday night we ended up with a Magic: the Gathering draft tournament, this time featuring the Conspiracy expansion which is designed explicitly for drafts. 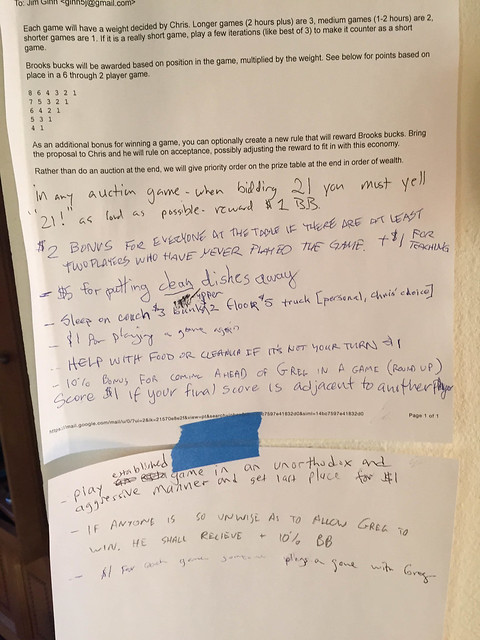 As a final note, I shared my "metagame" rules which is an overlay event whereby folks collect "Brooks Bucks" throughout the weekend, with the added bonus of being able to write in new rules if you win a game. We used the total bucks earned as a way to rank order prize table selection on Sunday.

Thanks to my many friends who joined me over the years going back to 2005. Places come and go but friendships are lasting.