Last weekend I had a small group of friends out at the beach house for some gaming. This is my mostly regular gaming group, the RipCityGamers, and was an experiment of sorts. This group has a long-standing tradition of going to Doug's Sunriver house twice a year; I had the pleasure of attending the event late last spring. I offered up the beach house as an off-cycle choice and several of the core group took me up on the offer. Mike and Eric have already done some writeups on the weekend.

I drove Jacob and Dave out Thursday evening, stopping for some burgers and frosties along the way and arriving about 9:30pm. After unloading the games, I went to work installing some speakers and a receiver while Dave challenged Jacob to a Magic: the Gathering duel. They used a couple of decks I've had around for about 7-8 years with Dave winning easily.

Friday morning after canoeing we sat down for a game of Runebound. This game is holding up pretty well for us when played with three. There's no deep strategy here, but I like the role-playing element (in terms of character-buffing and collecting) and downtime has definitely decreased as we all learn the game rules. There's usually only a small amount of player interaction in the game, though in this instance Dave and I went hero vs. hero. 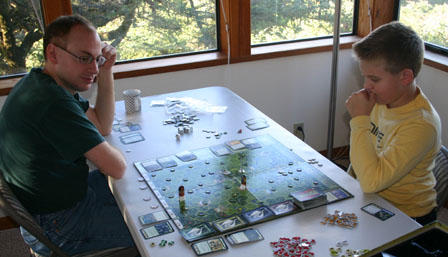 Dave, Jacob, and I in the loft for a game of Runebound.

Dave had a shot at defeating High Lord Margath but couldn't pull it off. After several dice rolls left me stranded in the hills, I was able to move in and defeat him myself.

Next up was Einfach Genial, the Knizia abstract released last year. I quite enjoyed this in my only prior play in Melbourne. I'm pleased they didn't try to paste a theme on this game. Teaching it is simple, scoring is simple, and I think there is probably some serious depth in strategy. Player interaction is high as there are many opportunities to block opponents to minimize their scoring opportunities in their weakest colors. Dave blew Jacob and me away; Jacob and I effectively tied with me barely winning on the fourth tiebreaker color. 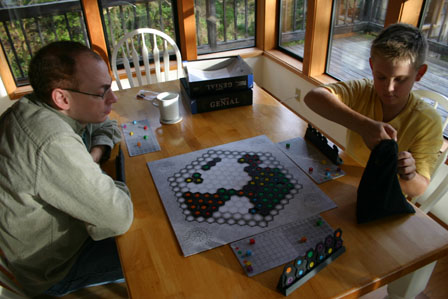 Dave challenged Jacob to a chess game, winning handily but providing some good coaching along the way. It would be great if they could play more together - Dave would be a much better teacher at this point than I. 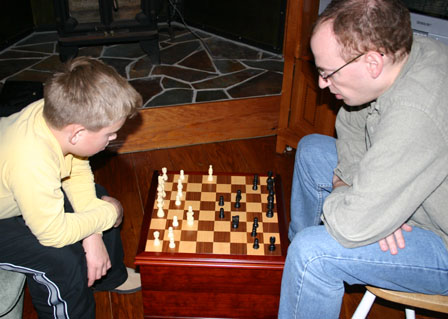 Chess near the opening.

Next, Dave brought out Station Master. This is a relatively new game that I new almost nothing about, and I was pleasantly surprised. This is a light card-game with a serious take-that element to it andit was a fun ride. 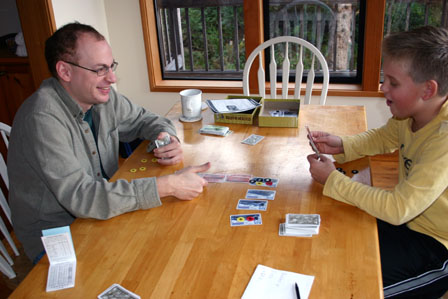 Dave and Jacob building out their trains.

Players take the role of station masters, outfitting train locomotives with cars and passengers. Cars are cards played from a player's hand, while each player has a collection of chips representing passengers. Each chip has a hidden value from 1 to 3. When a train is scored (after it fills up), players score the value of the train times their own passenger count. Sometimes the train value will be negative. There are cards that can swap cars between trains, you can put animal cars on passenger trains to spoil them, etc. Most of the strategy comes in how the passenger chips are played. Fun one and given the low price I'll probably pick up my own copy.

The last play of the day before Doug arrived late Friday afternoon was A Game of Thrones: CCG. Dave had been working on a deck so I played a weaker deck to try some real playtesting (at least I'm sticking to the story that the deck was weaker - couldn't have been my play). 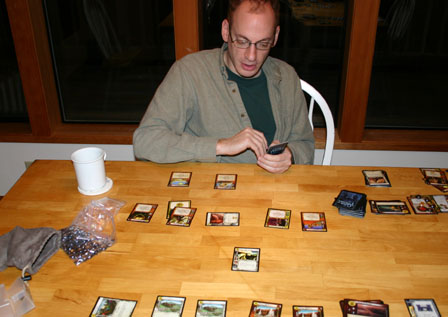 Dave squares off against me in A Game of Thrones: CCG.

I like this game for its depth and for the theme - most everyone who has read the books in this series is eagerly awaiting the next one. Seeing the characters and locations come to life in the game artwork is very appealing. I held my own in this game for a while, but over time Dave was able to dominate and we eventually called the game.