Have I mentioned that work has been pretty busy lately? I'm at the point where I almost feel guilty taking any time to write entries even when I do have a moment to relax and take a breath. It is therapeutic though and I really should make the time.

Getting back to the gaming weekend out at Salishan, I was last talking about the gaming up until Doug arrived on Friday afternoon. I wasn't expecting him until the evening and it was a pleasant surprise to see an email from him Friday morning that he would arrive early.

Dave and I were playing the Game of Thrones CCG when Doug arrived (Jacob was reading). Doug talked Jacob into a game of Yinsh (or vice versa), a game my kids have been playing quite a bit lately. 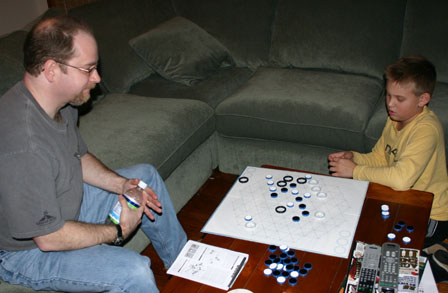 For those of you not familiar with Yinsh, it is part of the Gipf series of two player abstract games. I own Yinsh but haven't even played it yet. I have played Dvonn quite a bit and love it; Yinsh looks even more interesting to me. All of the games of Yinsh I've seen tend to be close with quite a bit of tension - it seems like a game where you can come from behind and win. Dvonn, on the other hand, often feels like it is over halfway through the game.

Time for a four-player game. Doug and I were very interested in breaking out another scenario from the Settlers of Catan Book; we opted for a rematch of The Great Race, a scenario we played out at Sun River last year. 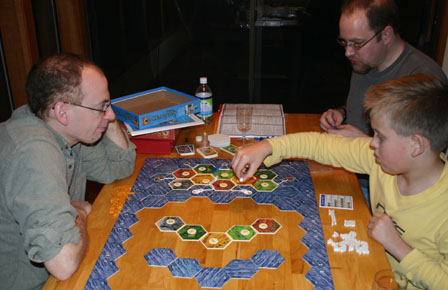 Setting up the board for Das Grosse Renen.

The only goal in the game is to be the first to cross the board and build a city near one of the gold mines - victory points are for sissies! The exploration process was quite humorous, with Doug and I discovering most of the unknown territories. Doug had a knack for discovering more seas, while the first two lands I discovered were (1) redundant with lands on which I already had settlements, and (2) well equipped with the number 12 for my resource-producing pleasure. 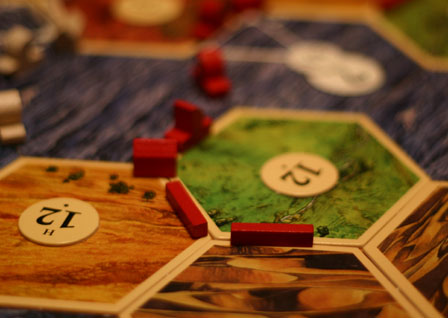 Hey, 12s may be uncommon but I'll be rolling in it when they do come up!

I made Doug, Dave, and Jacob promise to do the chicken dance each time a 12 came up thereafter. They got to entertain me just once the rest of the game. I shouldn't be too bitter though, as I managed to win the game due to an excessive production of sheep at the end of the game (plus a sheep port).

At this point Mike and George arrived, and Dave brought out Dawn Under, a purchase he made during a stop at Rainy Day Games on our way out to the coast. This is, ugh, a memory game that has something to do with vampires, coffins, graves. It is a nice looking game that would probably appeal to families if it weren't for the theme (though the vampires are quite cutsie). 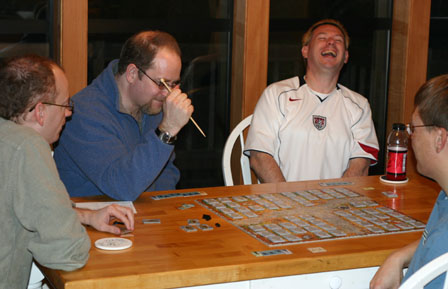 Yes, Doug, I too wanted to drive a stake through this game.

George was then eager to try a new dice game he picked up called Sharp Shooters. We were all a bit skeptical on this one and gave him a hard time, but in the end I think it was better than any of us expected. Think of it like a game of Yahtzee where players share dice. There's some strategy in timing as you want to avoid setting up your opponents for scoring opportunities, but you still need to push your luck a bit to score. I'd play it again and I'm certain my kids would like it. 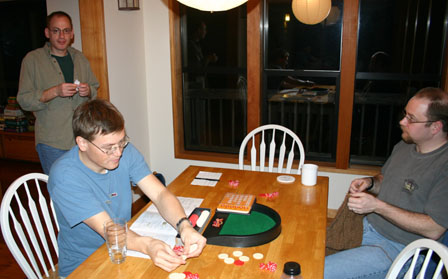 George getting the dice and chips ready for Sharp Shooters.