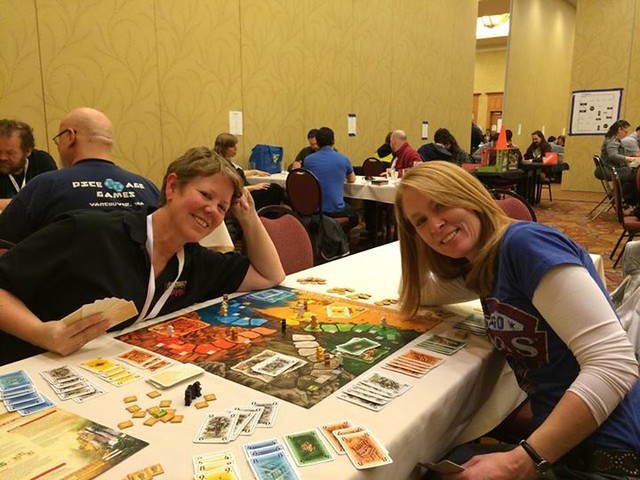 I spent last weekend GameStorm, a local convention I started going to in 2003. At that GameStorm I met KC for the first time And found my local gaming group. I think I've missed about 2 or 3 since then because it falls on spring break but I always try to go if I can. They've settled on a great location at the Vancouver Hilton and I see no reason for them to ever move.

This year was even better than most because Julie joined me for the first night on Friday. I arrived in the early afternoon on Friday and after checking in joined the Z-man Games tournament for the not-yet-released Pandemic: the Cure. They set us up into two separate 5-person teams and each team played three consecutive games with successively higher difficulty.

Pandemic: the Cure is a dice game version of the modern classic cooperative game Pandemic. It shares the theme and core concepts with the original game: the players are agents with special abilities trying to eradicate the world of diseases that will destroy civilization. The Cure differentiates the player abilities even more (in my opinion) by giving each role a different set of dice in addition to different abilities. Hence each role has its own information card along with a special set of dice. The diseases propagate through die rolls but with a simplified map showing a circular series of continents. We had time pressure with only 30 minutes to play each game which added stress but certainly reduced over-analysis. We didn't win the tournament but enjoyed the game and I look forward to its release in2014. 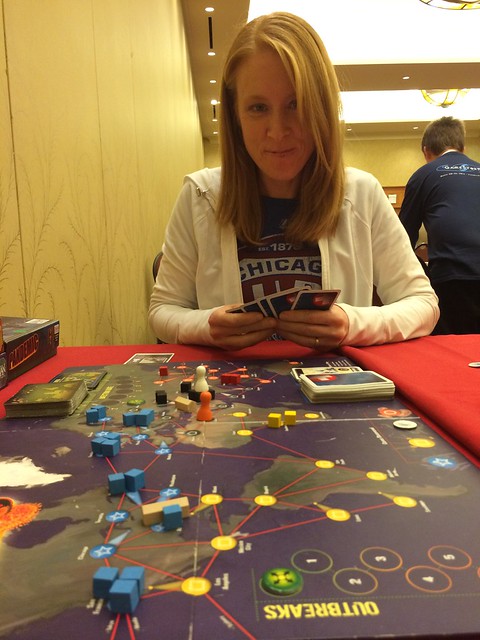 So Julie had never even played Pandemic so we checked out the copy from the library and played the base game. We played on the easiest setting and won easily but I'm sure I've converted her to a regular player. I recently bought the 1st edition copy with the On the Brink expansion so look forward to playing more at home.

After dinner at The Main Event (free truffle fries with the Yelp coupon) Julie and I joined Rita for a game of Lost Cities: the Board Game. I've enjoyed every play I've had of this (and the close cousin Keltis). It captures the original two player card game feel and adds enough new ways to score to keep things interesting. 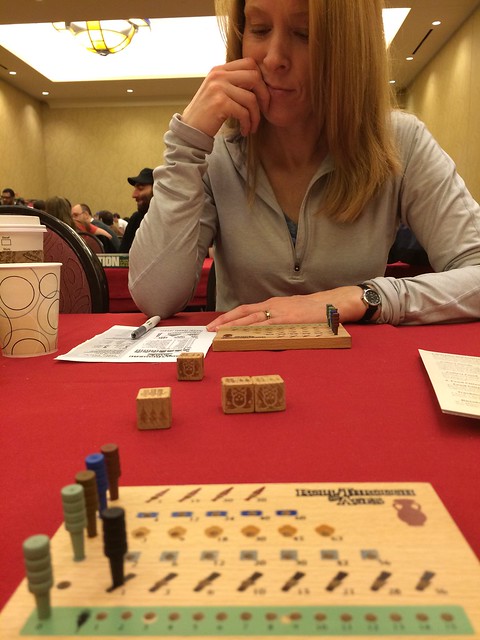 Alas I only had Julie with me for a short while on Saturday, and after a 4 mile run through downtown Vancouver we played one last game: Roll Through the Ages: the Bronze Age. I've been convinced for some time that we should own this game... it looks and feels like it should be a bar game and, well, we spend a lot of time in bars. Julie edged out the win when I failed to notice that the end of the game was imminent. 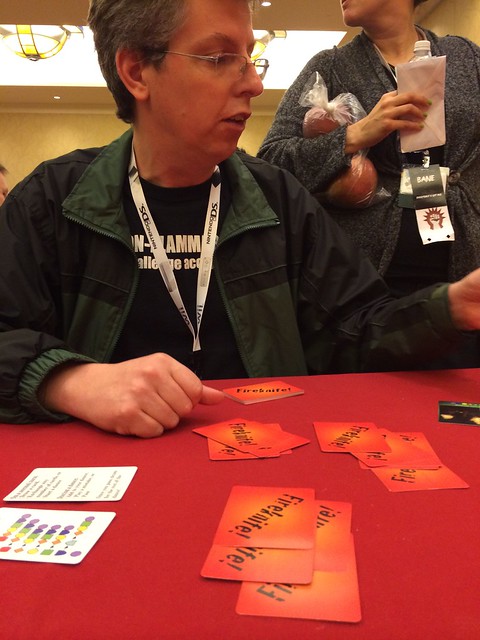 Peter Drake sat with us as we were finishing our game and offered to teach me his new game design Fireknife! This is a light multiplayer press-your-luck and climbing game with some similarities to KC's Havoc: the Hundred Years War that we released about 9 years ago. Players are Samoan fire knife dancers attempting to put on the most impressive dance. Players draw or exchange cards trying to collect a good set of dance move cards until someone decides to start dancing. This is where the game deviates from other climbing games: each card played by another player can only be followed (or in some cases preceded) by a specific type of card. For example, a knife toss must be followed by a knife catch. The finale must be the last card played. Players take turns playing a single card at a time (they can also opt of the dance if they want to observe) until everyone passes.

There are some special action cards that can be devastating, such as discarding your entire hand or the dance cards played so far. This pushes the game into the very light "take that" spectrum for me, which I'm sure is exactly where Peter intends for it to live. My main complaint is the lack of any reward for finishing with the second best dance in a larger multi-player game. It was frustrating achieving a very high dance score but not gaining any points when I was barely edged out a few times. I suggested he consider giving half points to the runner up when there are more than 3 players. Fun game and Peter produced a very nice looking prototype deck. 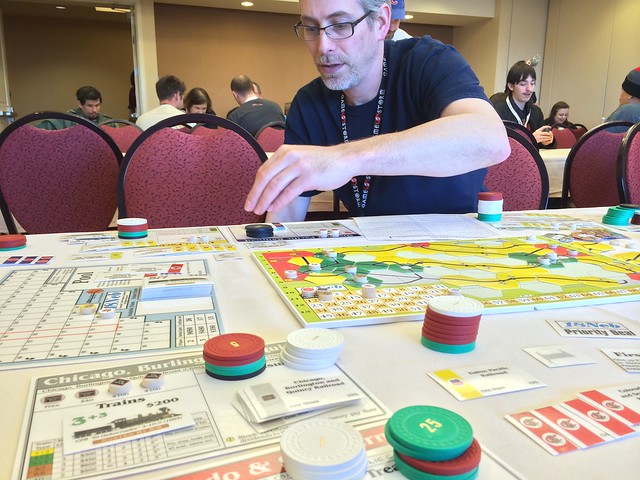 Saturday afternoon we did our regular 18xx game, this time 18NEB with Matt and Greg. I still love 18xx but my play quality seems to be declining every year I play. Or maybe everyone else I play with is improving. As is the norm with18xx games that you only play every few years, we screwed up a few rules in a major way. Matt would have won in any case I think, so we were happy to wrap the game up around 5pm and head out to dinner. 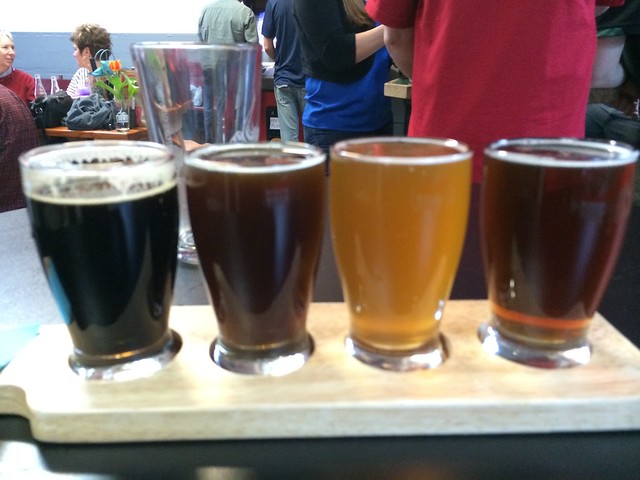 For dinner we explored downtown Vancouver and enjoyed the Drink This celebration on foot. We enjoyed several local breweries, including Loowit Brewing and Doomsday Brewing. The highlight for me was probably the Beat Down Beet Wheat. We then enjoyed dinner at Charlies Bistro and had some fantastic shared sides and a few cocktails. 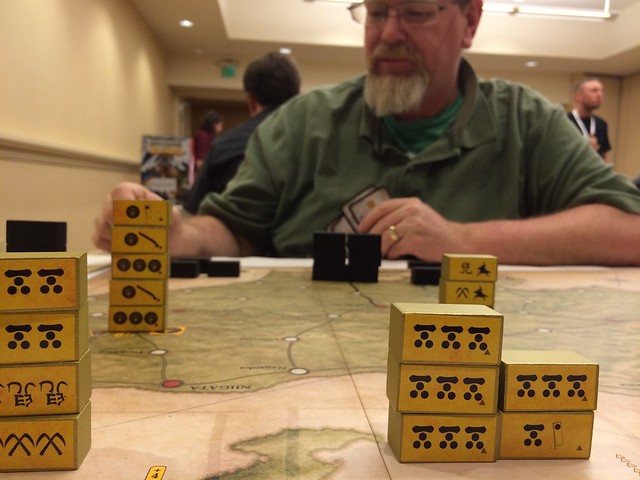 Ken and I joined up late Saturday evening for a game of Sekigahara, a two-player light block wargame not unlike the Bowen Simmons games we have been playing. I got completely destroyed by Ken but it was nice to learn the rules and finally get my copy played. I think we will return to this after we play Napoleon's Triumph and Guns of Gettysburg. 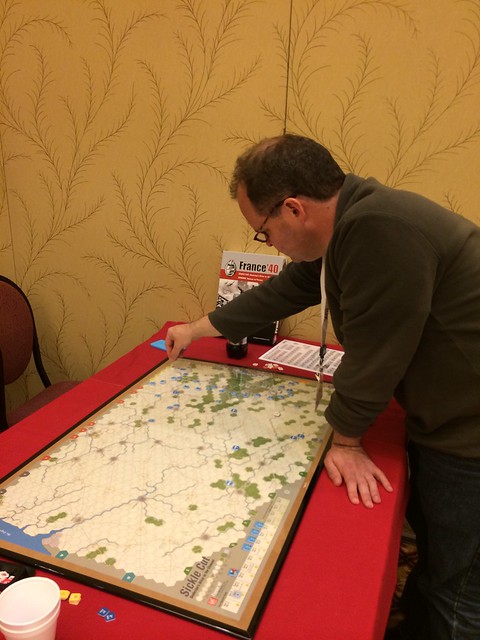 My last game of the convention was a scheduled wargame with Tripp: France '40. This is the latest Mark Simonitch game and I'm finding very much like his designs. This game covers part of Case Yellow, Germany's invasion of Belgium and France in 1940. We played the Sickle Cut scenario which depicts the latter part of Gurderian's drive to the channel. I played the French and remembered enough about how Myk stopped me in Ardennes '44 to put up a good line of defense. We didn't quite finish the game but got far enough along to see that the German's were unlikely to win. I could have played faster which I'm sure will improve now that I've got two games with this system under my belt.

A want to extend a hearty thank you to the GameStorm volunteers that put on another fantastic show this year. I hope to return in 2015.