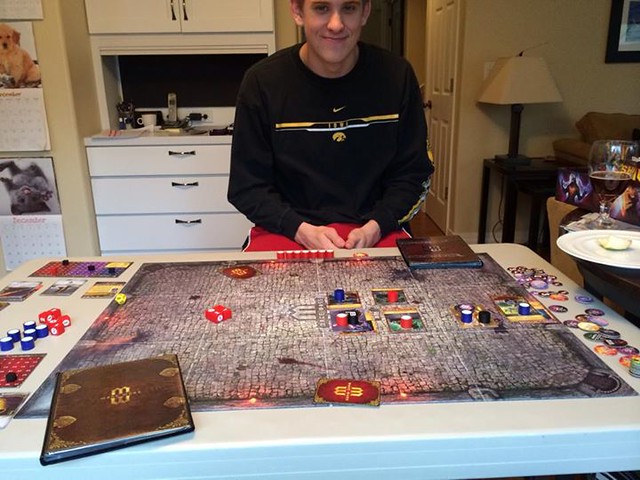 I've enjoyed a flurry and wide range of two player gaming since the start of the year. Here is a brief rundown.

I first played a demo of this at BGG.CON and my family was nice enough to oblige me with a copy for Christmas. Jacob and I dove in while he was home over winter break and we both got hooked. I had to leave town on some emergency travel but that didn't stop Jacob from introducing the game to one of his friends. He even spent some time deck building while I was away.

Mage Wars is a two player tactical arena combat game that has elements of both Summoner Wars and Magic: the Gathering. There are different schools of magic so the different mages can have vastly different strategies (and may in fact be unbalanced, but I'm too new to the game to make that call). The big difference from most games of this sort is that each player has pre-built spellbook from which to choose cards to cast each turn as opposed to randomly drawing cards. This alleviates on big complaint from card games of the CCG/LCG ilk and gives the players much more control.

The duels can turn into a sprawling, complex mess and can last up to three hours -- and still we love this game. Matthew and I played over 5 duels in the span of two weeks and are eager to keep playing. I sold off Summoner Wars after getting this game. 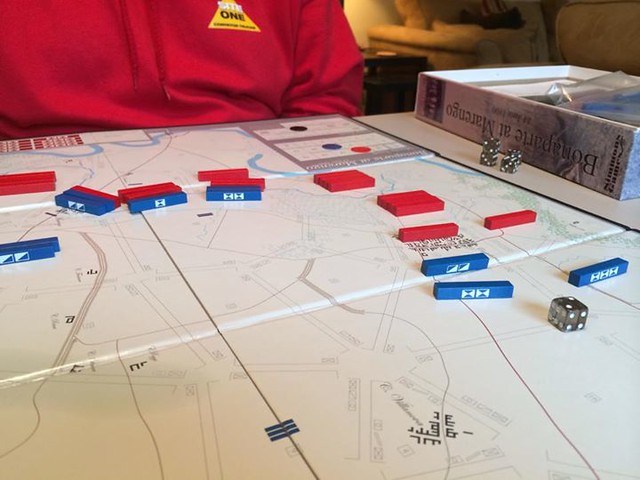 Ken and I are committed to exploring the three Bowen Simmons block games. These are known for their beauty and simplicity. So far we've played three games of Marengo and are not quite ready to move on to Napoleon's Triumph yet. Ken has handed my you-know-what to me in each game so far and we both feel like we wan to have a balanced, tense game before moving on. This is a game of maneuver and it is easy to make very small tactical errors that can have devastating effects. I'm hoping to play this again within the next week.

Along with Mage Wars, Matthew and I have been progressing through the Pathfinder adventure card game. It scratches our role playing game itch in short bursts of about one hour per scenario. There isn't a significant amount of player interaction or cooperation in the game which is my main complaint -- Matthew and I tend to go our own ways to different locations and fight our way through trying to find the main bad guy. We interact more after the scenario as we share loot.

Still, the game is interesting and challenging and we've had several very tense scenarios where we were on the brink of disaster before pulling out the win. Character progression is slow which which makes even small improvements exciting to obtain. The game is comparable to Castle Ravenloft in complexity but has no spatial / tactical elements but brings more emphasis on long-term character development and progressing through increasingly challenging scenarios.

Julie made some sort of resolution to play more games this year and I am the willing and gracious benefactor. I don't know how Jaipur never entered my radar when it was released, but I heard a few mentions of it on The Dice Tower and started checking local stores to see if I could find it. We scored a copy at Powell's and have greatly enjoyed it. Interestingly, Jaipur has a lot in common with the next two games. All three are set collection and trading games that involve hand limits and competition for scarce resources. Each one approaches it differently, with Jaipur being the simplest and quickest of the three.

Jambo has been in my collection for a long time but hasn't seen much play since it first came out. I've avoided selling or trading it because I had such fond memories playing it and I'm glad I kept it. Jambo is more involved than Jaipur or Morels but is also a buy and sell game with basic commodities. What makes Jambo deeper are the special cards that can lead to interesting combos and side effects.

This was a Valentine's day gift from Julie and it looks to be a fantastic game. The theme is harvesting and cooking wild mushrooms. We even enhanced our game with a couple miniature dollhouse frying pans! Morels uses a a card drafting mechanism where the cards at the front of the line (mushrooms "at your feet") are cheaper than those further away. There are multiple options on what to do in your turn to keep things interesting but not overwhelm, and the game plays very quickly (20 minutes on average I suspect). Really looking forward to playing this one some more.