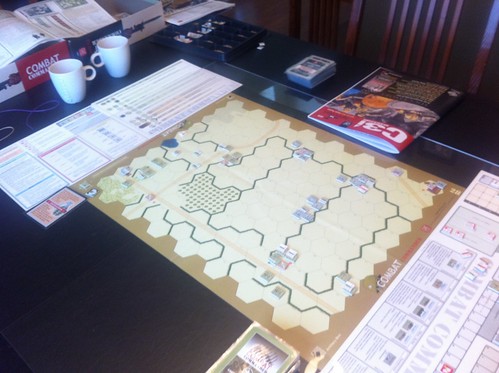 Matt and I met on Sunday to continue our Combat Commander: Europe Pathfinder campaign. As the loser of phase 1, the Germans (me) got to roll for an asset to help me catch up in phase 2. I rolled an average 7, resulting in Matt having to play the scenario with a discard limit of 2. Matt was then faced with a choice -- either he chooses the next scenario (one of three options), or defers the option to me and rolls for his own bonus asset. He elected to choose the scenario, settling on scenario 6 which focuses on combat in and around Sainte-Mère-Église. Interestingly, the Pathfinder campaign swaps out the map from one placed in the town to one taking place in the hedgerows outside the town. The custom rules for the scenario have the hedges providing more cover (2) and a higher movement cost (+2). These are your taller/thicker-than-average style hedgerows.

That doesn't mean there's a lot of cover for the defending Germans. To adequately deploy my squads in line with the 4 of 5 objectives I was initially controlling I was forced to leave several units exposed in open terrain with hedges cover 2 or 3 of the 6 hex sides. Matt adeptly deployed his attacking forces in a way that would give him nice direct fire options as he advanced. Which is exactly what he did, resulting me in losing 2 conscript squads and an objective within the first few hands.

Fortunately this scenario has the Germans in a defending posture; the first was reconnaissance. This matters because many of the German cards have special actions and triggers when on defense, allowing me to gradually entrench my forces into a much better defensive position. I held onto "dig in" cards and between the trenches and pillbox I think I gradually worked my way up to 5 or 6 different fortifications. This drastically slowed down the American advance and allowed me to gradually work my way back in victory points. I also drew two events that gave me a total of 4 VPs (2 times gaining a point each for the 2 objectives I still held onto).

I also lucked into a hidden unit placed behind his advancing line that was able to harass with mortar fire from the rear. I didn't take anyone out, but it definitely consumed attention from Matt.

Going into the possible sudden death ending I stood at +6 VPs with Matt holding onto two secret objective chits. I had reason to be concerned because Matt didn't seem terribly anxious to advance - is he already holding onto enough VPs to win the game? He also held onto the tie-breaking initiative card.

We didn't see a sudden death ending on turn 6. On turn 7 Matt turned his forces against my lowly weapon squad with the mortar. Could it be he was desperate for another VP or 2? I fortunately drew a couple of advance cards allowing me to push him back into a building over two hand draws and was able to keep him safe. Another time trigger hit and we drew a sudden death ending; as the defender I gained a single VP for surviving another turn. Matt flipped his secret VP chits over and gained 6 VPs for the objectives he held, moving it to +1 for me. The Germans won this time.

Matt holds a VP margin of 10 points right now, but it won't matter as the campaign rules dictate that if a player wins phase 2 and 3 they win the game. So the campaign victory will come down to the winner of the final phase.