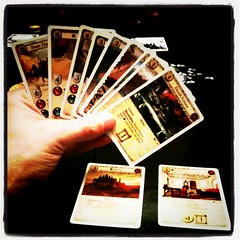 Given that I'm diving deep into the Game of Thrones Living Card Game (LCG) from Fantasy Flight Games (FFG) I thought others might benefit from a detailed discussion of how I'm ramping up on learning the game and acquiring cards to expand my deck-building options.

While the game is relatively easy to play out of the core set box, it took 3-4 games before I felt like I had a handle on the subtleties. I've been playing Magic: the Gathering for over 16 years now and that is the framework I use to learn games like this. As a result I make assumptions about when cards can be played, how characters can be saved, and a wide range of timing considerations. Turns out many of those assumptions turn out to be flat wrong, which is mostly a good thing as the timing framework for GoT is much more constrained and rigid than Magic.

Here are the resources I used to ramp up (roughly in order). Realize that there's no substitute for playing the game and looping back to these resources to check out questions and possible gaps in understanding.

Get out your credit card! The positive side of the transition away from the randomized collectible format to the fixed "living" format is that you can strategically pick and choose what you want to acquire to expand your deck building options. No need to buy a box of boosters in the hope that you get three copies of a particular rare card (accumulating 15 copies of a common along the way). The flip side of this is that the predictability may in the end contribute to a higher spend for the casual (non-tournament) gamer. I suspect this is what Fantasy Flight is counting on.

There are three different packages of cards provided with the LCG:

So what did I buy to get started? Maybe more than I should have, but here's the list:

Did I mention that I'm still a newbie? My recommendation for getting started is to ready the legacy CCG getting started guide from FFG. It covers some basic principles for deck composition that will help you evolve from using the pre-packaged decks to your own constructs.

That's all I can help with now. Ask me again in a month or two after vie explored more.

One of my favorite Magic tournament formats was the booster draft. Given the non-random packaging of the LCG this isn't really a viable structure, but I won't let that stop me. The legacy CCG cards by and large work just fine with the LCG cards (though probably not for tournament play). You can find very inexpensive boxes of boosters online, and I bought a few and will try this format over the weekend.

The contents of the supplemented draft pack was:

I have a box of these booster draft packs in transit, but I'll be simulating packs for the weekend using existing cards I have. More to come soon after I try this out.