On Saturday KC, Jacob and I played the classic card-driven game Napoleonic Wars. KC was interested in something longer and deeper and when he opened the door to maybe playing a multi-player wargame I had to jump at the chance. 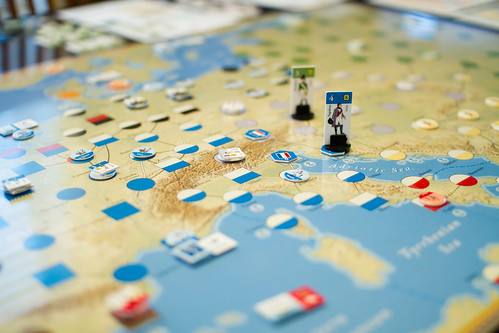 KC played the Brits, Jacob the Russians / Austrians, and I was the French. This was my third play of the game. The first time was a two player game vs Jacob where he played the French and won after I gambled on peace after the first turn. The second time was at Doug's WBC-West where I played the Brits (again) but had a three turn game. 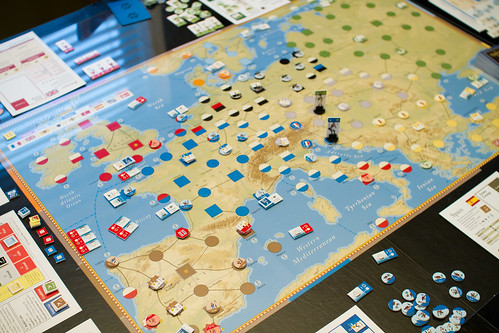 It was slow crawling at first as I taught KC and we all got (re-)acquainted with the system. I had a robust march into eastern Europe and the Adriatic with Napoleon, but Jacob made the right moves and got Kutuzov there quickly to provide the necessary support to Austrians before I could quickly wipe them off the map. Still, I was ahead by several points at the end of the turn, and give up a card to swing the peace roll in my favor. This forced Jacob and KC to play a bit of chicken with each other and they ended up chancing it on a D6, and once again the French prevailed with a 6 roll. This was just fine by all of us as Jacob had to work on his health project video which allowed KC and I to dive into A Game of Thrones LCG.