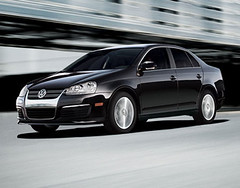 We bought a new 2010 Volkswagen Jetta TDI on Oct 31 2010. It is my primary commuting car and I couldn't be happier. It has more-than-adequate iPhone integration, Bluetooth with voice dialing (the car Bluetooth system has its own training and voice recognition - it doesn't use the iPhone's), and I consistently get 40 MPG even on commutes to and from work with some traffic. On a trip out to the Oregon coast in November, Jacob was able to squeeze out 45 MPG average for the 75 mile trip. Jacob is now the regular driver of our 13 year old Durango (he pays for the gas, hah hah) and Julie drives the 2001 Toyota RAV4.

Diesel fuel prices are high and getting higher. I was a bit worried that despite the significantly increased fuel efficiency (we essentially swapped the Jetta in for the Durango), the high cost of diesel would offset any other savings. I need not worry as the following chart shows. 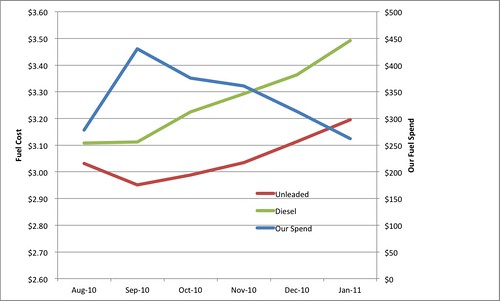 The first three months in the chart are before the Jetta, the last three months after. August was unusually low because we spent the first 8 days of the month in western NY with a rental car and minimal driving - probably 160 miles total. The trend is clear - despite the increasing cost of fuel, our monthly total spend is going down. I suppose a Prius would do marginally better, but I suspect we saved about $10k on the purchase price and I love the performance and comfort of the Jetta.