Last weekend I helped host a regional Chess for Success tournament at Sherwood Middle School. With a very strong 6th grade class joining our club of about 40 members I liked our chances of qualifying for the state tournament. The team is comprised of up to 10 players and the tournament is a swiss style individual team tournament. This means that each player is competing as an individual over 5 rounds of play, trying to accumulate as many points as possible (1 for a win, 0.5 for a draw), and will generally not play someone from their own team. Swiss style means that a player is paired with another player with approximately the same score each round - the better you do, the more difficult the tournament becomes. Both Matthew (6th grade) and Jacob (8th grade) qualified for the team. 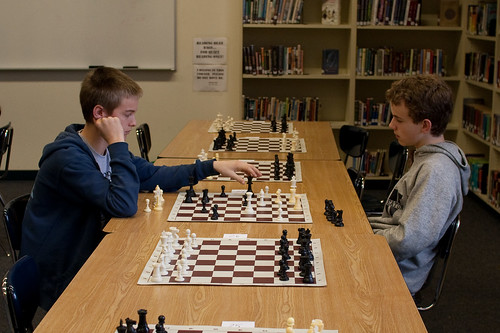 We had a great first round with 8 out 10 players getting wins. This put us in a tie for first place as only the top 4 individual scores are counted and it is fairly routine for many teams to accumulate the maximum four points in the initial round. The second round was brutal - of the 8 players that won in the initial round, only 2 managed a win in the second. This put us at 6 points and we dropped to 5th place.

The team regrouped and played strongly the next two rounds, accumulating 3 or 4 points in each round to put us in second place going into the final round. The top 2 teams qualify for state so we were carefully watching the point spread between us and third place (1.5 points). This was also the spread between us and the first place team.

We had 6 players with 3 points after 4 rounds (this means they had won 3 out of 4 games). I've coached teams in tournaments like this about 15 times and getting even 2 team points in a final round like this can be tough. The kids were well aware of the point situation and eagerly awaited each player as they exited the tournament room so that they could tabulate results. 3 out of the 6 quickly got their wins, giving us 3 points and a guaranteed second place. Matthew was one of the final remaining players going for his 4th point and was well ahead, getting to a queen/pawn vs no pieces against his opponent - generally an easy win. Unfortunately he rushed things and fell into a stalemate trap. Still, that gave us 3.5 additional points and, by our calculations, a tournament victory. 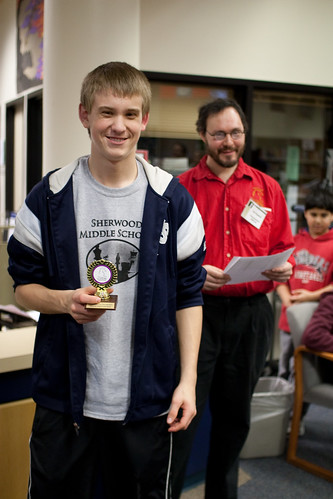 It was a great team effort with three of our players finishing in second place in the individual category, and everyone pulling strongly for the team. We compete in the state championship in March in a true "team" tournament - 4 players competing against 4 from the opposing team. 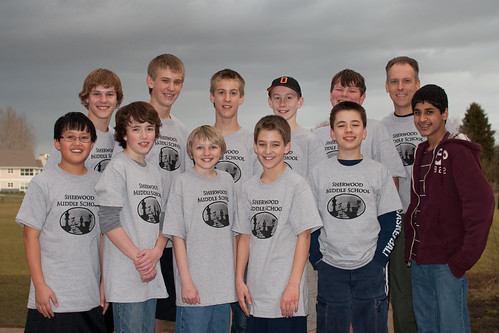