Time to catch up on some recent gaming. As you may have read in Mike's blog, we had a very wacky game of 1850 a few weeks ago. Not knowing the exact number of players that would be playing, we opted for a (likely) five-player game of 1850, an 18xx game set in the midwest. Matt had a trip cancelled so joined us as well, bringing the total to six. An ideal number for an 18xx game? I think not... 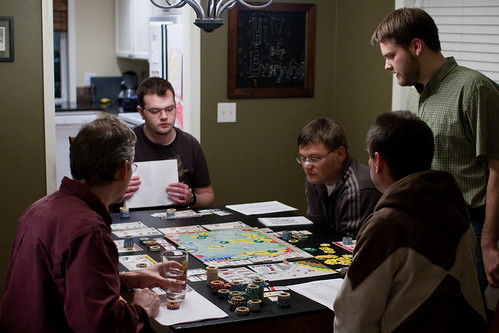 Continuing my tradition of being unable to play a game of any reasonable complexity properly by the rules, we messed up the certificate limit rules in this game. While Mike will claim that this was the primary reason for the game being wacky, I think it was a contributor but not the key. The key to me was the large number of players and the need to cooperate on initial capital investments to get the game rolling. My recollection is that for the first few turns we were stalled because of lack of money in the companies, not because people hit their share limits. We were only off by one on the cert limit rule, though in a few cases it definitely hindered the start of companies or caused some dumping to occur that may not have otherwise. Lesson for me: stick to 3 or 4 player 18xx games.

I hosted our group gaming session last week and we brought out the Wallace classic Volldampf. The game holds up well even in light of successors like Age of Steam and Steel Driver, though the randomness of goods generation is a turnoff for some. JD played very insightfully for a first play - he didn't get suckered into the turn order bid and focused on leaching off of other's routes. The game was fairly close throughout but JD managed to get and maintain a sizeable enough lead to give him the win. 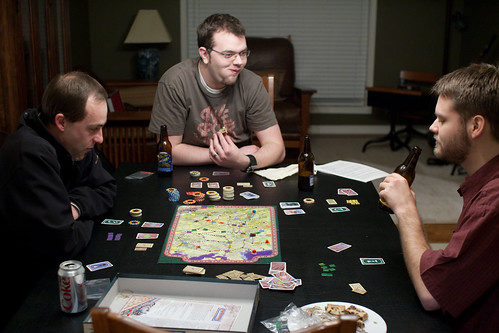 The Days of Wonder announcement about their new game Smallworld, a re-envisioning of Phillipe Keyaerts' Vinci encouraged me to get this out with the boys over the weekend. This is a Risk-style conquer and control-the-world style game with a very light combat system with specialized civilizations. Because each civilization begins with a fixed pool of assets (pawns for conquering), the lifecycle of a civilization is constrained and one of the key player decisions that recurs throughout the game is when to go into decline and start a new civ. 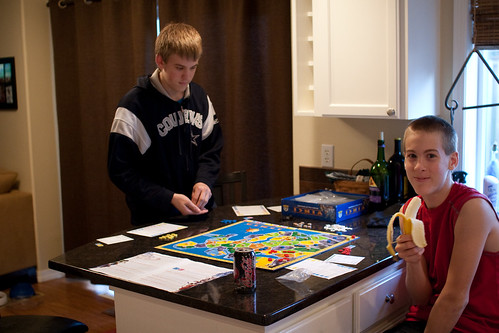 Jacob got off to an early lead but stalled out as he approached the 100 point mark, with Matthew gradually catching up to him. I had a good mid-game (including a civ that allowed me to decline at the end of my turn rather than beginning) and Jacob and Matthew probably weren't aggressive enough at attacking the leader. Always more fun to attack the brother, right? Great game, played in under 2 hours.