Despite the lack of blogging on my part, games have been played and enjoyed recently. Let's start with the winter holidays.

We spent the holidays around Christmas in Las Vegas with the grandparents and had plenty of fun playing poker, bridge, and... Verräter! This was my first time playing my personal copy - I played it one time before with Mark Johnson at the first BGG.CON. As others have said before, there's a lot of game inside this tiny box and I hope to see it played more. 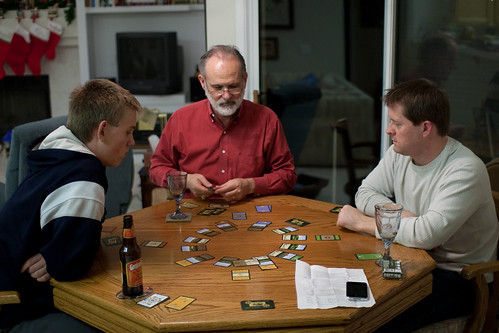 The boys were on a Monopoly kick while there and I felt obliged to join them for a couple of sessions. They played by the "real rules" - auctions for un-purchased properties and no free parking windfalls. As a results the games played were fairly well bound in time though it clearly still suffers from a runaway leader problem. Low-light for me: Jacob trading away a property to Uncle Mike that allowed him to get an immediate monopoly and only getting a single railroad in return. The nerve! I'm sure they were colluding against Matthew and me. 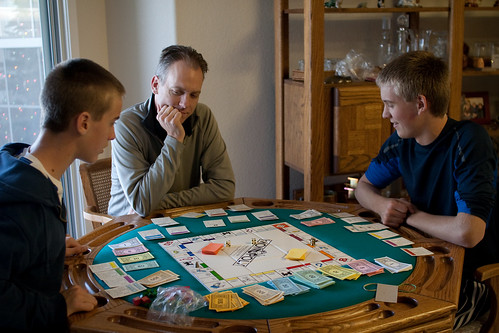 Over the New Years weekend we played a family game of Battlestar Galactica, the exciting new cooperative game from Fantasy Flight. I'm really enjoying the game but it is long enough to be a daunting task to get out with the family. Jacob turned out to be our sole Cylon and was frustrated with his inability to really hurt the good guys - he learned that in this case it would probably have been best to reveal himself earlier.

Jacob and I played a shortened game of Warriors of God - shortened because I resigned in turn 3 as I had no hope of coming back as the French. The ghost of Mike Deans must have been present as I rolled over 50 consecutive dice without seeing a single 6 - this poor luck resulted in an incredible poor second turn for me and put me so far out of things that recovery was near impossible. It was nice to play and get a handle on the core mechanisms - this is a decent game that we hope to try again soon. The French seem very underpowered but I'm sure that's because I don't fully grasp how to play them effectively. I likely should have been more deliberate about avoiding battle and offering siege (in fact, when he stormed Paris I even forgot that was an option). 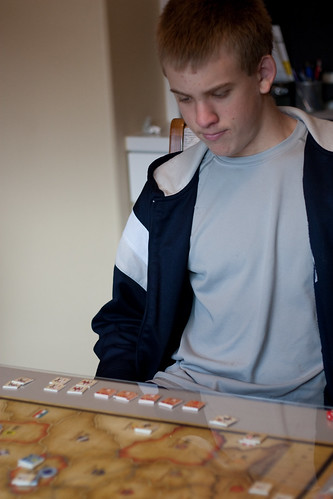 A couple of weeks ago I went to Doug's to play a repeat game of Indonesia - let's play by the correct rules this time, darn it! Almost, but not quite - we made a crucial error and allowed a siap faji merger in the first era - a devastating mistake as it stunts city growth in the opening and limits options later in the game (my opinion, also shared by Mike I think). Maybe we'll give ourselves another shot soon to get this one done properly - it truly is a fine game when played correctly. 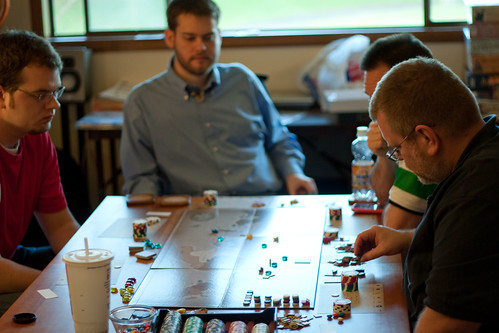 I hosted our weekly Tuesday night gaming earlier this month and we played Tinner's Trail and Die Sieben Siegel. Only my second play of Tinner's Trail and it revealed quite a bit more depth this time around. The auctions for mining rights were much higher in this game than in my first "friendly" game - amazing how valuation approaches can drastically alter a game's feel and limit capital. Die Sieben Siegel was as perfect as ever - easily one of my all-time favorite card games.

Finally, Jacob and I started in on Command & Colors: Ancients and the related expansions. We only played one scenario but were reminded of how much we enjoy the game and we've committed to working through as many scenarios in expansions 1, 2, and 3 as we can in the coming year.