Ahh, finally, another chance to try Agricola. Mike sprung a nice surprise on us yesterday, letting us know he had a copy of Agricola and had spent the weekend handling the English paste-ups. He also ambitiously scheduled it for a Tuesday night gaming session, and even had the nerve to suggest that we might get two games in (we had 7 people interested in playing the game). 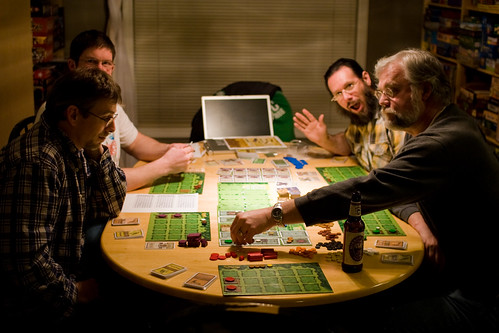 This is understandable as the rules make the game seem simple, almost deceptively so. Truth is, that's part of the appeal of the game - the core mechanics are simple and easily grasped, while the ways in which you can achieve your objectives can be very difficult to discover. Especially with all those other players getting in the way.

My goal in this game was to do a decent job of teaching (Mike did a great job assisting, especially for having just read the rules) and improve my score by about 10 points over the last (and first) time I played. I must have failed in the first task miserably, because Carey proceeded to forget just about every scoring rule I discussed at the start and ended up with 12 points (sorry Carey). I'll take the fall on that one. I think my final score was about 33 or so, so I improved but not by as much as I'd hoped. Matt had a great first game, scoring 37 points and really getting his engine running quickly.

This is clearly a game I want to explore more and we'll likely play it again next Tuesday. Maybe someone will have it down in Eugene this weekend?