Two weeks ago I journeyed down to Eugene with KC and Rita (and back with Doug) for Lorna's Eugene Games Gala. This is a small weekend event held at a hotel in Eugene with a total of about 40-50 attendees. I posted a ton of pictures over on Flickr. 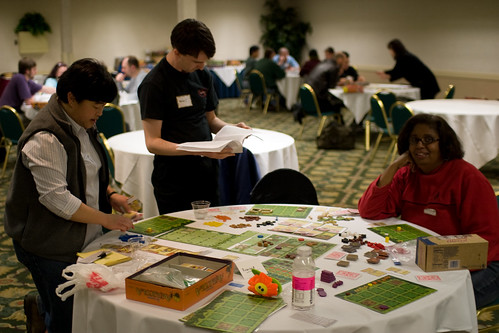 I managed to place a nice range of games over the weekend: Race for the Galaxy multiple times, In the Year of the Dragon, Blue Moon City, Tichu, Phoenicia, Kingsburg, and more. The one "big" game played over the weekend was Here I Stand, an 8 hour affair in which we only made it through about half of a real game. It was a learning game for a few of us and while it was enjoyable from an experience and thematic perspective, it was slow and probably not something I'm going to ask for very often. 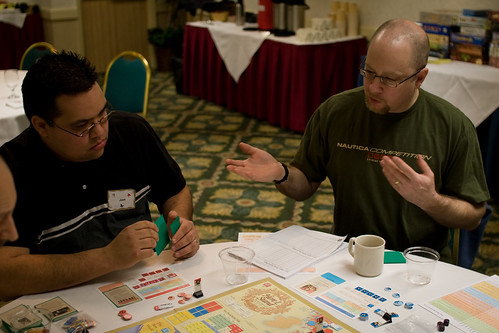 I played the Ottomans which kept my options fairly simple - capture Hungary as soon as possible and start harassing the other powers with my pirates. Without having to worry about religion, exploration, or much in the way of diplomacy, it felt like playing Hannibal where I got to wait about an hour between turns. 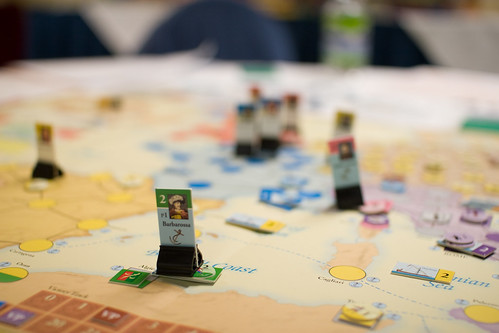 When we decided to wrap up the game at about 5pm there were a few of us in contention, but it was looking like the Pope was going to win. The poor Protestants had a terrible series of dice rolls which hampered his efforts at conversion. I wonder how good the game is with 3 players - maybe it is unbalanced, but at least each player would be more engaged with less downtime.

Thanks Lorna for a great event!