As promised I played a three-player game of the new Martin Wallace release Brass today. Randy and his son Byron joined me - a first chance to meet these new members of our game group and enjoy a game with them. We had a blast and I'm happy to report that this a solid medium-weight game from Wallace.

I spent some time researching the game on BGG before playing and noticed no shortage of consternation about the quality of the rules. I don't think the rules are written poorly, but this is not a trivial game to understand so it is worth taking some time to explore the rules forums for explanations and clarifications. I found the Important Concepts post in particular to be quite helpful.

This game is about economic development, connection-building, and (of course) resource management. Like many Wallace games, cash is tight and a little bit of planning can help avoid wasted turn and potentially disastrous consequences. 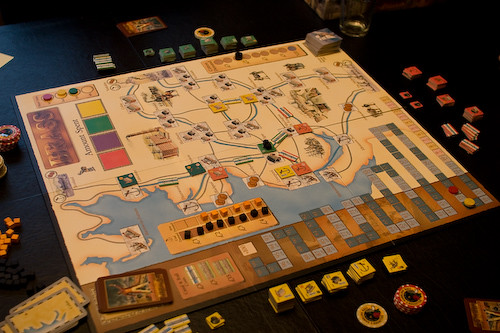 The most complicated part of the game is the set of rules governing how to build industry counters (where you can build them, what resources are required). Most people will need to read the rules, play a few turns (real or practice), then re-read the rules to figure this all out. We eased our way into the game, which starts in the canal phase, knowing that our initial options would be limited and we would be unlikely to screw things up too badly. The game flows pretty easily at the beginning if you follow Martin's advice at the end of the rulebook for playing the game, so I encourage first-time players without a teacher to just dive in and play after a pass through the rules.

The basic idea of the game is to build industry counters that will get utilized and thus generate income and victory points. Income early in the game is certainly key and the main way to achieve this is by taking at least 3 actions - build a cotton mill, build a port, sell the cotton through the port. When you execute the sell cotton action you get to flip the mill and port over, moving you up the income track and setting you up for VPs at the end of the canal period. This is quite a simplification as there are rules for connecting towns, being able to transport cotton to the port via connections, and playing cards to execute the various actions at your disposal. 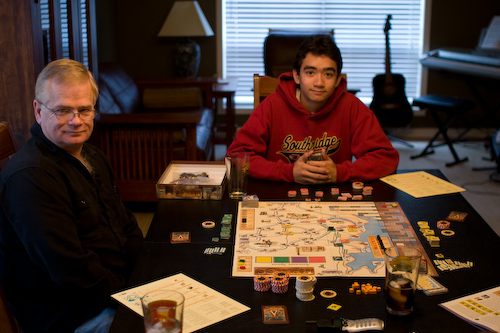 At the end of the canal period things were tight - Randy - 43, Byron - 39, and Chris - 37. None of us really knew what to suspect with the transition to the rail period (the final half of the game). All of the canals are wiped off the board as are all "level 1" industry counters. It is worth noting now that there are only five different kinds of industry counters (Cotton Mill, Coal Mine, Iron Forge, Port, and Shipyard), but each industry has different levels of development that advance throughout the game. So the board is almost reset at this point, with each player having about 2 or 3 counters left on the board and no rail connections between towns.

This is where we made our big mistake - coal is critical at the start of this period as it is required to build rail connections. Sourcing the coal can be a challenge, and nobody had a coal mine on board and there were almost no port connections available. I made a mistake in telling and executing the rules here, taking coal from an off-board supply when I wasn't allowed to. This mistake forced us to back up a complete turn and right things, which we were able to do but not without some pain and confusion. My suggestion: use the natural break between periods to review the rules on rail building and any special rules that only apply to the rail period!

I was very impressed with how quickly Randy and Byron picked up the nuances of the game and we had three very different strategies at play. While both Randy and Byron focused on building shipyards, I was unable to do so but blocked access the the potential third shipyard location. I focused on cotton and iron production and Byron built a large number of lucrative rail lines. In the end we were amazed with the closeness in scores: Byron won with 140, Randy and I tied at 138. As you can imagine, the tension was very high as we counted the final scores (with Byron's counted last).

The game took us 3.5 hours to play, but it feels like a 3 hour game to me. I guess you can probably play it in 2 hours with experienced players, but how often does it happen that all players are experienced?

I'll try to play this again at BGG.CON, and perhaps my experience playing will come in handy to teach others that will be excited to try this new release.