I used a pretty heavy hand with Jacob last weekend in an attempt to get him to try out an 18xx game with me. After witnessing my marathon game of 1825 at GameStorm he was convinced this was a game he would not like and that would be way too long. I did my homework with my local group of resident 18xx experts and settled on 1889 as a nice intro 2-player game that could show him the true light of the 18xx gaming world. Eric was nice enough to loan me his copy, another high-quality production from Deep Thought Games.

1889 takes place on Shikoku Island in Japan. Plenty of challenging terrain, but a small board size and simplified rules made it perfect for a first game with Jacob. 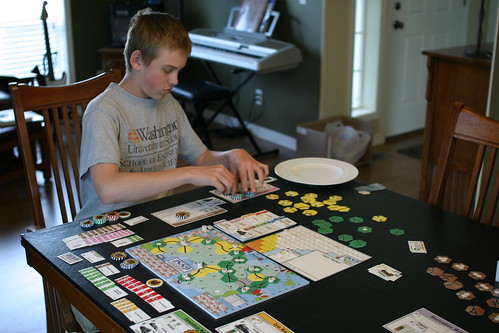 The game was very easy to teach despite this being the first game I've played without a more experienced player at the table. Other than some of the quirky rules around laying tiles, I think the game system just makes sense if you have a basic understand of markets, banking, and business. And if you don't know those basic concepts, what a great way to learn them. Jacob caught on very quickly to the basics and even started to see some of the benefits of "synergistic" operation of his two companies. With only two players involved there wasn't a significant amount of cross-company benefit. Of course we also played a few rules wrong - significant rules that altered the course of the game but in the end didn't matter in terms of enjoyment and desire to play again.

What did we screw up? 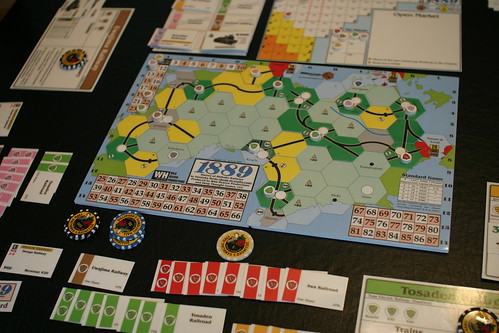 This caused some companies to be fully sold out when they probably would have stayed with a few shares in the bank, pushing their stock up artificially. Maybe it was a net no-effect on the two players, but it was still a pretty big mistake that we'll fix next time.

Speaking of which, there will definitely be a next time for Jacob as he loved the game and has brought it up a few times since we played. I'm going to buy 18FL as I think it is similar scale with more familiar terrain and he's looking forward to getting into another game soon.