I decided to turn this post into a tutorial as well as a report on running a Kniziathon. I suppose the idea could be transferable to any game designer with a significant library of games (Moonathon, Teuberathon, etc.), but it certainly helps having not on a large number of games in the collection but a wide range of lengths and depths of games.

The first thing you need to do if running a Kniziathon is to check out Kevin Jacklin's Kniziathon guide over at the Convivium. This is where I learned everything I needed to know, and we were lucky enough to have Kevin in town to provide some friendly guidance along the way.

Most of my preparation work involved preparing materials to provide on-site as well as for publication online and in the GameStorm program. I'm including these materials online, so feel free to copy / revise /extend as you see fit.

I thought it was important to have an HQ area - somewhere to learn more about the Kniziathon, turn in scoresheets, and look for pickup games. Jacob and I set this area up early on Friday morning, including a set of about 25 Knizia games from my personal collection. I took a risk and allowed folks to use my games for pickup sessions without any sort of formal checkout process. I put mailing return address labels in each box and didn't have any wander away. Hopefully they are all still complete! 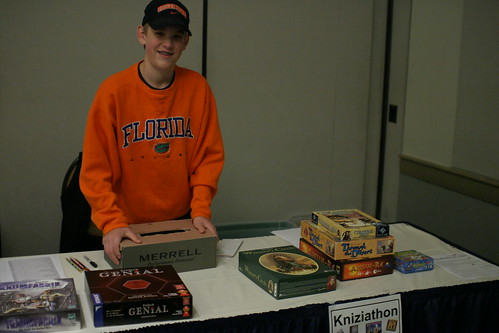 I recruited a set of willing volunteers to man the HQ with me from 8am - midnight on Friday and 8am to 4pm on Saturday. Despite several no-shows, this worked out fine and people were able to get the information they needed, play ad-hoc games, and turn in scoresheets with or without my personal presence. Having Kevin around to teach and play games certainly helped. 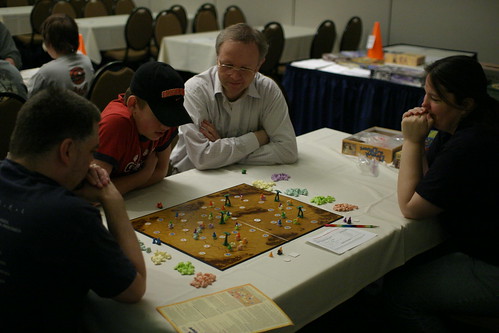 KC and I ran the two-player all-Knizia tournament Friday night - a great way to increase participation in both the tournament and Kniziathon. Having 20 participants over 3 rounds produced around 25-30 scoresheets. After the tournament it was time for tabulation of the first day's results, a process that took about 3-4 hours and kept me up until 2am Saturday morning. I used a custom database implemented in DabbleDB which made the process mostly easier - I say mostly, because the responsiveness of a web-based application can sometimes slow down the rapid data entry process I'm comfortable with. Still, the app made tabulation and final scoring a snap. 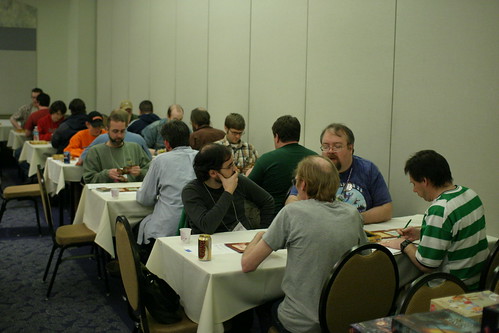 Saturday was much easier - not as many scoresheet turn-ins, plus most of the players were already in the system so data entry only involved entering game scores and not new players. Final tabulation took place from about 3:30pm to 4:30pm, giving me plenty of time to prepare for the awards ceremony with Reiner. 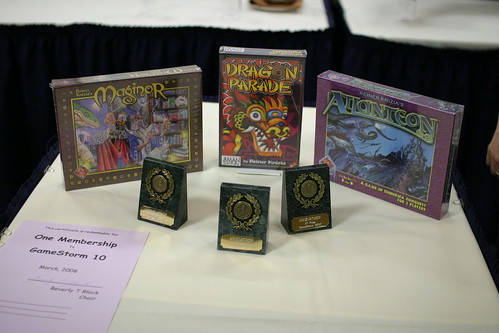 GameStorm donated a 2008 registration, Maginor, Atlanteon, and Dragon Parade. Reiner and Kevin showed up with three nicely designed trophies. We didn't have a prize or trophy explicitly for the youth winner (my own Jacob!), so it was nice having four available so that Jacob could choose first. He chose Dragon parade. It was a huge highlight for him to shake hands with Reiner and get a dollar bill signed by him. The dollar bill was handed out to the players that tied for fourth overall after I said they "didn't finish in the money" - Reiner quickly interrupted, reached into his wallet, and handed each player a dollar bill that he proceeded to autograph. 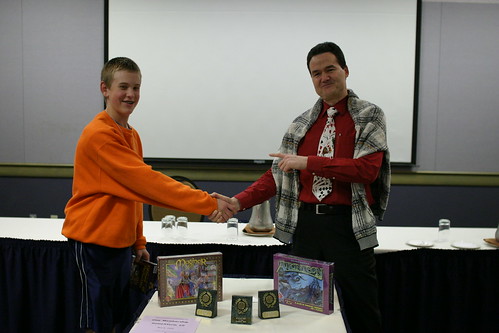 The winners were Tim Shippert, Tom Powers, and Zontziry Johnson (results are also posted over at the Convivium). I was proud to be a part of this event. Thanks to all of the volunteers that helped me out: KC, Ken, Doug, Jacob, George, Mike, Kevin, the GameStorm staff, and of course Reiner Knizia. 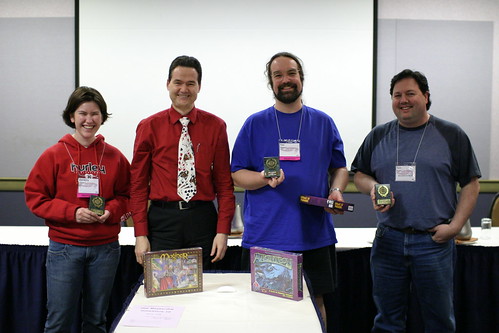