Julie and I started the Game On! class this week at Matthew's school (read more here and here). We ended up doing two classes to accomodate the 40 kids that signed up. The Wednesday class is mostly 3rd/4th graders and the Thursday class is 4th/5th graders. Julie will usually teach Wed and I'll take Thu, though with my travel schedule we will often flip things around.

Julie and I tag-teamed our first class on Wednesday. We started with an overview of the class, discussed rules and guidelines, mentioned a few of the games we expect to play, then dove right into explanation of our first game: Walk the Dogs. 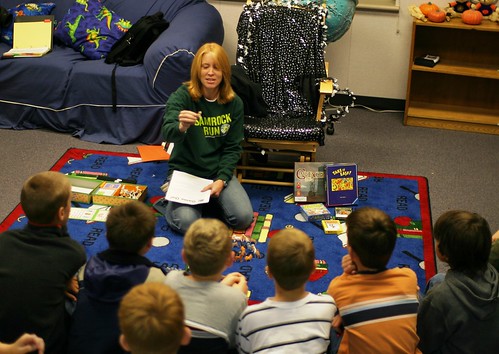 This turned out to be a great choice. Julie had the great idea of having the kids rate the games on a 4-point scale (we are using Chuck's system) and most rated it a 4 with just a few giving it a 3. Same results on Thursday. 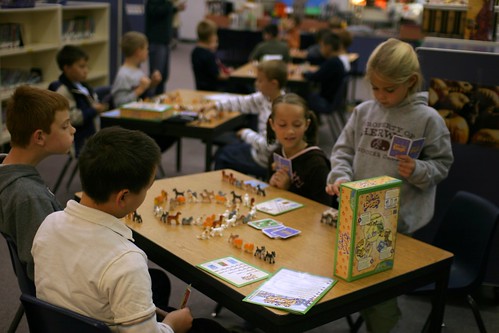 All but one of the groups in the 2 days were able to finish their games. Turns out the setup time for Walk the Dogs is longer than I remembered, so on the second day I took the time to set up the doggies ahead of time. That is part of the fun of the game, but I figured it was a reasonable tradeoff to give the kids a better chance of finishing.

Next week we will likely play Pickomino, followed by Take it Easy. After that we'll revisit all three games and give the kids the chance to pick one of them for play during an open gaming session.