This year I'd like to give a bit more information about the games I saw and played while at Essen. I'll do another post where I talk some more about the Sunriver Games booth, but this one will just be focused on the games. Most of you know it isn't my style to go into depth on any one game, so this post will give broad strokes across a wide range of games. 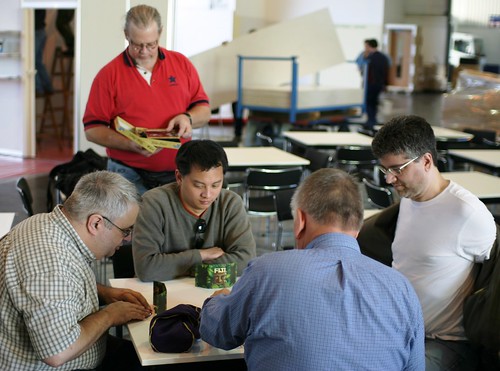 This was the first game I saw played at the fair while stopping in on Tuesday to hopefully get started on booth setup. This is one of the latest 2F games and I never got a chance to play it. The main reason: I heard it was almost a pure blind bidding game and one friend indicated that she would rather play a simple roll and move game than this one given the chaos involved. Maybe there's more there than I think, but this is one you should most certainly try before you buy. 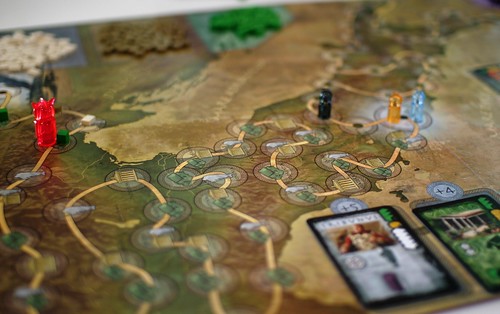 Another game I watched folks play (including Valerie Putnam and Lorna Wong - not sure who the other chap was). This is the collaborative release from James Ernest and Mike Selinker and it is essentially a racing game with players trying to race to one end of the board while the goths race towards Rome. Players have equivalent decks of cards in their hands that they use to produce certain resources that allow them to advance along the track, with the goth movement causing certain not-so-good things to happen to those resources. I hope I got that approximately right. This looks like one I'd like to try. 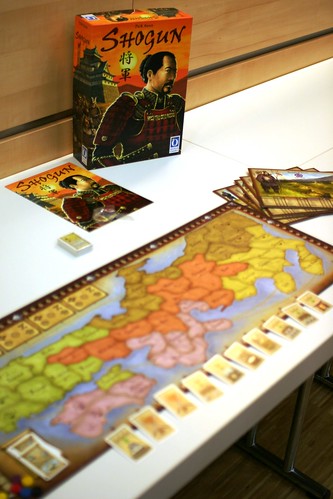 All of you Wallenstein fans know about this one - the Japanese themed version of the now classic multi-player Euro-style war game based in Germany during the 30 years war. Wallenstein has been out of print for a while so many folks who've had a chance to play it online at Mikael's spiel-by-web site have been anxiously awaiting this release. I picked up a copy in a trade with Queen games and I'm quite excited. Here are some differences from the original:

One interesting piece of information I got from Queen was that they are generally releasing three versions of every game: German with only German language box and instructions, International A aimed at the Americas with English, French, Spanish, and German, and International B aimed at central Europe with French, Italian, Dutch, and German. 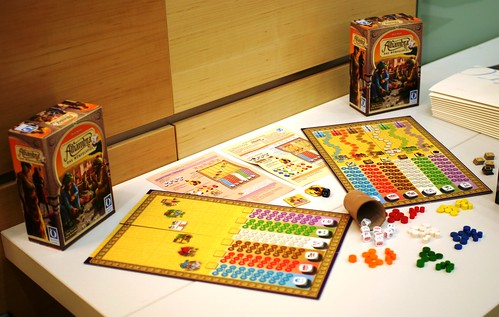 Given the wide range of games that are now branded in the Alhambra series we tried to convince Queen that "Alhambra the Numeric Domino Tile Laying Game" would be a good idea - not sure they bought it. The new dice game is one I also picked up in the trade it looks like a nice dice rolling game that blends some of the Yahtzee mechanics with scoring based on the building styles/colors in the original Alhambra game. 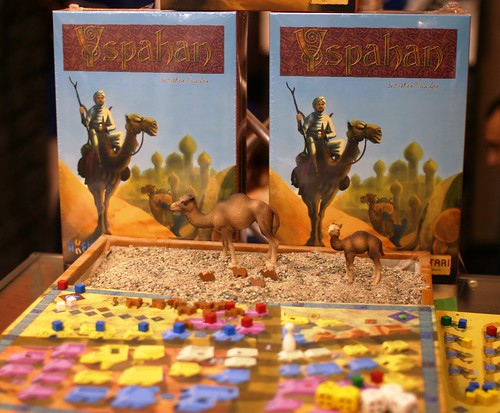 I still feel that I don't know much about this game other than it is much lighter and shorter than its predecessors from Ystari (Caylus, Ys). Jim Ginn quite liked it and I think he bought a copy. 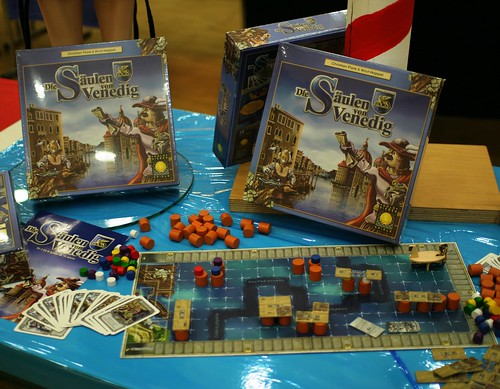 AKA the "other Saulen" game, I never got a chance to sit down and play or watch this new Gold Sieber release. The board makes it look fairly light but I could be wrong. Very attractive box and bits though.

The Thief of Bagdad 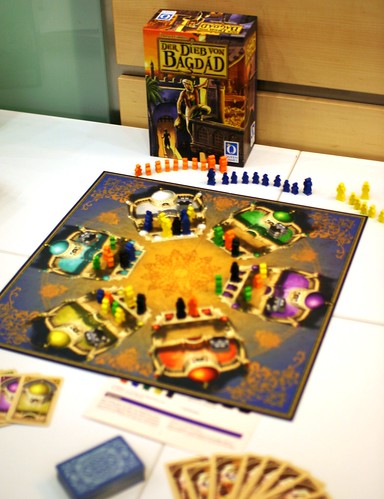 The final new Queen release, this is a multi-player game where players play both the thieves trying to steal from Sultans (?) and the guards trying to prevent the thieves from stealing. Clearly all sorts of room for bribery and corruption and I'm glad I picked up a copy - looks to be fun. 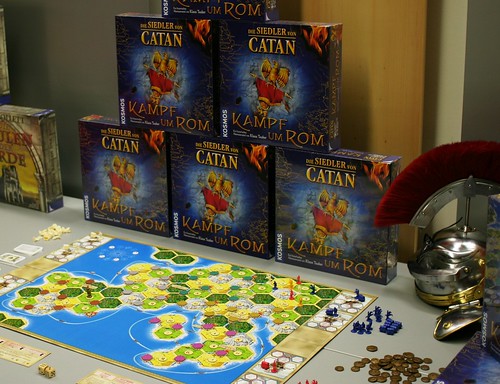 This is another Settlers game with a fixed board that appears to introduce a few new mechanics. Mayfair will have the English version in very early 2007. 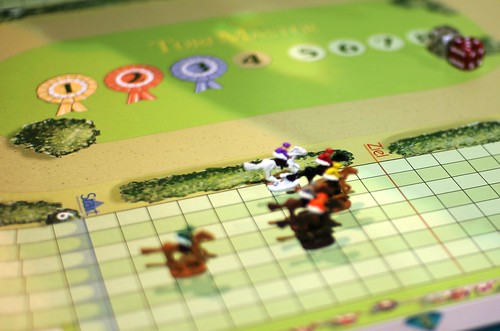 My single most expensive acquisition over the weekend at 69 euro, this was an easy decision to buy after checking the 'geek and playing a game at their booth. The component quality is amazing - painted horses, plastic deck boxes, and a very attractive double-sided board. It also supports 2-8 players.

The game play is very tactical with just enough luck involved to keep things interesting. Each player starts with a shuffled 32-card deck with numbers up to 12 (I'm not sure of the distribution). A game is played over three races, with each player drawing 10 cards for each race. Because the decks are identical, luck of the draw should even out over the three races. The race is run by alternating moves where players play a card from their hand to move the indicated number of spaces followed by a move where one player rolls 2D6 to determine how all of the horses will move. The player who rolls gets to decide how the dice are used: he can use both dice or just one of the two. This responsibility rotates clockwise so a new player gets to choose each time.

The game really shines with the handicapping system whereby horses in the first three positions are limited in their maximum movement. This means that a hand of all high cards can be a hinderance, because when you play a card that is over your handicap limit you move zero spaces instead of the indicated number. This can be devastating towards the end of the race so hand management and planning is critical. Further, if the player rolling the dice chooses a combined die roll that is over the handicap limit, the handicapped horse only gets to move with one of the two dice.

There are also very interesting rules about lane changes and spacing that I won't get into, but the game is easy to learn and I expect it to be a lot of fun. 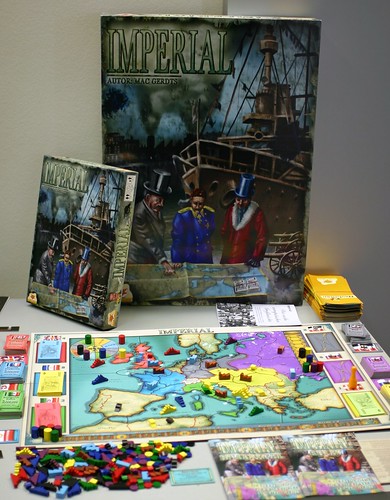 I thought this was going to be an automatic purchase for me but I decided to wait and see. This is the next game from Eggertspiele that uses the same rondel mechanic for action selection, but I've heard that that is where the similarities with Antike end. Interesting note: Matthias Catrein, our artist for Incan Gold, is also the artist for Imperial. 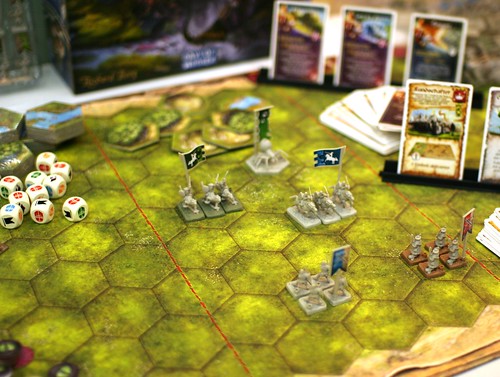 The game wasn't for sale but there were several demo copies at the Days of Wonder booth that saw heavy use. It looks as nice as you would expect it to look and I'm sure it will be a great hit. 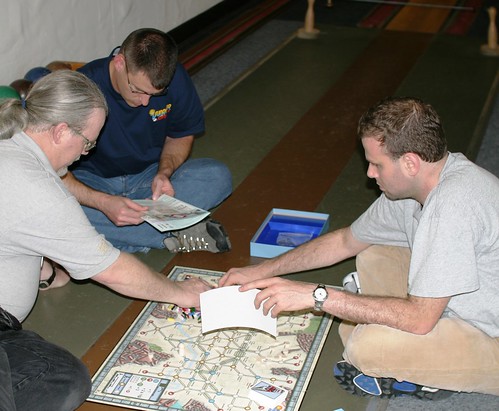 Another game I would have liked to have tried, but when Erik, Jim, and KC decided to play early in the week it was just too late for me to learn a new game and still be fresh enough for the morning. Matthias also did the art and graphical design for this game. The obvious comparisons were to Ticket to Ride, but there's enough different about the game to make it interesting. Jeez, the map of the London Underground is enough to keep me interested! I was also very impressed with the compact box for this game - this is a big board with nice bits all packed in a very small box. 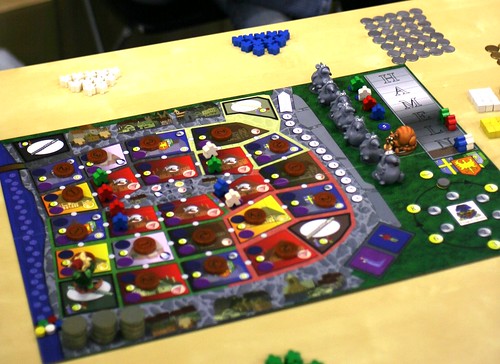 Didn't pre-order it, couldn't buy it, didn't play it. 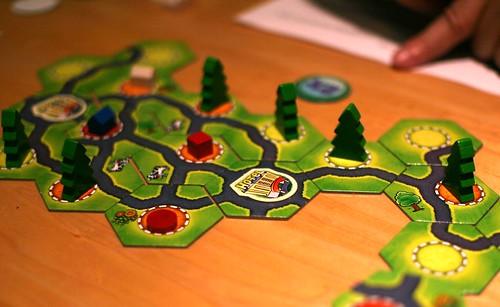 This Bambus Spiel release had a lot of promise when I watched Rick Soued, his son Alex, and Ned Medinger from Funagain play it. The game involves tile laying, structure building, and traveling along increasingly lengthier routes in the town based on an objective card each player holds.

The problem is this - the game has a bad arc as it gets increasingly more difficult to plan moves as the game goes on, increasing downtime and analysis required for each player. It just dragged on towards the end and didn't have a satisfactory resolution. There's something good inside this game but I think it needed some more development. 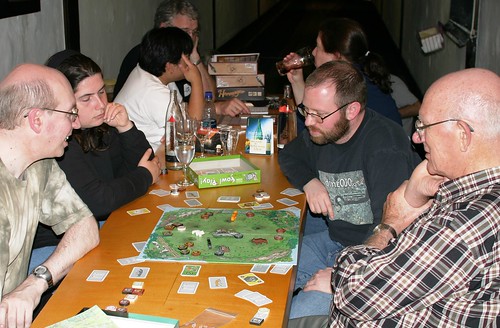 The new Richard Breese design had favorable comments but I didn't manage to learn much about the game. 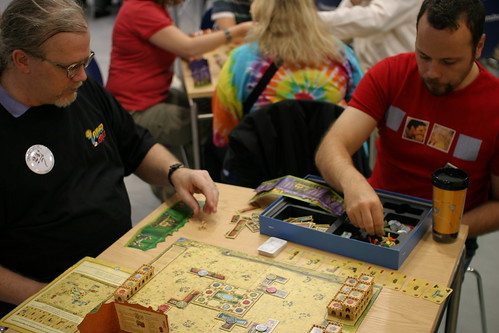 One of my top 2 games in Essen, I already wrote a more detailed description of the game earlier in the week. 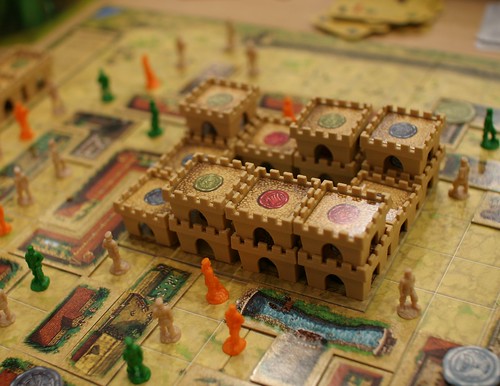 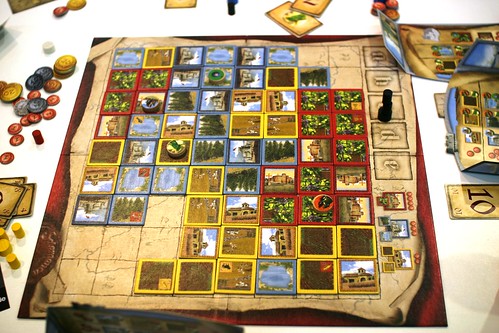 The driest of the bunch I played in Essen, I also wrote about this game earlier in the week. 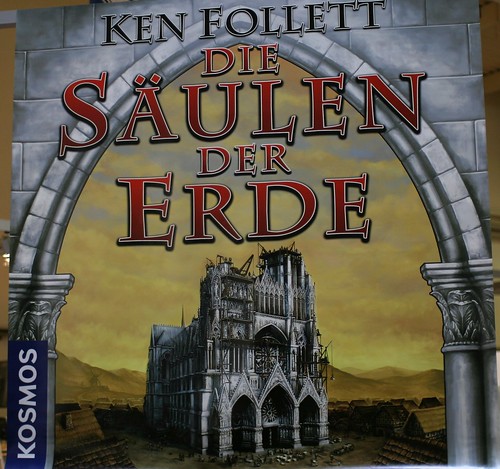 While I didn't see a full play of this game, I did watch Jim Ginn play for a turn and finished his game while he had to return to the booth to meet up with Ben. This game does have quite a bit of German text on cards, but they are always open so it is easy to discuss translations and recognition will be easy based on pictures and key words. 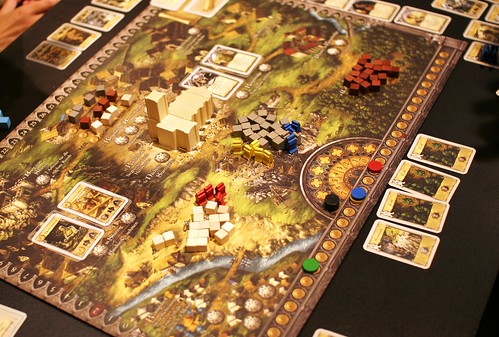 The basic mechanics of the game work like this (I just might get some of this wrong so be kind):

There are certainly some details and subtleties that I left out, but that's the basic idea. Yes there are some similarities to Caylus but this is different enough to warrant a try if you like that sort of game. There should be a Mayfair release of this Kosmos title in early 2007.