Saturday marked the end of Matthew's football season, the end of Jacob's regular season (they have a playoff game next weekend), and a chance for Jacob and I to try out a new Essen release: Through the Ages. This is another civ building game, but unlike many in the genre there's no map. This is essentially a card game that most reminded me of the 2005 release Parthenon: Rise of the Aegean. The map in Parthenon was largely superfluous, and I applaud the Czech Board Games folks for streamlining the game in this manner.

Through the Ages comes with three different play levels: simple, advanced, and full. The simple game is meant to introduce players to the basic mechanics with no direct conflict allowed between players. This is what Jacob and I tried on Saturday night, starting at 8pm and finishing before 10pm. Each player starts with a basic civ - despotism government, a couple of farms, a couple of mines, a lab, and a warrior. These are represented by cards plus workers (little yellow glass stones). In general, a card represents the capability of building something (i.e., the technology). The yellow stones represent population, so when a yellow stone is on a card that signifies that you've built that building and are manning it to bring some good to your civ.

What I think makes the game special are the civil event cards. These are brought out on a holding board and are purchased using civil actions. These cycle through the board and get cheaper as they slide left (think of the drafting mechanism in Atlantic Star), with the three left-most cards leaving the game each turn in the 2-player game. The cards allow players to customize their civ and choose their own path, including leadership, government, technologies, and production.

Our simple game felt like it was over almost before it started, and the designers should take this as a compliment. It really is an introductory scenario and it served us well in teaching the basic mechanics of the game, and I was thrilled that we were able to complete this in less than two hours including setup and instruction. We thought I had won, but in hindsight Jacob probably won as we miscounted some of the bonus points. 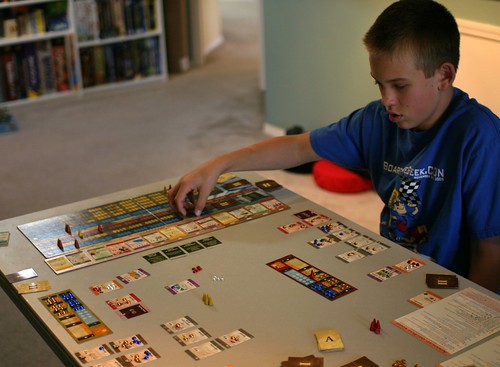 Jacob and I embarked on an advanced game this morning at 9am. The advanced game includes all of the rules of the full game minus the ability to declare war (though there is military conflict) but is played without the 3rd age cards.

There's a system of checks and balances at work in the game, not unlike Antiquity. You have to do some planning and forecasting to make sure that you keep enough resources (food and mined product) around to do the things you want to do, but not keep around too much. The advanced game introduces the notions of happiness and corruption which forces players to balance their development, keep their population happy (mostly by supplying religion), and not stockpile too much of their goods. It also forces a level of efficiency in production, as the finite number of resource counters can represent different numbers of raw goods depending on where they live. A token on a basic iron mine may be worth 1 resource, while the same token on a bronze mine is worth 2 resources. 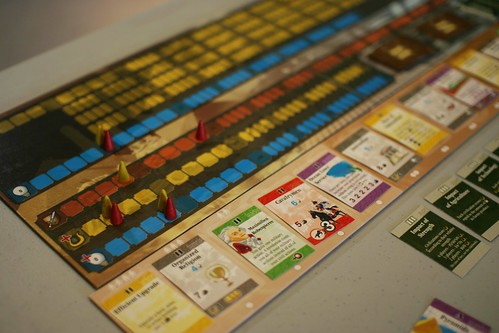 Jacob pulled ahead early in military strength which turned out to be a big advantage as the advanced game introduces military events, many of which benefit the player with the most strength (or hurt the player that is weakest). I clawed my way back, mostly through superior resource production, and was able to slingshot past him in the last turn in military strength. This gave me a 10 point bonus at the end which turned out to be the difference in the game. The bonus came from a set of 4 random 3rd age event cards that we flipped over at the start of the game which specify bonuses players can earn based on the state of their civs.

We completed the advanced game in just under three hours and had a blast. There's more interaction in the advanced game but this is still largely a do-your-own-thing sort of game. The downtime was minimal with 2 players, but I can see it getting excessive with more players. I do need to give the designers credit in specifying how to minimize downtime in the rules - they encourage the next player to start his turn once the current player completes his actions and starts end-of-turn production. We followed this guidance and found the time between turns to be no more than 5-10 minutes, sometimes even less. After 2 plays Jacob and I are rating this one a 9 and look forward to playing the full game.