Time for a quick update on my unplayed games burndown project. In my last update, I mentioned that I need to kick the playing and possibly the getting-rid-of into high gear. I think I did pretty well in August and September. 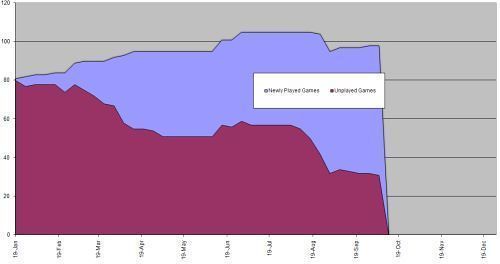 The top line (red plus the blue) shows the overall size of my game collection that has been unplayed at some point in the year. It dropped down significantly in August as I sold and donated a number of games. It bumped up a bit as I picked up a few games: Antiquity, Roads and Boats, and Canal Mania, but net I made good progress. I'm down to about 30 or so to play, so I should be in good shape by the end of the year. The key, though, is this: not buying games at Essen that I don't play at Essen!