Nearly a month ago I spent the better part of a Saturday over at Doug's to play the Splotter game Antiquity. Doug already did a great job of describing the session in detail, so I'll limit my commentary here to my impressions. 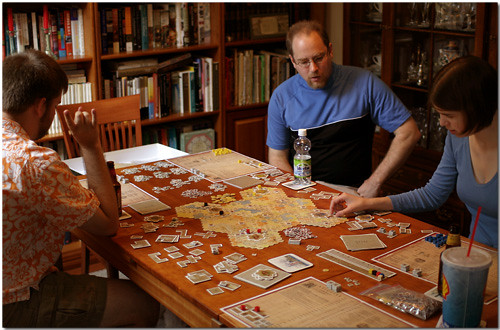 We started the game using the forgiving beginner rules - no polution, no famine. As a group we decided to kick it in around the 5th or 6th turn. In hindsight, it would have been better to start with those rules or not use them at all. We just weren't ready to handle it, and as we scrambled to prepare a few of us came precariously close to a death spiral. Much of my first town filled up with graves, though I built a second town in time to provide some space for new buildings. 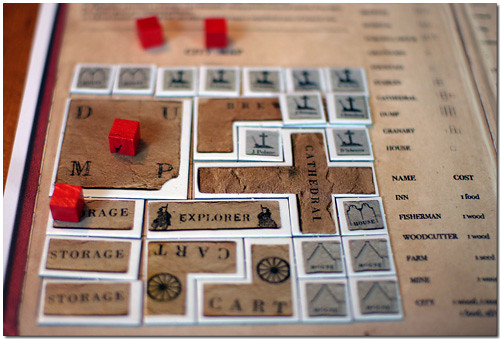 Down-time can be a problem with the game if the players aren't taking about the same time for each move. Even though much of the game can be played with parallel activity, I still found myself waiting quite a bit. No dig on the other players at all - it is a very thoughtful game! Still, I'm not sure a 3rd and 4th player adds much to the game, as you spend the first half in solitaire mode and the second half bumping into 1 or maybe 2 other players. I think the right way for me to play this game is with 2 players - it will play faster and will be just as enjoyable. 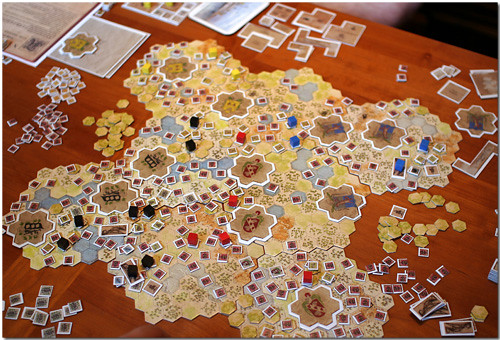 As it was, we didn't manage to finish the game as I had to get home for some guests that were having dinner with us. I felt liked I played the game enough to understand all the mechanics and look forward to trying it again, perhaps with Jacob or Ken. This is a pretty brutal game as far as planning and forecasting go - I compare it to predicting cashflow in a business. Matthew wouldn't be ready for it yet, but I think Jacob would enjoy it if he's in the right state of mind.