I recently picked up the Avalon Hill game Nexus Ops from Toys R Us (great deal - $19.99 with free shipping) and we all sat down to give it a try today. The game is meant to be a fast-moving build-your-units-and-attack style game and it certainly achieves this goal. Originally it was just going to be the three boys playing, but Jacob and Matthew managed to talk Julie into joining us. 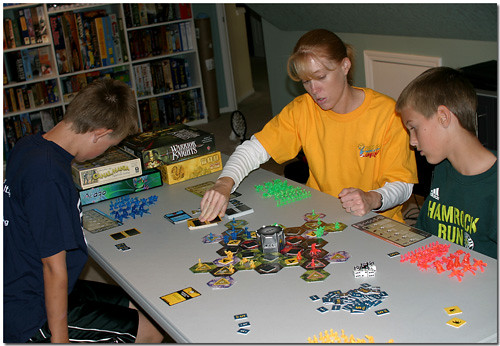 Each player starts with some money (Rubium), with early player advantage offset by a lower starting bankroll. On your turn you produce units, move them, flip over any discovered exploration tiles (which can be mines, new units, or both), resolve combat, receive income from mines, and finally draw a secret mission card.

The goal is to achieve 12 victory points (we set our limit at 10 to speed up the game), and you get victory points primarily by attacking and winning. There are other ways to get points - Secret Mission cards - but most of those involve winning battles in certain locations, winning with certain kinds of units, or destroying certain kinds of enemy units. Given that all players are racing to the VP condition, there's no way a player can turtle and build up and win the game. This keeps the game moving quickly and encourages confrontation. 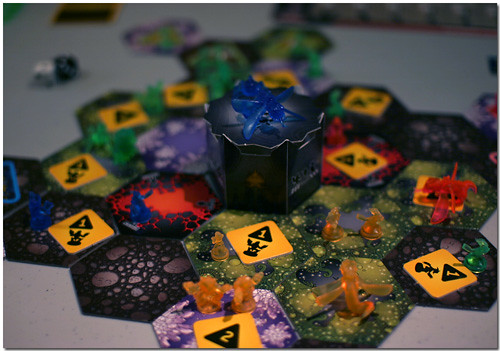 Matthew raced out to an early lead with 5 VPs while the rest of us were at 1 or 2. The rest of us caught up quickly and we were facing a close contest with everyone in the 5-7 point range. On what turned out to be the last turn of the game, Jacob asked me if I was going to be able to win on my turn (I think I had 6 points at the time) and when I said "no" he said "oh, I think I will then." And he did, winning a few one-sided battles that triggered some 2 point secret mission VP cards. Final score was Jacob: 10, Chris: 9, Julie: 7, and Matthew: 5.

Ratings on the game by the group were high - all 8s and 7s. Given the short play length (easily played in an hour or slightly more depending on the ending conditions) I think this one will come out more than usual.