Unfortunately (for her) Julie can only work into her schedule a single sprint triathlon this year. She had hoped to do the Mid-Summer Triathlon again at Blue Lake, but we had a schedule conflict with our trip to the midwest. She instead signed up for the Fort Lewis Triple Threat Triathlon held on Saturday at Fort Lewis (near Dupont, WA in between Olympia and Tacoma). I'm not on the triathlon circuit this summer, mainly because work + coaching baseball and football leaves no time for training. That's my excuse anyway.

Julie trained hard for this event, and even got some special conditioning training at the local YMCA to help prepare. She joined the master's swim program at the YMCA and held to a rigorous training schedule, focusing mostly on the running and swimming but with a lot of stationary bike work as well. Her training paid off as she did extremelly well this at this event. 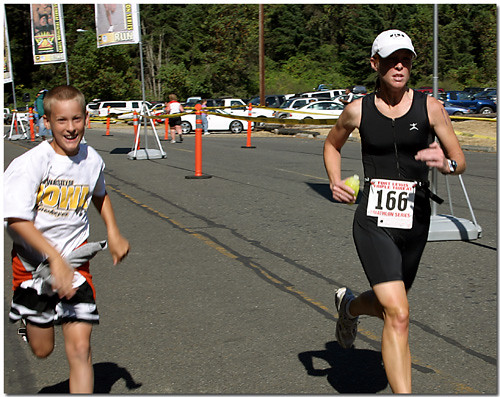 She struggled a bit at the swim, losing about 3 minutes off her normal pace due to some aggressive swimmers around her and a general sense of panic while in the water. In the future she may go with the second wave of non-elite athletes just to avoid some of the over-aggressive types. She more than made up for it in the bike and run, averaging over 20mph on the 15 mile run and running about 7:30 miles. She finished first in her age group and (we think) 5th or 6th overall for the women. Amazing! 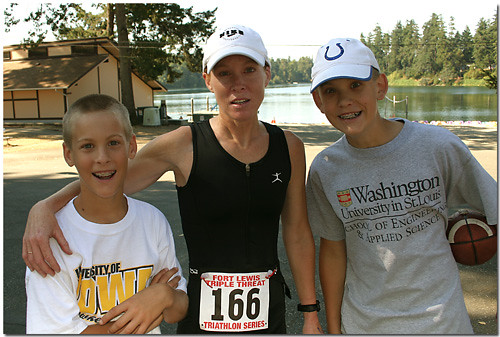 On the way back we we slowed down for a while due a horse trailer fire on the northbound I-5 stretch, I think between Centralia and Olympia. Second time I've been witness to a serious vehicle fire this summer. At least this time I was going the other way and didn't get stuck on the interstate for 90 minutes. 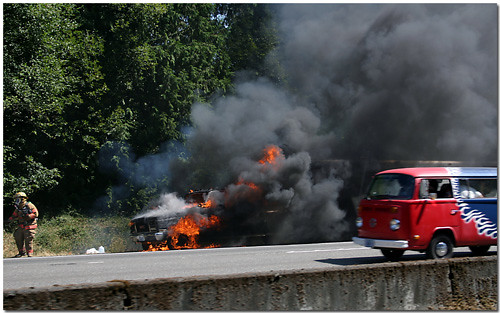