Things are not looking good. A bulk purchase of games at Funagain combined with a lack of playing time over the summer has really set me back on my quest to play all of my unplayed games in 2006. 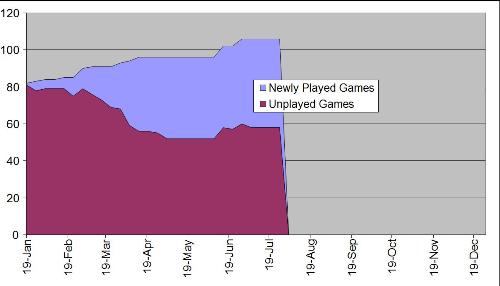 One of the first steps to recovery is admitting you have a problem, so let me just say it - without some other changes, I don't think I can complete this project in 2006. Time for some drastic action.

There are two changes I can make to get into recovery mode:

I've chatted with a few friends like Ken and KC about hosting a burndown party at my house - this is gaming where we focus on quantity, not quality. Maybe I'll give points to people that show up to help me knock down the list and do some weighted raffle prizes or the like. Given that we are entering football season and my Saturdays will be shot September-October, I may need to set aside a Sunday to do this.

The second bullet is more interesting to me and is where I think I can get more help from you, the reader. I'm going to list all of the games I own but have yet to play, and I'd like those of you with opinions to post a comment with a list of 5-10 games that you think I should dump from my collection.