I recently had one my best gaming experiences in a long while - a game of 18FL with Tim, Wes and Eric. You can read all about the details of the session over at Eric's weblog, so I'll use this space to talk about why I had so much fun and why I just placed an order for 1850. 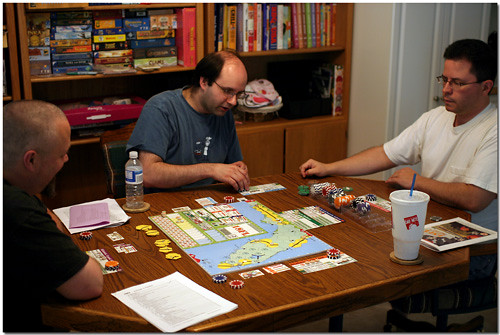 The itch to play an 18xx game has been with me for at least a couple of years. I even bought a used copy of 1830 on eBay a while back, a largely uninformed purchase that I now regret. Eric got a similar itch and has had Tim around to help him scratch it - they even attended an 18xx mini-convention here in Portland recently. April - July weekends are largely consumed with baseball for me so I was unable to attend.

I arrived a bit early so was able to check out the components - very impressive for what is nearly a print-on-demand boardgame publisher. Eric uses his on poker chips for the money but I think he regrets not including money in his customized order. I had a hard time remembering what denominations matched what colors at times. 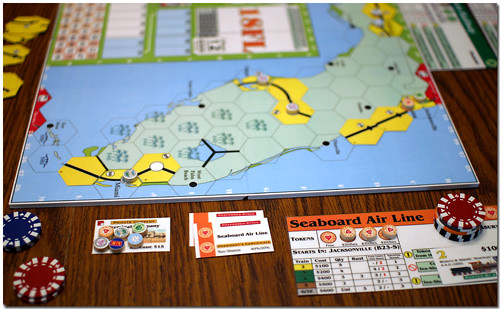 Allow me to explain the basics of 18FL. I don't yet know what attributes are in common across all 18xx games (though I can make educated guesses), so these basics may not map to the game you are thinking about playing.

The operations of the game felt like Age of Steam or Railroad Tycoon to me. The business aspects felt like Acquire or Indonesia. I love the blend and could easily see how the decisions I made as an individual and as a business owner would affect the outcome. I made a few mistakes but must have done OK as I ended up in a virtual dead-heat with Tim. Our scores were well within a rounding error of tolerance for this game (a fraction of a percent). I had a blast and can't wait to play again.

I ordered 1850 because it centers on the midwest area where I grew up, and includes the town of Burlington, IA. That happens to be the hometown of my parents and I'm taking my family there this weekend for memorial services for my two grandmothers who passed away earlier this year.

As a final note, Jacob and I took another run at Axis & Allies: D-Day. Jacob and I played while Julie and Matthew were away and I gave him a choice. This one hasn't seen much play since we got into Memoir '44, and I'm glad we brought it out again. We played with the special tactics / event cards, and I'm not sure if they add much to the game other than more randomness and fiddliness. Jacob enjoyed them though and he thoroughly spanked me as the Germans. I had horrendous dice rolls early on which sealed my fate. 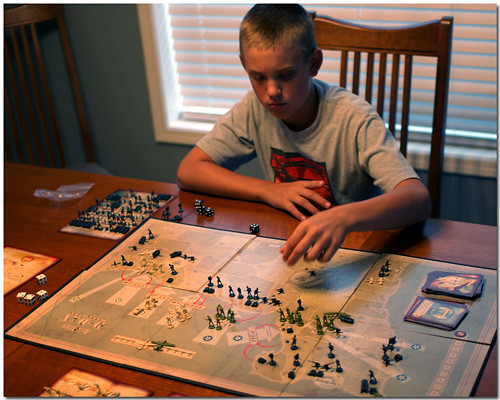