Magic: the Gathering is having a bit of resurgence around our home of late. Last weekend I pulled out the Ravnica cards I bought for the New Year's Gaming event out on the coast. The idea was to see if we could create some interesting draft tournaments from the card set.

We started by sorting all of the cards into common, uncommon, and rare piles - a total of about 260 cards. We shuffled thoroughly and created 9 simulated booster backs (12 commons, 2 uncommons, and 1 rare in each pack). Time for a booster draft with nine randomly chosen boosters. 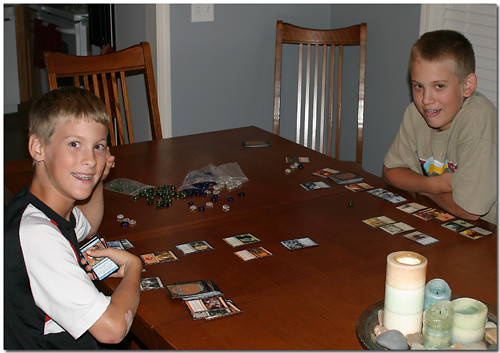 Now each player has some time (usually about 30 minutes, but we take less) to build a deck of at least 40 cards total, including lands. I like limited format events like this because it involves deck building, deck tuning, and playing, all in a short period of time. The meta-game of Magic (deck building and analysis) is appealing to many, but I only have the time and patience for it in a, well, limited way.

We had fun playing with our decks, and I continued to coach the boys on deck building and playing strategy. There are a lot of subtleties to play that a casual player overlooks. I wouldn't call myself an expert, but I do understand the timing rules pretty well and have a decent handle on play strategies. Oh, and everything I learned about strategy I learned reading the first 10 issues of The Duelist.

Last night the boys I did a backdraft, where you follow the booster draft format but instead are trying to draft the worst possible card set. From this set, one of your opponents will try and build a 40 card deck from the (supposed) trash you left. This is harder than it sounds, especially with a block like Ravnica which is designed to work fairly well with 3 or even 4 color decks.

Finally, I've decided to join a casual Magic: the Gathering Online league with Ravnica block cards. Matthew over in my Rip City Gamers group is running the league and it sounds like fun. I actually prefer playing Magic online (real-time) than most other online games (BSW, etc.). Should be fun.