This was a good weekend for working on the good ol' burndown list. We got back from the triathlon at about 3:30pm, and with Matthew away at a Portland Beavers baseball game, Jacob and I sat down to try a couple of two-player games.

First up was Turbo Taxi, the puzzle/race game from Queen Games. Players attempt to create a 3x3 grid of tiles that will adhere to a few basic rules established by the game, the players, and a bit of randomness. Jacob had a hard time initially, and I may have been a bit ruthless in solving quickly. I'm not a big fan of games like this (e.g. Ricochet Robot) but this one is short enough and easy enough to be a nice diversion.

Next Jacob and I tried the Tom Jolly game Cave Troll. I was surprised by this one, as I expected this to be more of a dungeon crawl / combat game. Instead I found a decent little strategy game with more depth than the name suggests. The game reminded me of Dungeon Twister, but it plays much faster and looks to scale pretty well with more than 2 players. The board doesn't get very crowded with just two players, so we didn't find ourselves competing much for gold, instead mostly just trying to outmaneuver each other. I won the game 57-52, so it was a pretty close match.

Ken and Brandon came over at about 6pm to play one of the biggies on my unplayed list - Quest for the Dragonlords. I'll be honest - as I read through the rules leading up to the game night, I was thinking to myself "man, we should just play Conquest of the Empire." I stuck to my guns, though, wanting to give the game a fair shake. The rules aren't very good - some editing and peer review would have been a good idea (note: I played the 1st edition, so maybe the rules have improved since). There are still a number of clarifications I'd like to have if I planned to play the game more, but we managed to get by. 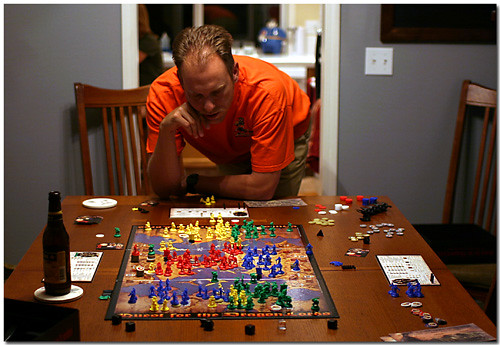 There's a lot of downtime in this game - way too much. It is also long, and I don't think the game when played by the full rules would ever be played in less than 3-4 hours. We played a shortened version we made up - when the first player got knocked out, we did a check to see who was ahead in gold production (a good proxy for the most territory owned). The quests have too many random elements and it was very frustrating not being able to manage the risk - a bad die roll or two and things can go sideways quickly. I managed to win, but we were all pretty anxious to be finished. I'm going to sell the game and the two expansions I have and donate the proceeds to a school program I'm starting this year - more on that in a future post.

Finally, we wrapped up the evening with a game of Loco!. This is a great little card game, and definitely an undiscovered gem in my collection. Brandon played very well, edging out Ken and I for the victory. Jacob was a distant fourth but had fun along the way. 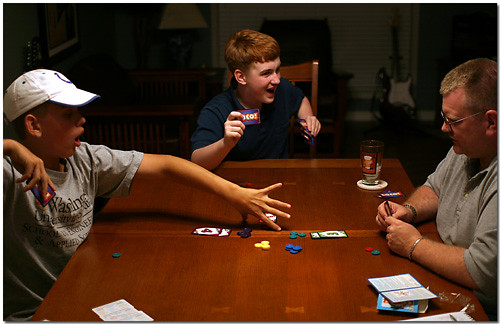