I joined a few folks at the Starbucks near Washington Square last night for a brief evening of gaming. Joining some of the regular Rip City folks was Ben Harris, early supporter of Havoc and brother of a co-worker at Corillian. I arrived a bit late and the crew was just getting started with a prototype under development for Sunriver Games. Hopefully I'll be able to talk about it more in a short while. 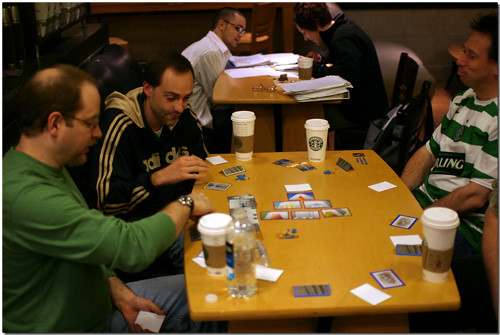 Mike was very eager to get out Pirate's Cove, the Days of Wonder remake of Piratenbucht. I've played Piratenbucht quite a bit but had never managed to play this version, despite the fact that I've done demos for Days of Wonder at the last two GenCons. This is partly because they rarely demo this game at their booth, reserving it for scheduled sessions in the gaming hall.

The rules are very close to the original with a few twists, so we were under way without much delay. The most discussion (of course) was about how to move the pirate. Of course, we settled on our home-grown semi-random Blackbeard variant, documented by our very own Dave and KC. 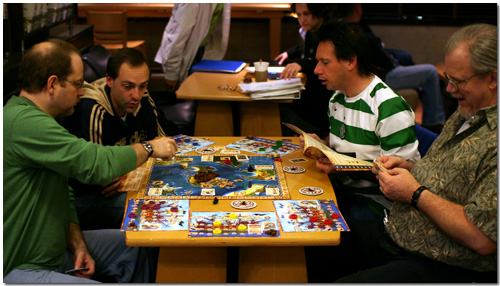 Despite getting beat up (by me) a few times early in the game, KC managed to end the game as the most famous pirate, finishing well ahead of the rest of us. I think I finished second-to-last.