Matthew had a birthday party to attend on Sunday afternoon for one of his fellow classmates and chess team members. As of Friday afternoon we hadn't yet chosen a present, so Julie asked me to pick up something from Rainy Day Games on the way home from work. I had a few choices in mind (Pickomino, some lighter card games) but decided to pick up my favorite "simple" Carcassone game - Hunters and Gatherers. The city is my favorite in the series, but a bit much for new gamers to learn from the box. 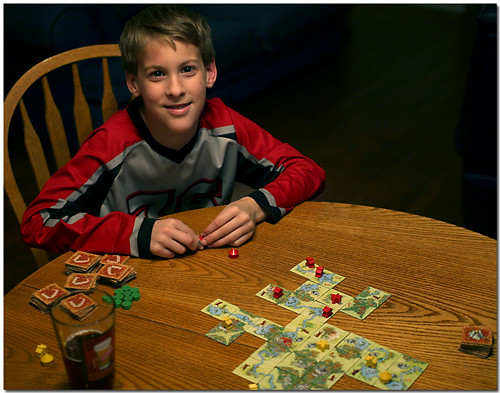 Matthew and I figured we better play it again so that Matthew could teach his friend how to play. The game wasn't very close - Matthew was pretty tired by the time we started Friday night and I had to remind him of the rules a few times - he had the hardest time scoring the fishermen.

Saturday evening Jacob and I broke out my copy of Zero!, volume 3 in the Down in Flames series. I picked this up along with Corsairs and Hellcats in a GMT sale a year or two ago. This is a card-driven WWII air combat game that feels a lot like a CCG without the collecting. We played a simple element (figher & wingman) vs. element dogfight to get a feel for the rules. There's a lot more in the box than just the cards for the air combat, including bombers and a well packaged campaign game covering the early part of the Pacific war (Corsairs and Hellcats covering the later part). 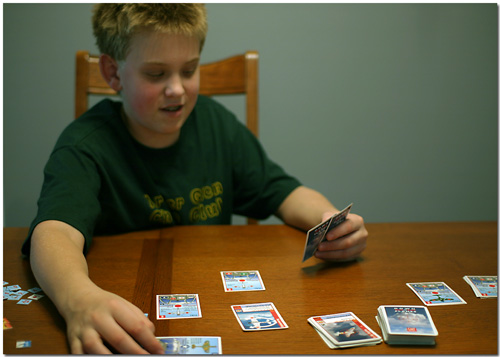 The game was very easy to learn and Jacob (playing Japan) managed to shoot me down without taking any damage. I just couldn't get into any sort of advantaged position, and it seems to be tought to come from behind once you start to lose it. I suspect the game is much more interesting with multiple elements where other pilots can come to the aid of one in danger and force an attacker to back off. Jacob had a great time and looked very interested in trying the campaign game.

Sunday morning we all ran in the Shamrock Run in downtown Portland. Julie and I were signed up for the 8k, the boys the 5k, but once we looked at the race schedule we decided to all do the 5k rather than keep the boys waiting for an hour after they finished. Jacob and I planned to play a full game of War of the Ring that afternoon, but I got a call from Ken late morning and we agreed to play. That allowed Jacob and Brandon to play some XBox 360 and PC games.

I had the game setup by late morning. Ken arrived around 1:45 and we started our game at 2:15, with Ken playing the Free Peoples and me playing the Shadow Armies. Like any game of this depth and complexity, things were a bit slow at the start as we worked out the rules. Of particular help was a player aid / turn summary from BGG - I strongly recommend using this one for each player as it is much better than the aids that come with the game. 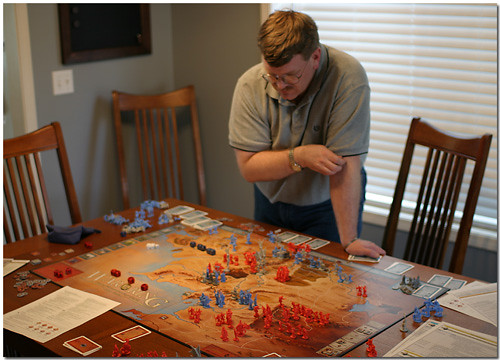 This is a very well designed game - I'm anxious enough to play it again that I'm willing to defer playing some other big games on my list for a few more chances to play it while the rules are still fresh in my head. We both fumbled around quite a bit with strategy as the choices often are pretty non-obvious. It also hurt not knowing what the cards had to offer (we didn't even scan them ahead of time). Ken managed to kill of Saruman within 2 turns of his entry into the game, and I managed to steal 6 VPs from strongholds that he left unoccupied. The tension was great as I moved to 9 VPs (needing just one more to win), with Ken at 2 VPs (needing 2 more for a military victory), and the fellowship on the doorstep of Mordor.

This is where I made a critical mistake, leaving Moria unoccupied as I raced up to Rivendell to capture the stronghold. I even had a chance to muster a unit into there, instead opting for a Nazgul (useless by himself) and counting on another muster the following turn. Well, I rolled three "eyes" and three "palantirs" on my next roll, and had no way to get any troops into Moria. Ken got the movement dice he needed and proceeded to walk into Moria unmolested, resulting in a military victory for the good guys. I ended with 8 VPs. Overall one of the best gaming experiences in recent memory - I'm glad I finally took the time to get this one played.