Matthew and I sat down to for a first playing of the Eastern Front expansion to Memoir '44. I've read elsewhere that people have been able to pack all of the expansions into the original box, but I don't see how that's possible. To be precise, I suppose they fit but the lid definitely doesn't close down all the way creating an unsightly bulge when on the shelf.

We somewhat arbitrarily chose Breakout at Klin as the scenario, but it was a good choice as it used the Blitz and Russian Command rules. Memoir is the sort of game that for some reason is tough for me to get out with Matthew, but once we start setting up his excitement grows and grows. The pieces, the map, and the anticipation all add up to some nice pre-game excitement. 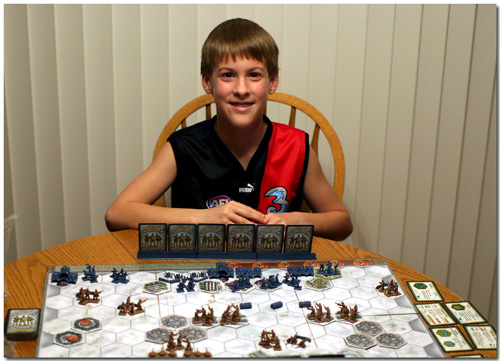 The Russians need to take a very defensive stance to win this scenario, I think, and I was a bit too slow in setting up my defense of Golyadi on the left flank. I managed to pull back my infantry there, but did not provide enough support and that proved to be my demise. I scanned the message boards on the Days of Wonder site a bit to see if we played the victory medals correctly. There are two towns of two hexes each, and the scenario rules say that you place a victory medal on each hex in the towns, for four total. It seemed odd that the German player could get two medals for just capturing the town of Golyadi, especially given how crippled the Russians are with the weak command structure. Richard Borg himself answered in the forums that this is indeed correct and that it is very hard for the Russians to win.

The Blitz Rules give the Germans two key advantages: 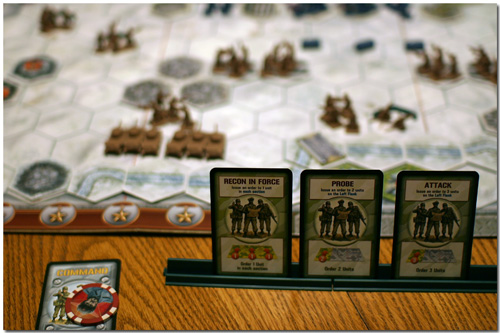 The only exception is that the Russian player can still play Recon 1 cards at will from his hand, and can reply with Counter-Attacks and Ambush cards.

I like this rule. It makes the game a bit more strategic for the Russian player and is an appropriate way to simulate the inefficient command structure.

In the end, Matthew and the Germans won the scenario 6-4. Matthew took much pleasure in showing me how he could win three different ways in his last turn. That's OK - him winning likely brings him back for more, which is just fine in my book.