Cool - twice in two weeks I'm able to hook up with a local gaming group while away on business. Last Thursday I joined David Fair and a group of his gaming friends at the Game Parlor in Chantilly, VA, a short 10 minute drive from my hotel near Dulles airport.

The Game Parlor is an outstanding game store, both in terms of selection and gaming facilities. There were easily over 15 tables available for gaming - there was a CCG tournament going on, folks playing miniatures, a game of Ticket to Ride, two wargames, and we didn't feel squeezed at all.

David did his homework and new I was a fan of For Sale, so he offered that up as an opener. As straightforward as the game rules appear to be, I quickly learned that this group plays the game much differently than I have. You can check out these two threads on BGG for an example of the confusion. I've always played that you lose have your bid in value to the bank when you don't win the auction. These guys play that you lose half your chips to the bank, making the use of the $2 chips meaningful in more ways than just the increase bidding. 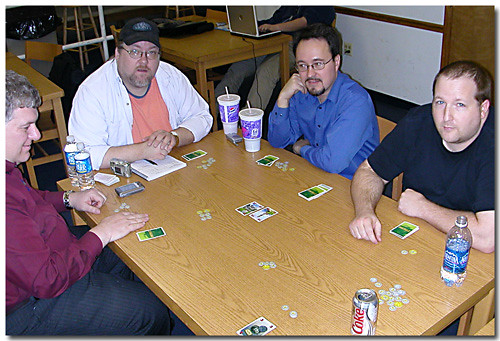 I'd like to blame confusion over this rule on my poor play (I finished dead last), but alas I just played poorly in the first round of auctions, making it very difficult to have any kind of strong showing in the blind bidding phase.

David recommended San Francisco for our next play - apparently this is a solid game for five players. To learn more about the mechanics of the game, check out this review by Brian Bankler. While I greatly enjoyed the other players and some aspects of the game, a few of the mechanics left me cold. The human factors in the game are also a big challenge (this was also called out in Brian's review), causing mistakes by several of the players at different times during the game.

My primary complaints were about the bidding mechanics. On some of the auctions, you are trying to choose a type of building type that the others won't choose (residential, recreational, or business). While there's some information on the board to help guide a player's choice, this felt very much like Hoity Toity to me - and most of you know my feelings on Hoity Toity. The other mechanic that was annoying as hell was the influence auctions. Players each choose an influence card ranging from 0 to 9 points. The auction might give the prize to the top 2 bidders that don't tie. So if three players each bid 9, one bid 1, and the other 0, the players who bid 1 and 0 would win the auction. This leads to similar attempts to out-think your opponents and left me cold. 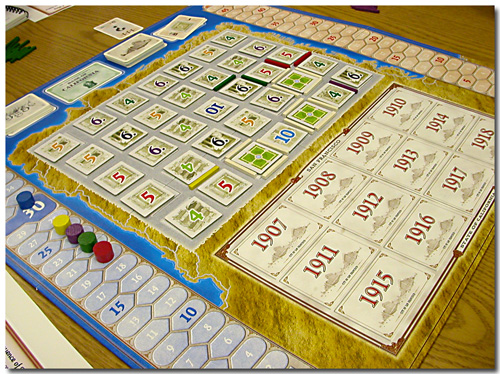 I think I finished in last again on this one, but the game was a bit closer and given one more turn I might have moved up to third or fourth place.

We wrapped up our evening with a game of Formula Motor Racing after adding a 6th player. I had seen this played over at Doug & Mimi's but had not played it before. This is a great little game and a solid choice for six players - one I might consider adding to my collection. 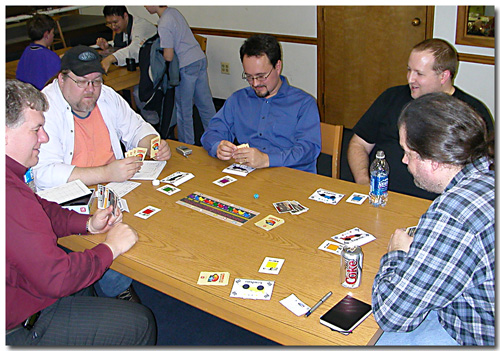 Adding to the appeal was the nice little track accompanying this game (don't expect to find this in the box - this was fan made and I don't even see a file on the geek for it). 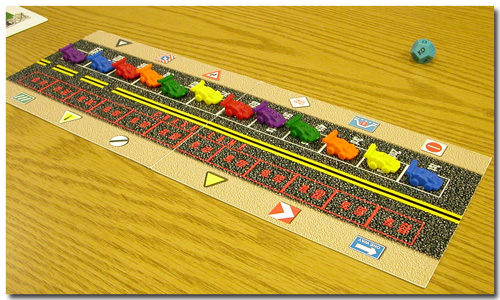 We spent some time chatting after gaming about travel, Essen, and the Gathering. I also picked up a copy of Roma from the store - I felt obligated to pick something up after taking advantage of such a fine gaming facility. A good purchase as I'll illustrate soon. Thanks to David & co. for your hospitality and company. I'll check in again next time I'm in the area.