Last week before my trip to DC we worked in a game of Pueblo before bedtime. This was an Essen pickup for me, and as an abstract, one I thought might really appeal to Julie. This is a tough game to visualize and pick up quickly - Matthew had a hard time visualizing what the chief would see as he walked around the pueblo. 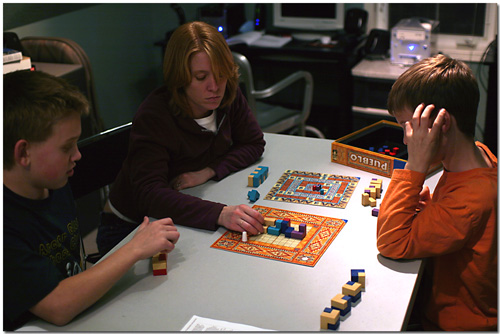 By all accounts I had a strong lead going into the final pass around the town, but Julie did such a nice job hiding her blocks from view towards the end that she quickly caught up with me (or, rather, I quickly caught up with her in penalty points). We ended up in a tie for first. A solid abstract that I'd like to try again soon.

Today was a free Sunday afternoon and a chance to try out Descent: Journeys in the Dark. I picked this up at Rainy Day Games after collecting my auction proceeds of about $55. We played the introductory scenario with five players total. 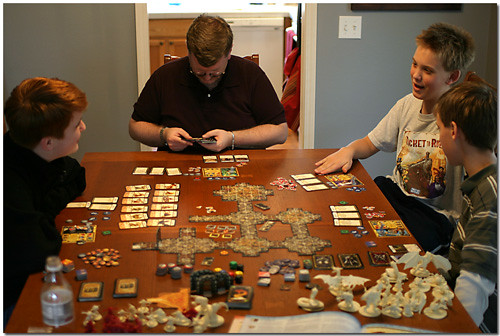 Gameplay is very similar to Doom, but with many more chits, cards, and miniatures. The first 3/4 of the game appeared to be much too easy for the heroes. None of the monsters I could summon up seemed to be a challenge to these guys, and about the only way I was able to do damage was through traps. They accumulated a ton of quest tokens and magic items along the way, and it looked like it would be a very one-sided affair. 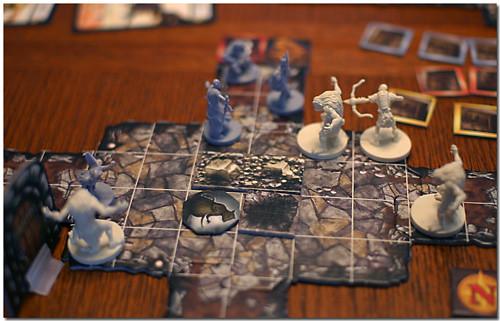 Things changed dramatically in the final boss room when I had the giant jump stand over the pit for a raged sweep attack, killing all four characters with a single blow. They were all a bit weakened, but this was devastating to the team and made the game much closer as a result. They were clinging to just 6 tokens (with my deck running down to the last two cards as well) when they managed to finish off the giant and win the game. I think it was a big hit for everyone.

George and Sean stopped by for a while to hang out and play some kiddy games. Sean had a lot of fun with the cats and it was great having him around for a while. Very social, bright kid. 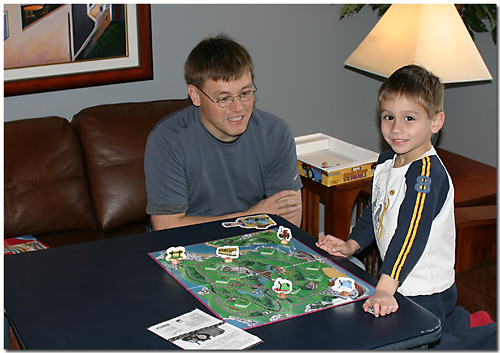 We had about an hour left after the Descent game finished, so Ken and I tried out my new copy of Roma. What a nifty little two-player game (make sure you check out Dave's Roma on Roma post) - very easy to learn and play, and we finished two games in about 50 minutes. This is the kind of game you'll want to play again right away after playing. There is a decent amount of luck to the game, but I suspect good strategy will dominate over time. 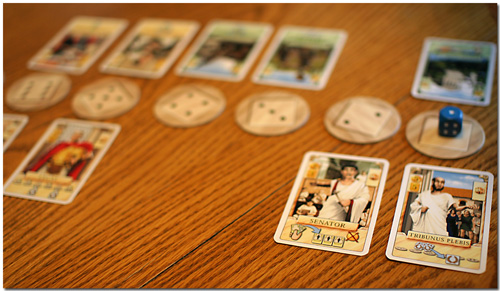