I'm hooked on not-too-obscure musical references. Or maybe it was too obscure - you tell me.

Anyway, I spent last week in Birmingham, Alabama on business. Knowing that I would finally have a night free on the road to get in some gaming, I reached out to spielfrieks and got a positive response from Chris Comeaux. He was kind enough to grab a few of his friends and invited me to his place on the southeast side of town.

We had the usual rumblings and indecisiveness about what to play with four players. Someone mentioned Torres, and while I really wanted to knock something off my not-yet-played list, I agreed that this was a perfect choice. I had just learned to play it the weekend before and was eager to try it again and refine my understanding of the rules. Good thing, because I had missed a few key ones in my first playing. Only Chris and I had played before (and not much at that), so this was very much a learning game for everyone. We ended up with a small concentration of very large, very tall (and flat) castles neutralizing much of the scoring opportunities (or at least differentiation opportunities). Interestingly, nobody scored the king bonus in the 2nd or 3rd round. 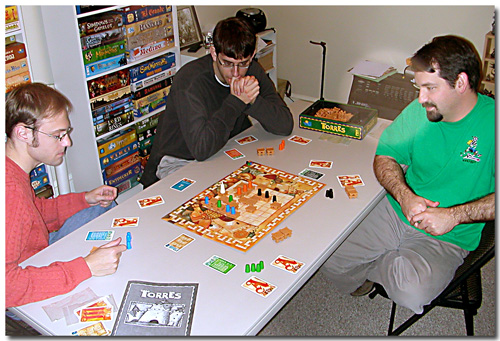 I managed to pull ahead of the others by getting in the mix in all of the castles and getting to the top of the biggie.

Next up was Domaine, again a game that only Chris and I played. This was my fourth or fifth play, and I've never won the game. My winless streak continued, with Chris crushing the rest of and getting to (I think) the magical 30 points forcing the end of the game.

One reason Chris won by such a large margin: the three losers had too much in-fighting in one corner. I got a bit snippy with Christian when he stole a knight from me, taking away any opportunity to defend myself against Chris (yes, there was a Chris, a Chris, and a Christian at the table) without gaining much for himself. At that point, though, the game was already lost and it made sense for him to jockey for some position against me. I probably could have more effectively used some diplomacy to unite our forces a bit.

Overall, two great four-player games and it was a great way to spend a Monday night out on the road. Thanks Chris for hosting and I'll look you up again when I'm in town.