Turns out I'm the Geek of the Week over on Boardgamegeek. Check it out and feel free to ask some questions.

Time to catch up on some session reports. Two weekends ago, the boys and I broke out Pizza Box Football to play during the conference championship games (Tivo'd, of course). We played a simulated playoff (Steelers vs. Broncos, Seahawks vs. Panthers) and Superbowl using the expansion rules and teams. 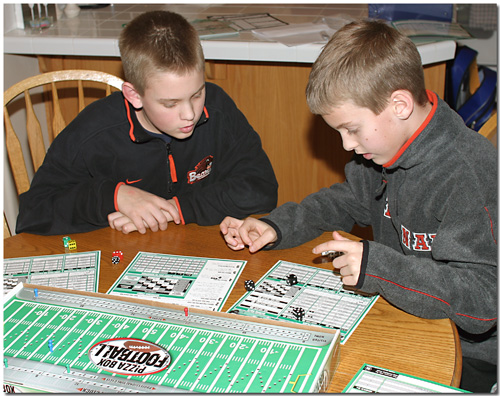 This is a great little game - one of the best football simulations I've played. I'm not sure the expansion rules add much other than confusing extra cross-references, though the choices of more offensive plays (play action, screen, draw) and higher risk defenses (blitzes) are a nice touch. Some may say simulation is too strong a word for this game as it doesn't even try to simulate individual player actions. What the game does simulate is the play-calling of football.

Yes, there's a decent amount of luck in the game. I was reminded of this repeatedly in my game with Matthew. 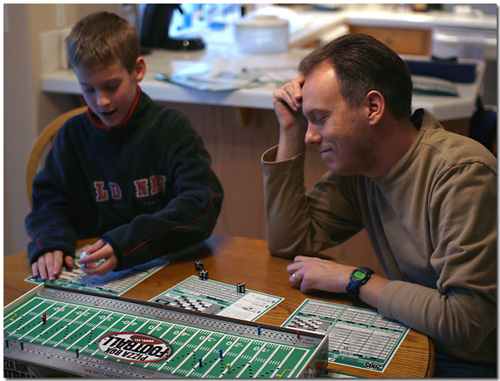 Yesterday the boys and I tried out scenario 2 of Doom: the Boardgame. This game hasn't seen very much action, partly because it is a bit longish and partly because it seems pretty hard for the heroes to win. I've also been seriously thinking about trying to trade it for Descent, a game I think would come out more frequently. 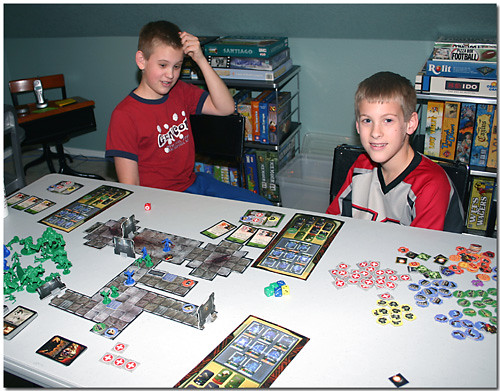 It was rough going for the marines this time around; perhaps I was too hard on them but I just can't hold back. They made it to section 2 but were soon overwhelmed and I accumulated 6 frags to end the game. It was a fun experience and I don't want to sound too harsh on the game.