After Jacob's Game Maker class two Saturdays ago (January 21) we drove up to northwest Portland to attend the GameStorm game day. I was pretty amazed at the number of people attending - I counted at least 30 people there by the time we left in the early evening. There was quite a variety of gaming going on, including Caylus, World of Warcraft, Liberté, and Ticket to Ride.

Eager to knock a game off my burndown list, I brought out Ark of the Covenant and snagged a few players to join me. This is just another Carcassonne variant, but it combines several aspects of other expansions that I like. Now I should have read the rules a bit more carefully ahead of time, because there are a few easy-to-miss scoring rules (scrolls in cities, oasis by the road) and you ALWAYS have to check how unfinished roads and cities are scored. Nonetheless, this is a fun variant and we had fun moving the ark around. Jacob one handily if I recall. 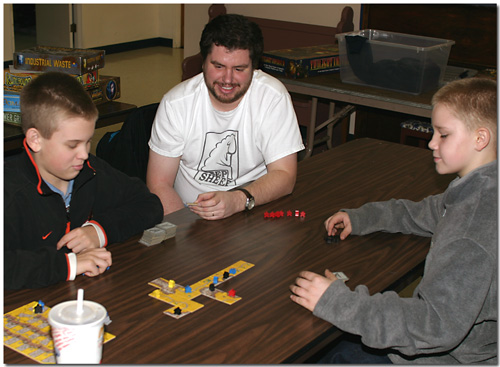 One of my main reasons for attending (I skipped a Roads and Boats session, after all) was to get in another play of one of KC's classic prototypes, Isla Nova (aka New Eden 2 aka Edenborough). Ken and Carey joined Jacob and I and it was as fun as I remember - definitely one of our short-list games to try out in an upcoming playtest day. 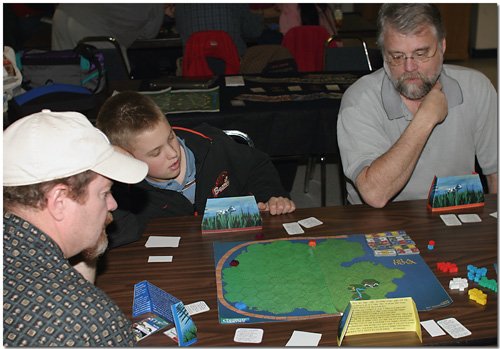 This is a tile-laying game and is quite abstract, but it is rooted in a colonization theme where different communities or tribes are establishing competing industries. The game played in just about an hour and felt very rewarding. 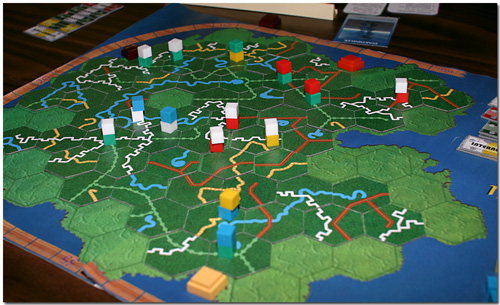 Next, Jacob and I played a 2-player prototype of Carey Grayson's new game 24/7. This is a light abstract designed primarily for 2 players and it involves laying down domino-shaped tiles on a 7x7 grid. You score points when you lay a tile that creates a sequence of tiles (in any direction) that add up to 24, 7, form a sequence, create 3 or more of kind, etc. 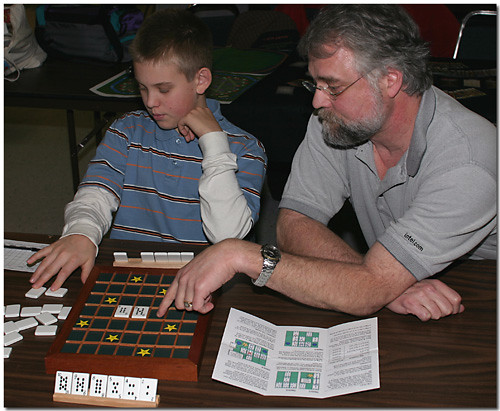 The game was quite fun and had Jacob and I captivated - plenty of tension, easy to teach, and great potential. I hope Carey can get this into mass production.